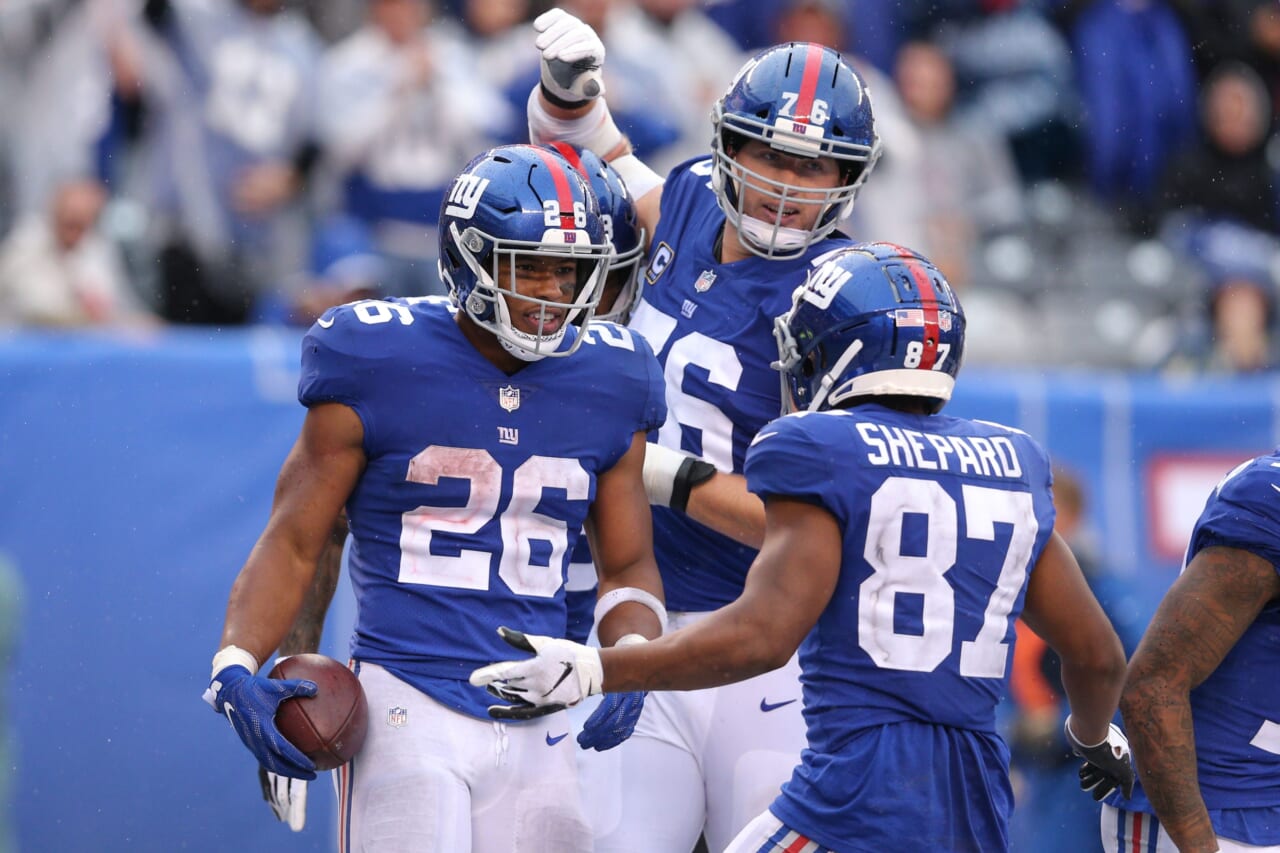 The New York Giants are in a delicate state right now, and the media has a ton of influence on the emotional balance of the team in the locker room. Letting the outside noise in is what helped cause a meltdown with former head coach Ben McAdoo leading the way in 2017.

Recently, reports have emergered detailing the frustration of various players, especially in regard to the play of Eli Manning and his ability to be successful in the NFL at this point in his career.

Well, maybe not in the locker room, but we have certainly heard it in the ESPN studios. Odell Beckham Jr.â€™s comments about Eli in his infamous interview with ESPN did not go unnoticed. He made it apparent that Manning isnâ€™t going to be moving out of the pocket and that he hasnâ€™t been getting the ball down field to the star receiver.

This could be taken several ways. Either, itâ€™s Manningâ€™s fault for not giving the offense a chance downfield, or it could land in the lap of HC Pat Shurmur and his play calling. No matter the blame, itâ€™s still a negative shot at someone, and thatâ€™s unacceptable. Shepard said the right thing in defending his quarterback and ensuring that thereâ€™s no issue behind the scenes, but can we really believe him? A 1-5 start, a starâ€™s wayward comments, and a clear lack of effort against the Eagles would indicate otherwise. 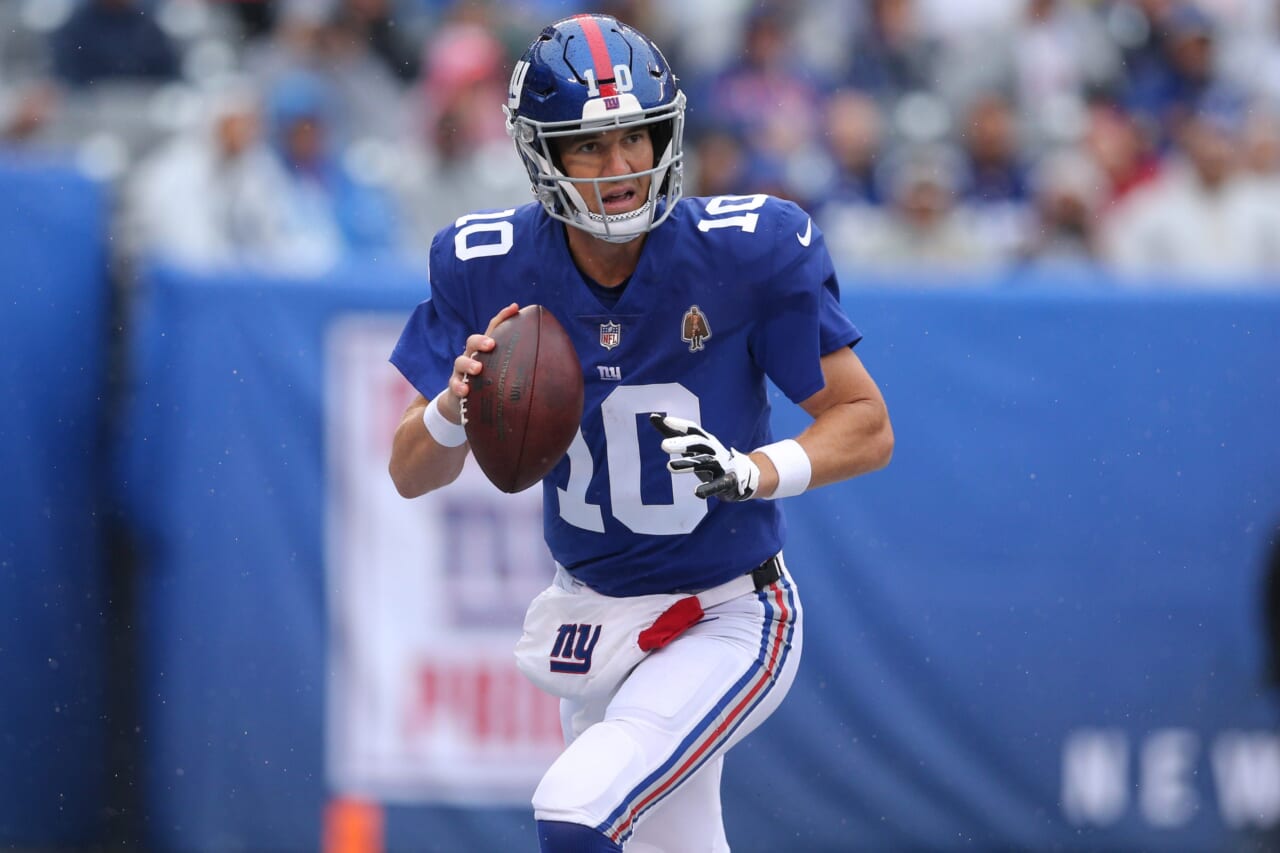 I woke up this morning still feeling upset and embarrassed from the showing that our New York Giants displayed last night in front of a national audience. Â I have been very proud to say that my team is the New York Football Giants and last Thursday was the first time were I actually felt the opposite. Â I felt embarrassed for our fans, casual football fans who were subjected to watch that awful display of football and most importantly, our players that care, which there was only one, Saquon Barkley.

We stink. Â Plain and simple. Â I like to think of himself â€œa realistâ€, a person who lives in reality, accepts the situation and who is prepared to deal with it accordingly.â€ Â I saw that people actually believed that the Giants still had a chance to make something out of this season, which we did, until we flushed it down the toilet last night. Â It all sounds good to be optimistic, but as a realist, itâ€™s always in the back of my head, â€œI know this team. Â We arenâ€™t coming back. Â We arenâ€™t good. Â We arenâ€™t winning more than 4 games let alone the division, etc.â€

Next, Eli is done, but we all knew that. Â It was a great run, he got the franchise two Super Bowlâ€™s, but itâ€™s time to move on. Â The countless boos last night has to register within him. Â Itâ€™s time we cut ties. Â You canâ€™t have a quarterback that only can throw checkdowns, who canâ€™t scramble, who sacks himself, who canâ€™t hold onto the football, who throws into the tightest of windows and who canâ€™t find his open receivers. Â Itâ€™s like watching a slow moving car crash anymore. Â Watching your team is suppose to be fun, this is not fun.

Next, the Giants should not be playing Primetime games. Â Football fans should not have to watch the Giants, their awful football and player antics. Â Itâ€™s embarrassing. Â Our next two games should be flexed, Iâ€™m serious. Â Weâ€™re a laughing stock. Â We are the new Cleveland Browns. Â It finally hit home for me and I completely agree with all sports radio hosts and analysts who say the Giants are miserable to watch on Primetime, Ryen Russilo and Barstoolâ€™s Pardon My Take to name a few.

Iâ€™m literally at a lost for words. Â Players are calling out Eli. Walking off the field. Fighting inaminate objects again. Â Being Divas. Â Season tickets holders are selling their tickets. Embarrassing is the only word to describe this team currently.

Regardless of the previous weeks performance, I always get up and excited for games. Â But, after last night, I think that has changed. Â I am no longer feel the fire to watch this team for the rest of the season. Â Donâ€™t get me wrong, I will be watching solely because of Barkley, because heâ€™s the only player cares. Â Anymore, Iâ€™ll be just sitting their, quietly, watching the game, not getting to high or low because itâ€™s not worth the pain and mental stress this team puts on an individual to care when the team is itself doesnâ€™t care.

The season is officially over. Â Teams donâ€™t tank, but with the piss poor effort the Giants displayed, minus Barkley, against the Eagles that how the fans should respond. Â Shumur and his coaching staff lost the locker room already. Â However, you canâ€™t blame the defense for the most part of the game, they played well. Â My guess is the defense got pissed off at our horrible offense, minus Barkley, because the defense does all the work. Â Then, out trots the offense for, most likely, a 3-and-out that lasts less than two minutes. Â Itâ€™s disgusting and predictable.

I wrote a piece earlier about how Barkley is going to be wasted within this team and itâ€™s became true last night. Â Barkley is a beast and without him this team would be completely unwatchable. Â Theyâ€™re kind of unwatchable now, but Barkley brings excitement and hope, sorta. Â He idolized Barry Sanders and he might turn into him too, meaning one of the best running backs ever, but had to play on crappy teams. Â Itâ€™s so sad. Â I feel bad for Barkley this season, regardless of stats.

The season is over. Â Itâ€™s time to move on from Eli. Â Lauletta needs to start playing and at this point, fans will welcome the change or sign Kaep or tank for a quarterback. Â Itâ€™s whatever, I just shrug my shoulders anymore and say, â€œThatâ€™s Giants football.â€ Â Weâ€™re a laughing stock. Â Weâ€™re the new Cleveland Browns. Â Weâ€™re the worst team in the league. 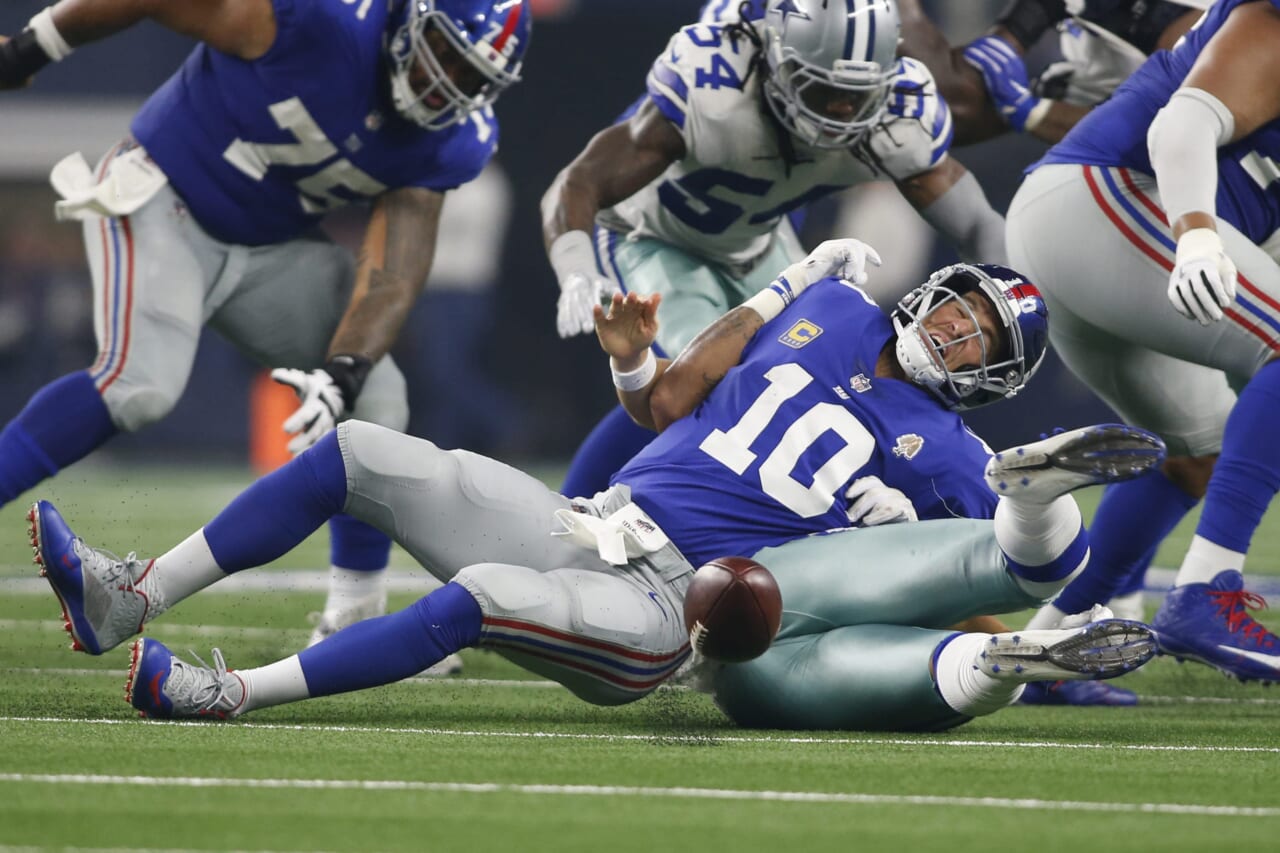 It’s no secret that Eli Manning hasn’t performed up to his old standard this year, for whatever reason. It could be because of age, playcalling, the offensive line, or some other issue, but the fact of the matter is that the passing attack of the New York Giants isn’t one to fear… Despite having talented receivers such as Odell Beckham Jr. and Sterling Shepard.

But it’s not just the fans that believe Manning is in decline. Former Giants quarterback Phil Simms also believes that Manning’s time is running out, and he spoke about it on XM Radio. “OK, when you phrase it that way, as a big-time starter he is [done].”

Simms went into more detail about the situation, and what it means for Manning. “The Giants built this team for this year for Eli Manning to have success. Thatâ€™s what they did. They re-did basically the whole offensive line. Theyâ€™ve signed Odell Beckham, Jr… They draft Saquon Barkley, which is a great deal… Sterling Shepard, a good second receiver. Evan Engram, we know heâ€™s hurt, but itâ€™s all there because we want the quarterback to do well, and itâ€™s not working out.”

Of course, the offensive line revamp hasn’t worked out as well in reality as it should have based on preseason estimates. Nate Solder hasn’t performed well enough to justify his huge contract at this point, and Patrick Omameh hasn’t been much of an upgrade. You could make an argument that most quarterbacks in this league would struggle behind this line, but that doesn’t change the hard facts that the passing offense isn’t helping nearly enough to win games.

Eli Manning’s mobility has been much criticized this season, and Simms also touched on that. “I watch all these guys every week. And Iâ€™m watching Phillip Rivers going, â€˜Look at him.â€™ Now, I know he has a better line and heâ€™s got a set of really terrific receivers. But he is scrambling, outside the pocket, moving, heâ€™s great in the pocket moving. Tom Brady is truly great in the pocket. And I just donâ€™t see that enough from the Giants with Eli and thatâ€™s a big problem.”

All of these signs point to it being Manning’s last season as a starter, or at least his last season as the uncontested one. The Giants will be in the running for Oregon star Justin Herbert, but there’s still a lot of games left to be played. The quarterback situation going into the next season is murky at best. There’s a lot of unknowns. But regardless, the odds do not look good for Eli Manning to continue in the same role at this point, with mounting criticisms. 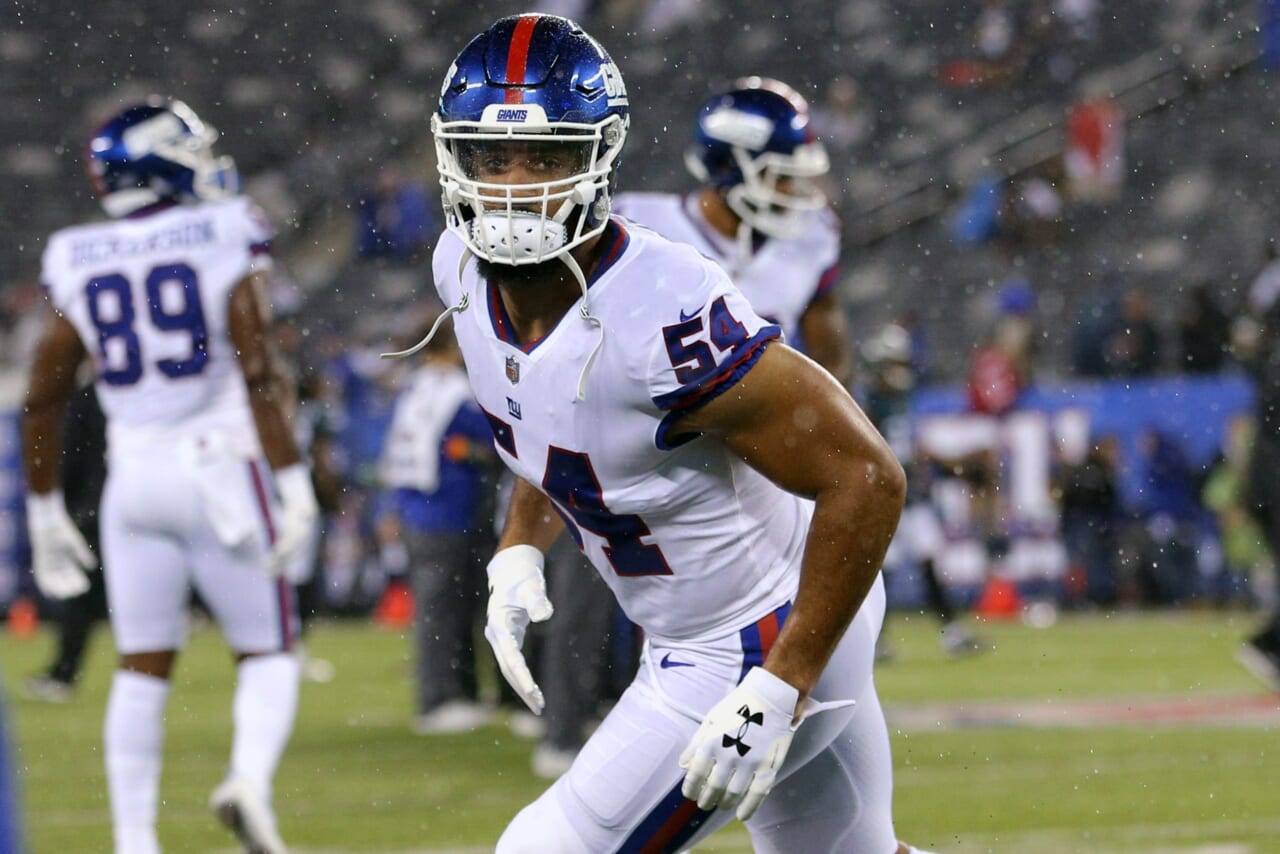 The New York Giants’ pass-rush was an abomination leading up to the week 6 matchup against the Philadelphia Eagles, ranking last in the league with just seven total sacks. The return of outside linebacker Olivier Vernon presented a burst of ability on the defensive line, and despite a truly awful display by the entire team, Vernon had a solid game.

The Giants’ best pass-rusher recorded two total sacks, one sack, one tackle for a loss, and two QB hits. His first performance of the season was stellar, especially since he was facing off against Jason Peters, the Eagles’ Pro Bowl left tackle.

Vernon didn’t play 100% of snaps on defense, but he was out there for a solid chunk, until the game got away from the Giants going into the fourth quarter.

Here’s a pressing question that must be answered at the end of the season:

Should the Giants cut Vernon and allocate his cap-space towards other positions?

Vernon has been productive when on the field for the Giants, despite having a lower than expected sack margin. Exempting the current season, Vernon has only amassed 15 total sacks in two seasons, but has a solid 35 QB hits. Last season was a struggle for the edge rusher as he struggled with a wrist injury and a high ankle sprain. With the demise of the team, his production fell off significantly, but was still considered one of the better pass-rushers int he league.

Vernon will earn $15.25 million in 2019, but his contract has an out that would make him a free agent and count $8 million in dead cap. Cutting him would clear up $7.25 million in cap-space, which might not be worth it when considering his value when healthy.

Personally, I don’t think the saved cap would be able to compensate for the influence that he has on defense. As an outside linebacker it was expected that Vernon would be more successful, especially on a James Bettcher led defense. The bottom line, the Giants might be better off keeping him than sending him on his way next year.