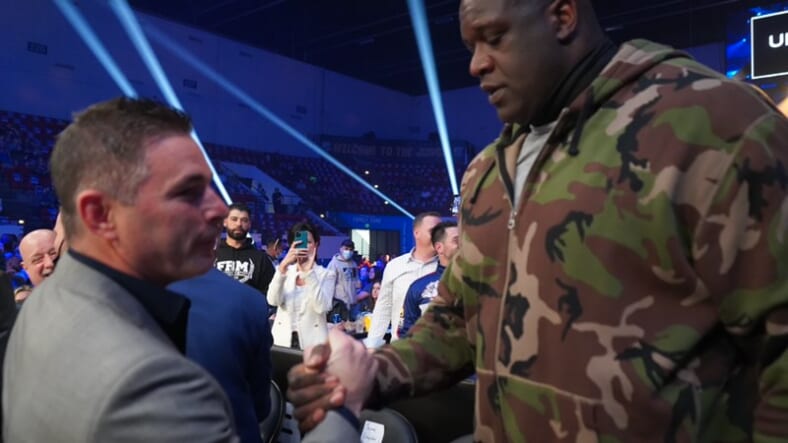 NBA legend Shaquille O’Neal and the Bare Knuckle Fighting Championship is closing in on a deal that will make him an investor in the company.

The two parties have advanced past preliminary talks following the smashing success of BKFC’s KnuckleMania last weekend in Florida.

O’Neal sat at ringside and presented the BKFC bantamweight belt to Dat Nguyen in the BKFC’s latest pay-per-view event that drew record numbers for the two-year-old company.

“We’re working out the details right now. He’s very interested. [Shaq] loves the product. [He] loves what we’re doing. I think he adds tons to value to us,” BKFC founder and CEO David Feldman told Empire Sports Media in a phone interview. “We’re dealing with his team now and tying all the loose ends, but I think it’s gonna be a done deal. Everybody in the world knows who Shaq is. He’ll be a great addition to our family.”

The KnuckleMania was the first combat sports event in the US to have live fans, thanks to stringent health protocols which BKFC put in place.

The new fast-paced and exciting combat sport founded by Feldman in 2018 has made a steady rise, which peaked over last weekend’s fights.

“It looks like we’re trending towards the 100,000-mark of live viewers in the United States. And worldwide—we had international deals this time—the feedback from the networks that we sold to, it looks like about anywhere between 12 and 15 million live viewers,” Feldman said.

And one of those captured by BKFC’s rapid growth is O’Neal, who has been following them for a while now.

Shaq is a huge BKFC fan

O’Neal told USA Today that BKFC is the “future of fighting” and called its fighters “the toughest athletes in the world” for not using gloves. O’Neal also revealed that he came across the new sport through a friend.

“He was watching it on TV a lot, and he started communicating with us, and then in December he came to our event, and he really, really liked it. It piqued his interest even more, and we’re almost there [with the deal],” Feldman said.

The unassuming BKFC CEO did not believe at first that O’Neal was a huge fan.

“He reached out and said, ‘I love what you guys are doing…’ Then I message back, ‘Is this really Shaq?’ Then he put a video up and said, ‘Who else would it be?’ And it was pretty cool,” Feldman recalled.

From then on, O’Neal and Feldman were in constant communication. After the NBA Bubble last year, O’Neal finally had a chance to watch a BKFC event live.

Aside from the looming partnership with O’Neal, Feldman also shared that a couple of networks have reached out to him after the KnuckleMania.

“We’re definitely in talks right now. We are building our brand, which is the Bare Knuckle TV, and we have our app, but we definitely want to have a platform/partnership [with an established TV network] because it will just add more eyeballs, and that’s coming. It’s certainly coming,” Feldman said.

The BKFC will have their next event dubbed as “Bare Knuckle Kingdom” 1 in Thailand on March 5, and Feldman said, “international expansion is definitely on the horizon.”

“We have a fight in the UK during the first weekend of April. As far as really going global expansion, it’s obviously right now just depends when COVID-19 goes away or subsides,” said Feldman. “The plan is to take this everywhere. Everybody is calling.”

Groups from Africa, Japan, Russia, and Brazil have shown interest in hosting BKFC events. Even fighters from boxing and MMA have sent feelers to join their organization.

“They’re all reaching out. Some top UFC fighters came in during the weigh-in and the press conferences, and I said, ‘You know, you’re gonna like this new sport, and they all said, ‘Nah.’ Then after the fight, they all came over and said to me, ‘This is amazing! I can’t wait to do this,'” Feldman said.

Feldman also can’t wait for what’s coming next for BKFC.