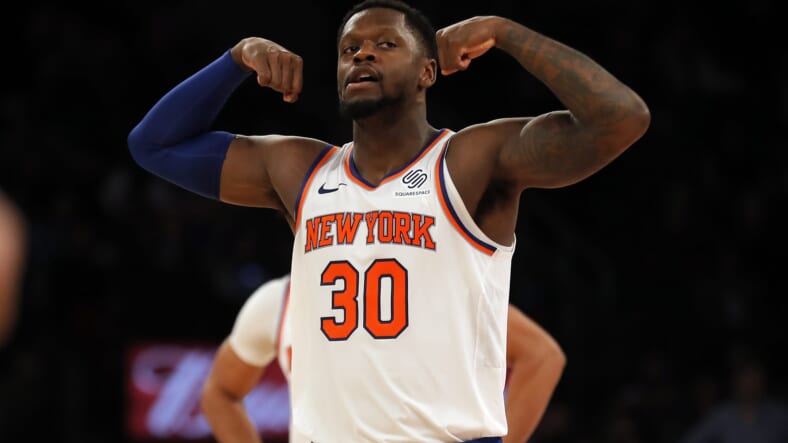 Julius Randle hasn’t been to the NBA All-Star game, nor he’s been part of a winning team.

On the eve of the last day of the NBA All-Star voting for the fans, Randle made another strong case for his inclusion in the mid-season classic.

Randle exploded for a season-high 44 points, one-point shy of his career-high, that pushed the New York Knicks to sixth spot in the Eastern Conference after clipping the Atlanta Hawks, 123-112, Monday night at The Garden.

He hit a career-high seven three-pointers, with the last one beating the shot clock with 3:18 left that gave the Knicks some breathing room, 112-107.

Then RJ Barrett put the game away with his three-pointer off a Randle assist.

Randle added nine rebounds and five assists in a spectacular performance, which Tom Thibodeau referred to as “a reflection of the work [Randle] is putting in.”

“He’s doing it all. But the most important thing is his impact on winning,” Thibodeau said. “Hopefully, it will be recognized.”

Randle has been the Knicks’ best player and leader this season, averaging 22.4 points, 11.1 rebounds, and 5.6 assists, all career-highs. Most importantly, he has led the Knicks to win 14 of their first 29 games in a season where they are expected to be one of the lottery teams.

Thibodeau said he wouldn’t call coaches around the league to lobby for Randle.

“His game speaks for itself. I know a lot of guys frown upon that,” Thibodeau said.

He explained that a lot of players are deserving for the seven spots in the All-Star reserves, but when it comes down to voting, and everything seems equal, the coaches would go to the next criteria, which he said is the impact on winning.

“I’m hopeful people will recognize what he’s doing for this team. And he will be recognized. He’s having a terrific season,” Thibodeau said.

Randle said he’s locked in, and making it to the All-Star game is one of his goals when he came to the Knicks via free agency last season.

Julius Randleâ€™s teammates had his back in his postgame after he went off pic.twitter.com/GpDMRhOVM6

Randle’s teammates have followed his lead.

Nerlens Noel continued to pick up the slack for the injured Mitchell Robinson. Despite nursing five fouls, Noel didn’t back down and anchored the Knicks’ defense. His back-to-back blocks in the third quarter punctuated a 7-0 Knicks run that enabled them to tie the game at 81-all.

Noel filled up the stats sheet with six points, four rebounds, two assists, two steals, and three-shot blocks. He tied Randle for the most +/- among all Knicks players with 17.

Elfrid Payton also was a catalyst in that run as he pumped in six of his 12 points while limiting Trae Young to just one field goal during that stretch.

Meanwhile, Barrett finished with 21 points on 8-for-13 shooting, including a perfect 3-for-3 from deep. It was an excellent bounce-back game for Barrett, who struggled in the Knicks’ last three games.

Rookie Immanuel Quickley contributed 16 points and five assists in 22 minutes off the bench.

Derrick Rose, who drew constant double teams in the fourth quarter, failed to score in double digits but still found ways to make an impact. He wound up with eight points, three boards, three assists, and two blocks.

The Knicks hope to make it four in a row when they visit the injury-ravaged Orlando Magic on Wednesday.

A win would pull them to .500 in their first 30 games and move Randle closer to his dreams.