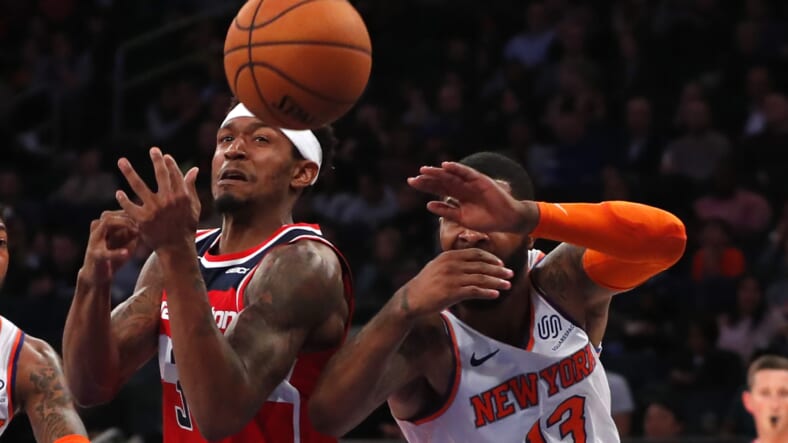 The Brooklyn Nets have an outside chance to land Bradley Beal, if not this offseason, in the foreseeable future.

Expect the Beal trade chatter to continue until next season after the Washington Wizards superstar left the door open for him to bolt out from D.C.

Beal, appearing on J.J. Redick’s podcast The Old Man and the Three, explained why he only signed a one plus one extension instead of the three or four-year deal.

“I want something built around me. I have that opportunity to do it here. I signed my deal and structured it to have some flexibility,” Beal said. “Because at the end of the day, I still want to win. The (Wizards) organization have to show me that we want to win. I want to see what John (Wall) is like [when he returns] as well.”

“You still want to be able to protect yourself and kinda be selfish. How can I create some type of flexibility for myself if we arenâ€™t winning, if I do choose to get out.”

Beal suprised the league when he signed a two-year, $72 million extension that will keep him in Washington until the summer of 2022 when he can exercise his player option to enter free agency.

If he declines his player option, he would be eligible for a lucrative five-year, $266 million deal or sign elsewhere for a four-year, $198 million contract.

“You still want to be able to protect yourself and kinda be selfish. How can I create some type of flexibility for myself if we arenâ€™t winning, if I do choose to get out.”

The Nets have reportedly discussed last summer on how to acquire Beal as the team’s third star after Kevin Durant and Kyrie Irving joined them last year.

At that time, Beal took the news as a sign of respect.

“It’s not the first time I’ve heard this kind of talk,” Beal told ESPN’s Jackie MacMullan. “It’s interesting. To me, I look at it as a sign of respect, that I’ve been doing good things and guys want to play with me. That’s an unbelievable feeling. When you hear that Kyrie and KD want you, sâ€”, that’s amazing.”

“At the same time, you don’t know how much there is to it, or how easy it would be to do. And I’ve put down roots in D.C. I’ve dedicated myself to this town, this community. I love it here, and it would feel great to know I could grind out winning here instead of jumping to another team. But I’d be naive to say that I don’t think about it when these stories come up.”

The Wizards are hoping that Wall’s comeback will ease up the load on Beal and help them get back into playoff contention in the East which has gotten stronger with a healthy Durant and Irving in Brooklyn.

Wall has only played 73 games since 2017-18 but looks fine in a recent workout against, ironically, the Nets that surfaced on social media.

Without Wall, Beal had to shoulder much of the load and despite a stellar campaign last season, he wasn’t named to any of the All-NBA teams. Beal averaged 30.5 points, 4.2 rebounds and 6.1 assists while shooting 45.5 percent from the field, 35.3 percent from beyond the arc and 84.2 percent from the free throw line.

He was the first player to average 30 points and six assists who wasn’t named to any All-NBA team.

The Nets as well as the other contenders will be closely monitoring Beal and the Wizards situation.

The pressure is building up in Washington.