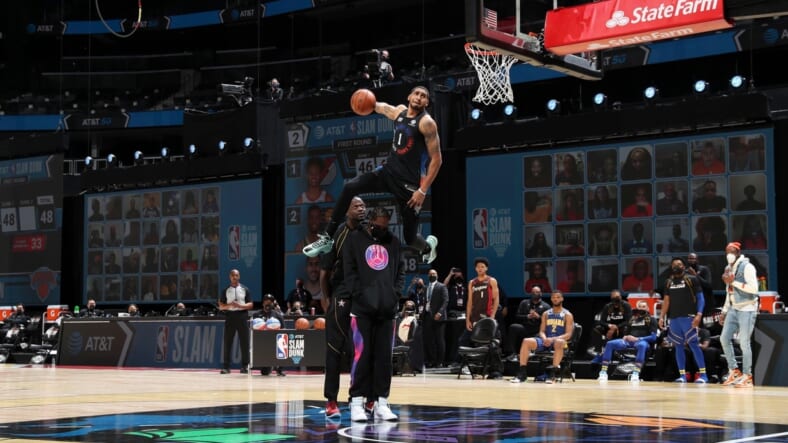 Obi Toppin jumps over Julius Randle and his father, Obadiah Toppin, for his second dunk during the NBA All-Star Slam Dunk contest in Atlanta. Getty Images

New York Knicksâ€™ lottery pick Obi Toppin came up short in the Slam Dunk Contest as his between-the-legs dunk from inside the free-throw line wasnâ€™t enough.

Though the 6-foot-3 Simons didnâ€™t actually kiss the rim on his final dunk, but his bounce and insane vertical leap gave him a 3-2 edge in the final round.

In the NBAâ€™s attempt to avoid the Dwyane Wade judging controversy last year, they changed the final round scoring from scorecards to â€œjudges choice.â€ The five judges, all past Slam Dunk champions, were made to choose who is their winner after seeing both dunks.

The Knicks rookie feels he has more to show and hopes to have another shot as early as next year.

“Me, given this opportunity to be on this stage with all these great players, it’s a dream come true. I didnâ€™t get the win, but all three of us had great dunks, and it was a fun experience,” Toppin said. “Hopefully, I can come back next year.”

Next yearâ€™s NBA All-Star Weekend will be held in Cleveland, where Toppin would have some sort of homecourt advantage, having played college ball in nearby Dayton, Ohio.

Toppin started the contest with a sick trick — a reverse between-the-legs bounce pass to himself.

Then he followed it up with a slam jumping over his teammate Julius Randle and his father Obadiah Toppin in the next round.

FINALS UP NEXT LETS GET IT OBI pic.twitter.com/X3FlR6MnJV

It was a double whammy for the Knicks as Randle also got booted out early in the Skills Challenge. The eventual winner Domantas Sabonis eliminated him right in the first round.

Randle played for 13 minutes as a reserve for Team Durant in the All-Star Game won by Team LeBron, 170-150. The first-time All-Star tallied four points, two rebounds, and two assists in his brief stint on the floor.

The Knicks will be back in action on Thursday. They will start their grueling second-half schedule against newly minted NBA All-Star MVP Giannis Antetokounmpo and the Milwaukee Bucks on the road.