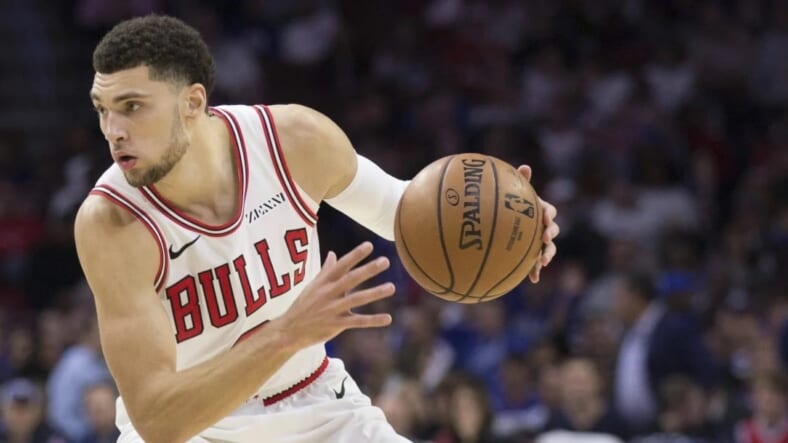 On Monday night, in Thibodeau’s return to the city that gave him his first break as head coach, LaVine showed the confidence his former coach has instilled in him.

LaVine scored 10 points in the final quarter, including the dagger three-pointer that sealed Chicago Bull’s 110-102 victory over his former coach and the New York Knicks.

The Knicks ran into a series of costly turnover, defensive breakdown, and wide-open miss in the final minute that cost Thibodeau a victory over his former team.

Thibodeau’s record against the Bulls since his unceremonious firing in 2015 is now 3-2 following the tough loss.

And LaVine, who Thibodeau unleashed with a 37-minute average playing time during his first coaching year in Minnesota, played a significant role.

An Immanuel Quickley long-range bomb with 3:32 left gave the Knicks their first lead, 95-94, since the first half.

Both teams went toe-to-toe until Coby White answered Alec Burk’s triple with his own to give the Bull’s a three-point cushion, 103-100, inside the final 42.4 seconds.

RJ Barrett missed a wide-open corner three off a timeout while LaVine iced the game at the line sending the Knicks (9-13) to their second straight loss.

The Knicks’ defense was able to contain Bulls forward Lauri Markkanen in the fourth quarter. But they had no answer to LaVine, who is reportedly on the Knicksâ€™ radar as the trade deadline approaches, according to Ian Begley of SNY.

Markkanen led the Bulls with 30 points, all coming through the first three quarters. LaVine added 21 points on 50 percent shooting from the field and beyond the arc (3-for-6).

Thibodeau lamented the Knicksâ€™ defensive breakdown that led to LaVine’s killer three-pointer down the stretch.

“The issue with LaVine and the pick and roll, and in some cases, with Markkanen, it’s gonna make you react to the ball particularly late. Like with Zach that we saw at the end when we had a breakdown that left him open,” Thibodeau said during his postgame interview. “He’s a great shooter, a phenomenal shooter. He’s a 50/90/40 guy.”

The Knicks were able to limit LaVine to just 11 points in the first three quarters.

But they couldn’t stop him when it mattered.

The Knicks battled back from a double-digit deficit early in the second half but looked spent in the second night of a back-to-back schedule.

The three-point shooting remained a concern for the Knicks, who ranked last in the league. They shot a paltry 6-for-29 from deep, and they were 2-for-15 in the first half. But thanks to their 17 free throws, they were only down by four, 59-55, at the break.

Randle played his usual all-around game (21 points, 11 rebounds, and 7 assists), but his last turnover on a spin move would make him lose sleep tonight.

Burks came off the bench with 18 points, while Quickley had another solid outing (16 points, 6 rebounds, and 7 assists in 31 minutes).

Nerlens Noel was also a massive part of the second unit that kept the Knicks in the game. He got the lion’s share of minutes at center with eight points, seven boards, and a game-high five shot blocks in 28 minutes. Mitchell Robinson, who picked up three quick fouls, played only 21 minutes and produced nine points and eight rebounds.

Barrett, who the Knicks and Thibodeau hope would develop into a go-to-wing like LaVine, struggled for 14 points on 7-of-17 shooting, including 0-for-3 from deep.

The Knicks will have a chance to avenge this loss in their rematch on Wednesday.