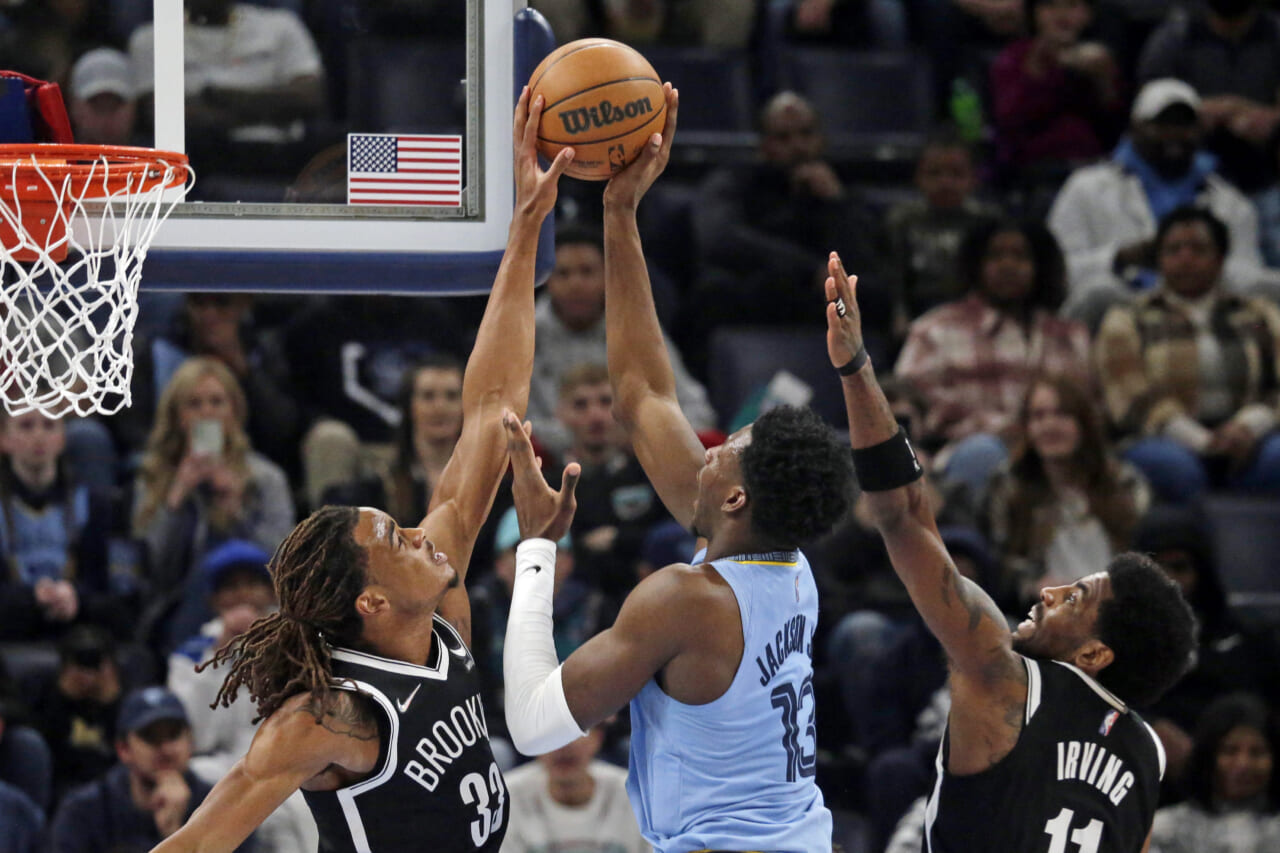 The Brooklyn Nets are reportedly unlikely to match a standard mid-level offer to Nic Claxton, who is set to become a restricted free agent.

Houston Chronicle’s Dan Feigen listed Claxton as one of the potential free-agent targets for the Rockets after trading away Christian Wood.

“The free-agent class at center is considered unusually deep with players that might be available to teams, including the Rockets, that are over the cap but can offer the full mid-level exception, starting at $10.5 million.

The Nets are considered unlikely to match a mid-level offer to Nic Claxton,” Feigen wrote.

Claxton, who threw away his dreadlocks for a cleaner, cropped hairdo, is determined to bounce back after an injury-riddled season. He was limited to 47 games but posted decent numbers (8.7 points and 5.6 rebounds). When healthy, he was a decent rim protector and a constant lob threat for the Nets. But his poor free shooting (58.1 percent) could be a turn-off to potential suitors.

In May, one Eastern Conference general manager told Heavy.com’s Sean Deveney that Claxton “is looking at something like three years, $35 million.” The Nets have Claxton’s Bird Rights, so they could match any offer and go over the cap. However, what could hold them back is the staggering cost of bringing back the roster that flamed out in the first round.

Nets’ owner Joe Tsai paid $266 million in salary and luxury tax this past season, second behind NBA champion Golden State Warriors. But with Alibaba, Tsai’s primary source of income, bouncing back in the stocks market, there is hope that the Nets ownership would likely keep footing the costly bill of retaining the core that is expected to compete for the championship when all are healthy. That includes keeping Claxton, one of the bright spots in the Nets’ first-round sweep at the hands of eventual Eastern Conference champion Boston Celtics.

The Nets are expected to tender a one-year qualifying offer to Claxton ($2.3 million) to make him a restricted free agent on June 29. 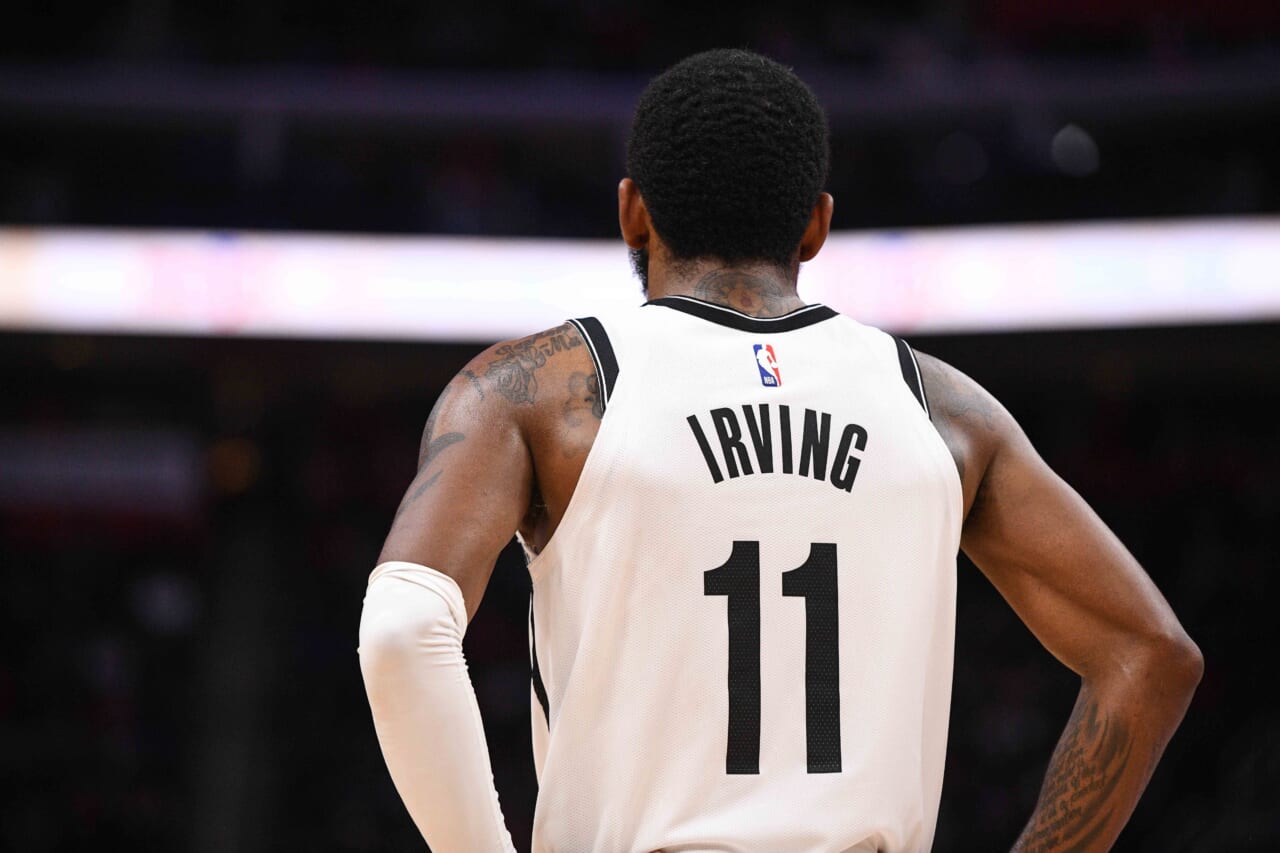 After the Brooklyn Nets‘ turbulent season ended in a first-round sweep at the hands of his former team, the Boston Celtics, Kyrie Irving was so sure about his future.

It was not the case when Irving was asked to stay away from the team after he refused to take the COVID-19 vaccine.

The Nets came into the season as the title favorites. But Irving nor the Nets did not expect the curveball that torpedoed their best shot to win the elusive NBA crown finally.

“When we got to the training camp in San Diego, I wasn’t expecting a mandate to be brought down that it was not gonna allow me to play at all,” Irving said on Boardroom’s The ETCs.

Irving wondered about his future with his team and his career as days turned into weeks, weeks into months, waiting for the New York City to lift the vaccine mandate that kept him from playing in their home games and at Madison Square Garden.

The Nets were able to survive the early months of the season without Irving until a knee injury to Kevin Durant and a wave of COVID-19 infections caused the team to fall from the top of the Eastern Conference. It was the opening Irving needed to get back on the court.

The Nets eventually relented and took Irving back as a part-time player for their away games.

“But I never felt like myself throughout the season because I’m usually sustaining a level of growth instead of trying to catch up with everybody that’s been playing for four to five months. They’ve been at it since October. I was at it, maybe September or October. I was healing from my ankle injury and still dealing with that,” Irving said.

Irving tried his best to catch up since his return in January and peaked in March when he scored 50, 60, and 43 points in three of a four-game stretch in a span of two weeks. But despite returning to the lineup, the damage has been done. James Harden eventually asked out, in part, due to Irving’s messy situation.

“I had the opportunity to play away games still, but there was no plan in place or vision of how it’s going to work for our team. I think that really impacted not just me but a lot of people. So I just had to sit on the hot seat for a little bit and handle it,” Irving said.

It was a little too late when newly-elected New York City Mayor Eric Adams lifted the mandate for Irving and other athletes. With Ben Simmons, the headliner in their Harden trade haul, unavailable, the Nets folded up quickly with little chemistry in the playoffs.

The good news is they will have Irving to run it back with Durant and, hopefully, a healthy Simmons and Joe Harris. But it comes with a heavy price tag for another championship-or-bust season that keeps on digging Joe Tsai’s pocket, which also lost between $50 million and $100 million combined in the 2021-22 season.

Irving is expected to decline his $36.5 million player option next season and sign an extension for up to four years, $183.6 million or for five years, $247.6 million.

.@KyrieIrving on not being able to play home games throughout most of the season:

As Irving wondered about his future early in the season, the Nets were left wondering at the end of another lost season what could have been if only their superstar guard adhered to the city mandate. 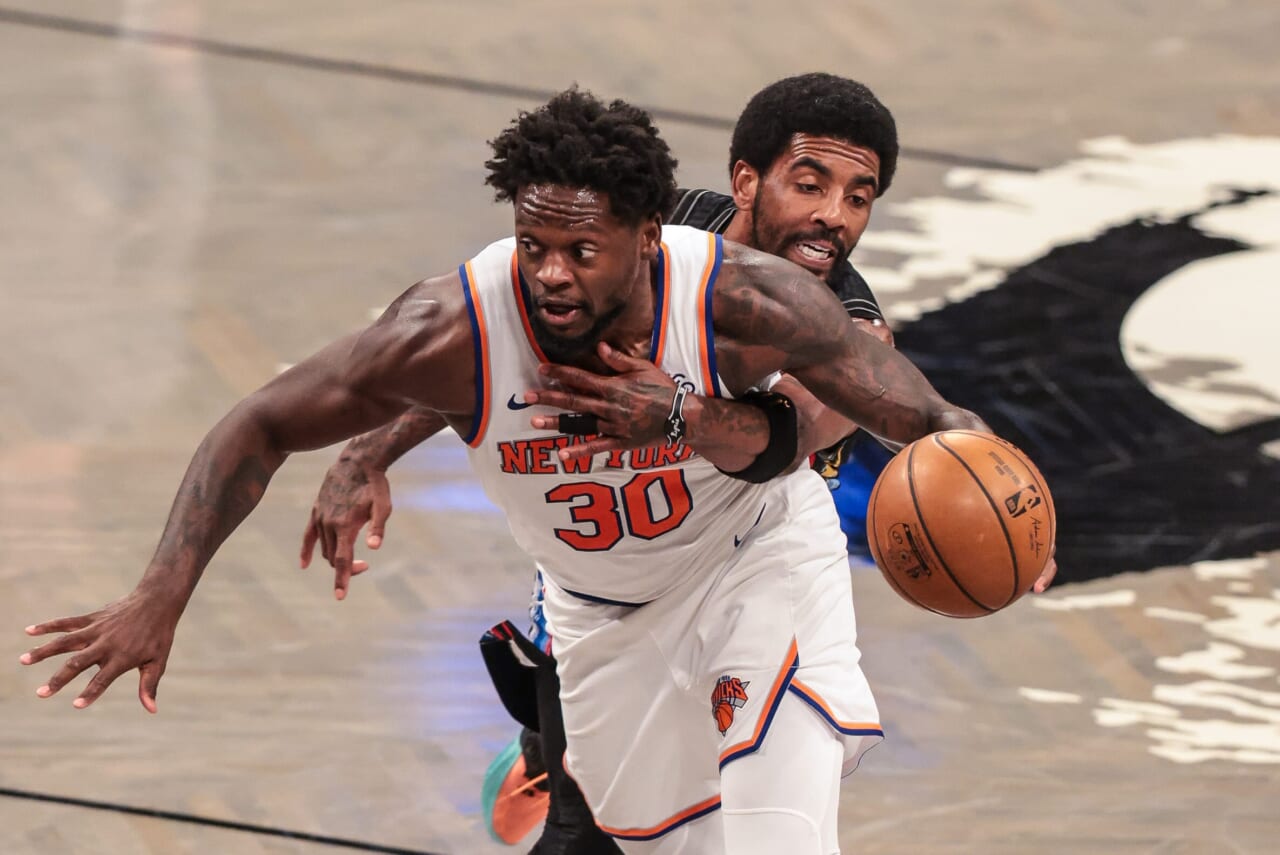 The New York Knicks may have missed the NBA playoffs, but James Dolan still raked in more money than Joe Tsai did with his star-studded luxury tax team Brooklyn Nets.

According to a New York Post report, the Knicks have brought in about $900,000 more than the Nets’ average gate receipts per game. A team headlined by struggling Julius Randle and ascending RJ Barrett at Madison Square Garden was the hotter ticket in town, drawing 18,621 fans per game, which ranked eighth in league attendance. On the other hand, the Kevin Durant-Kyrie Irving star power drew 17,354 spectators per game at Barclays Center, good for 13th in league attendance.

Those numbers translated to $3 million per game for the Knicks, a 9 percent jump from the pre-pandemic in the 2018-19 season. But while the Nets lagged with just $2.1 million per game, it was still much better than the pre-Durant-Irving era.

Before Durant and Irving chose Brooklyn over New York’s beloved Knicks, the Nets were only averaging $1 million per game from about 15,000 tickets sold, after giveaways, in the 2018-19 season. That 26-percent improvement represents the biggest bump in the league, which they share with the resurgent Phoenix Suns.

But still, Tsai, who bought the Nets franchise for a record $2.35 billion and the Barclays Center for $1 billion in 2019, is losing money with the second-highest payroll in the league.

Tsai bankrolled the Durant-Irving-Harden and later with unplayable Ben Simmons for a staggering $172,836,362 with an estimated tax bill of $97,731,568 this season. In contrast, despite his Knicks front office going on a spending spree in the last offseason, Dolan had the third-lowest payroll in the league, spending just $120,376,240, avoiding the luxury tax bill.

Now, Tsai and his GM Sean Marks, have a $247.6 million decision, among other things, to make this summer to retain the uber-talented but mercurial Irving.

Robinson is eligible for a four-year extension maximum of $58 million until June 30 while Barrett can be extended this summer up to five years, $181 million.