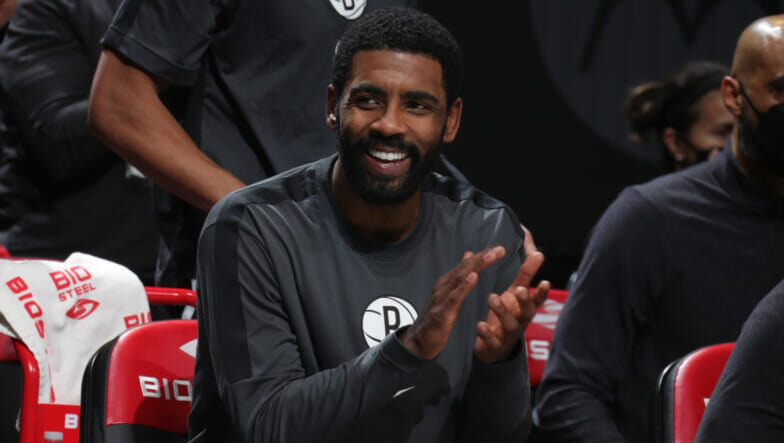 BROOKLYN, NY - JANUARY 5: Kyrie Irving #11 of the Brooklyn Nets smiles during the game against the Utah Jazz on January 5, 2021, at Barclays Center in Brooklyn, New York. Nathaniel S. Butler/NBAE via Getty Images)

Irving and his family met with Nets owner Joe Tsai and his wife Clara on Thursday to sort out the antisemitic scandal that cost him at least a five-game suspension without pay and his shoe deal with Nike.

“We spent quality time to understand each other, and it’s clear to me that Kyrie does not have any beliefs of hate towards Jewish people or any group.

Tsai added that “Irving together with the NBA and NBPA, are working constructively toward a process of forgiveness, healing and education.”

The meeting with Tsai was one of the six requirements, the Nets asked from Irving before he can get clearance to play again.

Like Tsai, Silver also came to the same conclusion after his earlier meeting with Irving.

“I personally, based on what he said directly to me, have no doubt that he’s not antisemitic,” Silver said. “But I think there’s a process that he’s going to need now to go through.”

Irving has already done two of the six requirements — issue a public apology and meet with Tsai — with the third one, a $500,000 donation to anti-hate causes initially rebuffed by the Anti-Defamation League.

But ADL CEO Jonathan Greenblatt was encouraged by the new development.

“I’m very encouraged by the progress that’s been made. Thanks to all involved (Irving, NBA, Nets, NBPA and Tsai) for their openness and willingness to work towards a positive outcome. The Black and Jewish communities have so much in common, it’s critical that we come together and heal so that we can stop the spread of hate. All of us at ADL are ready to engage towards a better future for all

But despite Irving’s progress, he is not yet reportedly joining the team on their West Coast road trip that ends Thursday next week. Irving could play as soon as the Los Angeles Lakers game on Saturday, but he still has to attend sensitivity and antisemitic training and meet with ADL and Jewish leaders to complete the remedial list.

Their Nov. 20 home game against the Memphis Grizzlies is a more realistic target.

The NBPA, where Irving is an executive vice president, has reportedly sent emails to players raising optimism for a resolution “very soon”, according to ESPN.