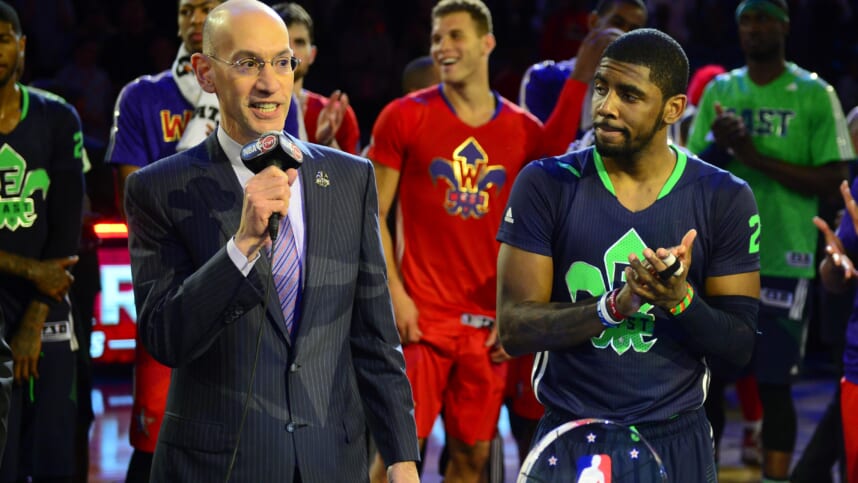 The Athletic’s Shams Charania described the meeting as a “productive and understanding visit.”

Irving was suspended last Thursday for at least five games without pay after repeatedly refusing to apologize for posting a link to a film filled with antisemitic tropes.

The penalty came after Silver called Irving’s decision ‘reckless’ and vowed to meet with the controversial Nets star, which he did. He added he was “disappointed that he has not offered an unqualified apology and more specifically denounced the vile and harmful content contained in the film he chose to publicize.”

The post has since been taken down, and Irving issued a public apology via Instagram shortly after the Nets announced his suspension.

But the backlash continued with Nike suspending their deal and canceling the launch of his eighth signature shoe. His former Cleveland Cavaliers teammate LeBron James also aired his displeasure, saying he doesn’t condone what Irving did.

The Nets laid out a six-point action list for Irving before he could return to the court, which included sensitivity and antisemitic training and a face-to-face meeting with the Anti-Defamation League, Jewish leaders, and finally with Nets owner Joe Tsai.

Boston Celtics star Jaylen Brown said he expects the NBPA to appeal Irving’s case as players have expressed discomfort with the long list of requirements.

Irving’s productive meeting with Silver can now pave the way for the suspended star and the Nets to move forward.

But on top of the stringent requirements, Irving also has to mend his relationship with the organization and in their locker room, according to Charania.

The Nets are 2-1 since Irving was suspended.

Second-year guard Cam Thomas stepped up in his absence, and Irving’s closest teammate Kevin Durant attributed their improved play to “a little bit of solace” they found in locking back in and focusing solely on the game.

The Nets will be without Irving for the fourth straight game when they face across-the-borough rival New York Knicks on Wednesday.