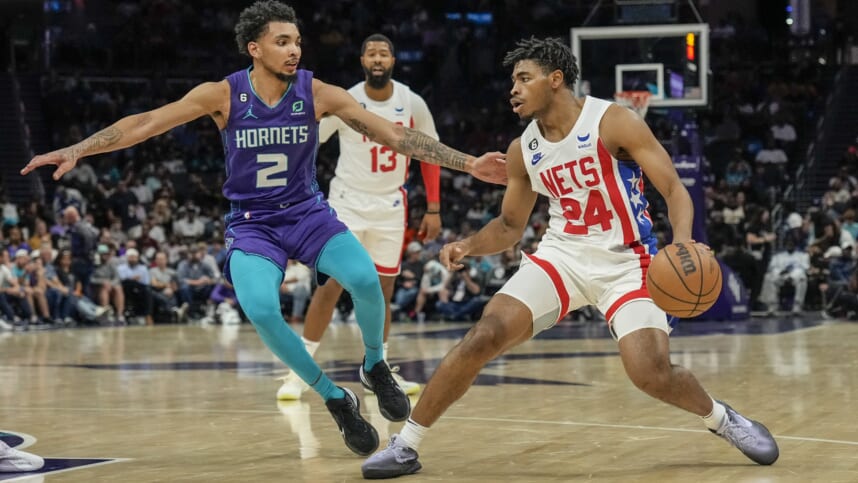 Trying to move on from a controversy-filled and energy-draining week, the Brooklyn Nets have found comfort on the hard court.

The Nets are now 2-0 since they have suspended their controversial star Kyrie Irving.

“We just felt some pride. We wanted to come out here and get some W’s. it’s good for our character just good for the energy of the team to fight through adversity and Cam came out. Just poised for a second-year player, he was able to control the game at the point.”

Thomas added a season-high 21 points and four assists. He had 17 and six in their massive 128-86 win in Washington the night before. More importantly, the sophomore guard has only one turnover in 61 minutes of play over the last two games.

Durant sparked a 12-0 run midway through the fourth quarter as the Nets wiped out a Hornets’ 10-point lead. Thomas’ two free throws punctuated that run to put the Nets ahead, 89-87, with 2:40 left.

Then they alternately kept the Hornets at bay with timely hits to complete a 21-7 closing run.

“It means a lot. It was a rough first two, three weeks of the season for me. For coach JV (Vaughn) to have a trust in me to close the game out and play me a good amount of minutes these last two games I can’t thank him enough for that and also my teammates too, KD of course, for trusting me to have the ball down the stretch.”

Thomas had six points and two assists in the fourth quarter. He tied Durant for the best plus-minus in the team with plus-13. Vaugh was effusive in his praise for the second-year guard.

“It’s awesome to have Cam (Thomas) finish the game. Its lessons of life are amazing. What a difference a week could look like. He was ready.”

Nets’s defense pick up under Vaugn

The Nets have improved to 2-1 since firing Steve Nash.

Under interim coach Jacque Vaughn, the Nets’ defense has picked up. They held the Hornets to 37.2 percent shooting. Their last two opponents haven’t scored more than 94 as their erstwhile league-worst defensive rating has shot up to 113.6, currently 22nd in the NBA.

He described the Nets’ closing run as gritty and grimy, two words that were hardly associated with the team in the past.

This close call against the Hornets is much more meaningful than Friday night’s big win against the Wizards.

“Yeah, without a doubt it is. The thing we’re going to hold on to is back-to-back, on the road, odds are against you. We talked about no excuses and we didn’t find an excuse. We found a solution.

So that was the goal of the entire group. To see the bench cheering for each other, totally into the game. Without a doubt, this win is different. It means more than the other night.”

The Nets will be looking to continue their winning streak in Dallas Monday night in a marquee matchup between Durant and MVP favorite Luka Doncic.

The Nets would need Thomas to keep rolling.