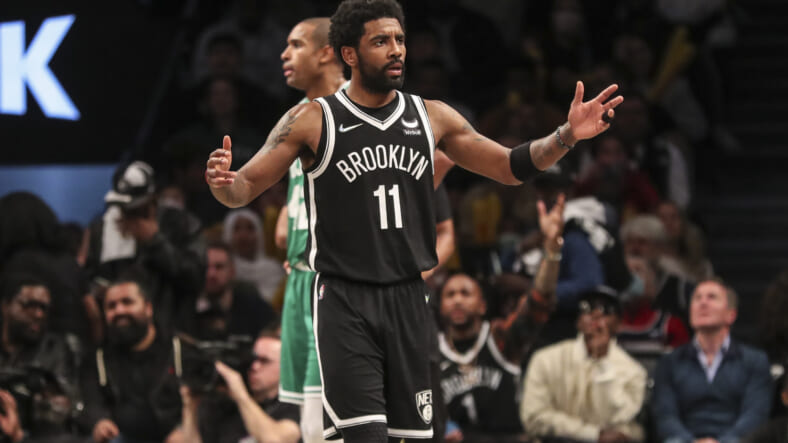 On Thursday, his tweet promoting the film adaptation of the controversial book Hebrews to Negroes, put him again in the middle of a storm — the last thing that the struggling Nets need right now.

“I’m disappointed that Kyrie [Irving] appears to support a film based on a book full of anti-semitic disinformation. I want to sit down and make sure he understands this is hurtful to all of us, and as a man of faith, it is wrong to promote hate based on race, ethnicity or religion.

This is bigger than basketball.”

According to the film description on Amazon Prime, the movie “uncovers the true identity of the Children of Israel by proving the true ethnicity of Abraham, Ishmael, Isaac, Jacob, the Sons of Ham, Shem & Japheth.”

Per Barnes and Nobles, the book on which the film was based “touches on subjects too controversial for most authors to reveal to the people. The book exposes the truths that have been hidden by the powers that be in America. Since the European and Arab slave traders stepped foot into Africa, blacks have been told lies about their heritage.”

According to Rolling Stone, “both suggest Hebrews to Negroes espouse ideas in line with more extreme factions of the Black Hebrew Israelites, which have a long history of misogyny, homophobia, xenophobia, Islamophobia, and especially antisemitism.”

Tsai planned to sit down with Irving to tackle the matter.

“The Brooklyn Nets strongly condemn and have no tolerance for the promotion of any form of hate speech. We believe that in these situations, our first action must be open, honest dialogue. We thank those, including the ADL (Anti-Defamation League), who have been supportive during this time.”

The Nets will host the Indiana Pacers Saturday night at the Barclays Center.