Yuta Watanabe becomes the first Asian player to sign with the Nets since Taiwanese-born Canadian Joe Tsai bought the team in 2019. 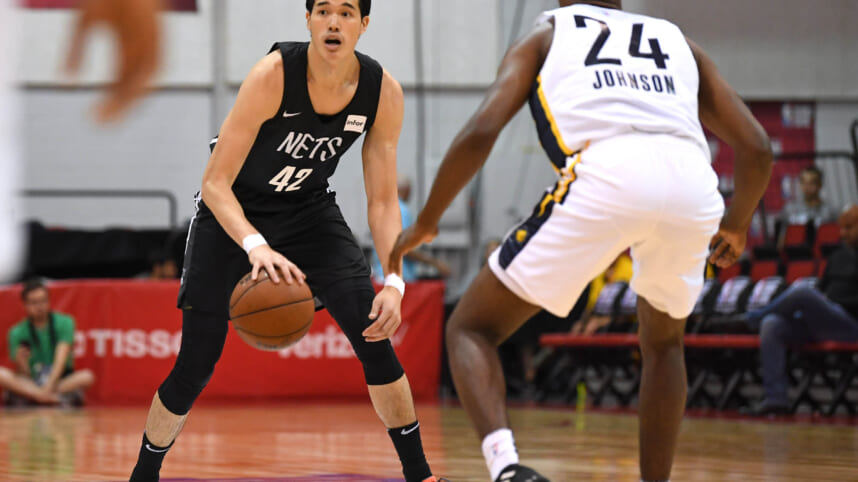 Yuta Watanabe returns to the Brooklyn Nets for the second time in his career and vows to do his best to secure a roster spot this time.

Watanabe first suited for the Nets in the 2018 NBA Summer League after going undrafted. Now, he’s returning on a one-year non-guaranteed deal but with a real shot at earning a roster spot.

“Thank you for all the congratulatory comments, but it’s still a non-guaranteed [training camp] contract]. I’ll do my best again with a precipice spirit.”

Watanabe becomes the first Asian player to sign with the Nets since Taiwanese-born Canadian Joe Tsai bought the team in 2019.

The 6-foot-8 Watanabe has been dubbed “The Chosen One” in Japan. He was the first Japanese-born player to earn an NCAA Division I basketball scholarship playing for George Washington. But despite making his mark in prep (National Prep School Invitational All-Tournament Team) and college basketball (Atlantic 10 Defensive Player of the Year), Watanabe went undrafted in 2018.

After his summer league stint with the Nets, he hustled his way to a two-way contract with the Memphis Grizzlies and a standard deal with the Toronto Raptors, becoming a fan-favorite for his hard-nosed defense and gutsy plays.

In 38 games, including four starts, with the Raptors last season, Watanabe averaged 4.3 points and 2.4 rebounds in 11.7 minutes.

After the Nets got swept in the first round, GM Sean Marks had been trying to shore up the Nets perimeter defense and surrounding Kevin Durant and Kyrie Irving with more shooting.

This vision helped Marks to convince Durant to rescind his trade request and run it back.

Watanabe, a 35-percent career three-point shooter, fits the bill alongside Royce O’Neale, whom the Nets acquired from the Utah Jazz in exchange for a first-round pick.

Watanabe joins Edmond Sumner with a non-guaranteed deal and will have to compete for a roster spot in the training camp next month. The Nets now have 14 players on a standard contract and one two-way player in Alondes Williams.

They still have five training camp roster spots open — all of their three Exhibit 10 spots, one more two-way deal and their final standard contract.

The Nets are reportedly leaning toward using their final standard contract spot in bringing veteran forward Markieff Morris. But they have a competition in the Philadelphia 76ers, who have reportedly explored bringing Morris home.

This could mean a slimmer chance for David Duke, Jr. to earn a standard deal with the Nets. Duke, Jr., who played solid in the Nets’ Summer League campaign, might have to settle for another two-way contract after initially turning it down.