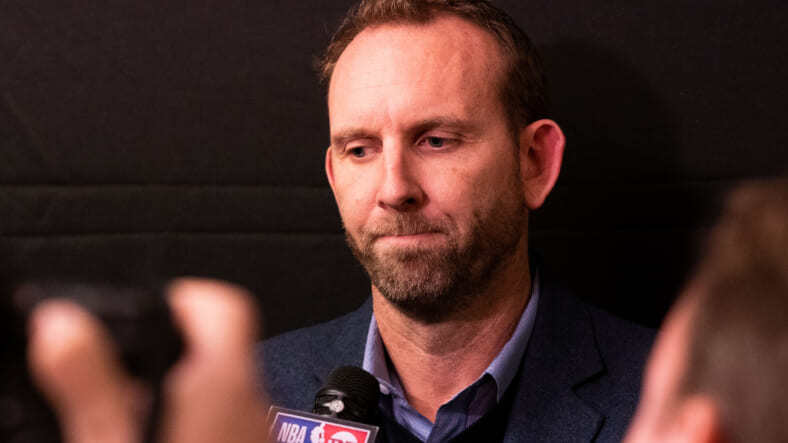 In 2019, Brooklyn Nets GM Sean Marks was the toast of the NBA after scoring a sweet sweep in the free agency. He envisioned multiple championships with superstars Kevin Durant and Kyrie Irving as the franchise cornerstones.

Three summers later, Marks is getting roasted after publicly admonishing Irving and a contract extension impasse that had a hand in Durant’s trade request. His dream dynasty has become a nightmare with a still crown-less Nets franchise in shambles.

In a crucial meeting with Nets owner Joe Tsai reportedly held in London over the weekend, Durant applied more heat on Marks’ already hot seat. The soon-to-be-34-year-old superstar gave Tsai an ultimatum: trade him or fire Marks and his handpicked coach Steve Nash.

Marks wanted to regain the culture and power he sold to Durant and Irving. The superstar duo intends to retain control over the franchise.

Marks has no track record of championships, but he was able to steer the franchise out of a hopeless situation in which there were no clear-cut stars and lottery picks. He painstakingly built a culture of accountability, turned other teams’ trash into gold, and mined diamonds in the rough from the draft. Before Durant and Irving’s arrival, their focus was on player development under Kenny Atkinson, leading to an inspiring first-round playoff exit.

The same culture that reportedly attracted Durant and Irving was thrown out of the window in favor of player empowerment. Marks bent to his superstars’ will, costing Atkinson his job.

Nash was handpicked to become a voice of reason in the locker room filled with veterans and his prior relationship with Durant during their time together in Golden State.

But still, it wasn’t enough.

Marks traded their future for James Harden to form a Big 3 that became an all-time flop.

On the other hand, Durant and Irving have a proven track record. They both won NBA championships with their past teams, but there’s a caveat. They were not the acknowledged alphas in those title teams — roles that belonged to Stephen Curry and LeBron James — that led them to forge a partnership in Brooklyn.

But in two seasons together, not counting the first year when Durant recuperated from Achilles heel injury, their partnership in Brooklyn has only produced one playoff series win.

They entered last season with a bang as the title favorites and went out with a whimper on an embarrassing first-round sweep.

When Marks began the offseason with his sharp public remarks, a veiled threat at Irving to fully commit, the Nets were reportedly ready to lose their superstars.

Three summers ago, Marks netted the most coveted free agent superstars. But as it turned out, he realized they were not the right superstars to lead them to where they wanted to go.

But with no team willing to meet the Nets’ sky-high asking price for Durant, Tsai has been pushed to a corner.

He’s left with a crucial decision to make that will shape the Nets franchise’s future.

Will he pick Durant or Marks and Nash?