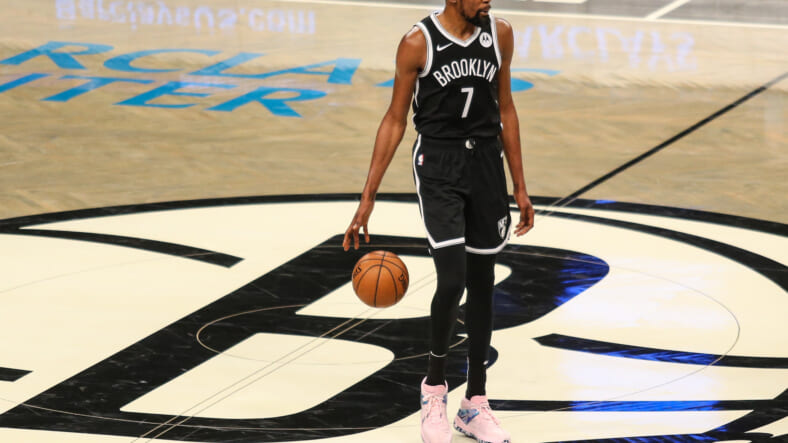 On the third anniversary of his arrival in Brooklyn, Kevin Durant dropped the bombshell that he wanted out.

Durant requested for a trade Thursday, a few hours before the NBA free agency begins, according to multiple reports.

It was a stunning but inevitable development after Kyrie Irving opted into his $37 million player option following an acrimonious negotiation for a contract extension.

Durant has the Miami Heat and Phoenix Suns on top of his wish list, but he has no leverage owing to his four-year extension that is set to kick in next season. The Nets have the prerogative to seek the best available deal for their franchise player.

The 33-year-old superstar will leave Brooklyn with only one playoff win to show. The Nets got swept in the first round last season, with Durant playing his worst playoff series.

With Durant leaving, Irving will likely be traded next as an expiring deal.

It is a sad day in Brooklyn as the duo arrived exactly three years ago with championship expectations that haven’t been met.

Over the last three years. Durant and Irving played together for only 58 out of 247 games.

Durant sat out the first season of his original three-year deal with the Nets recovering from an Achilles heel injury. He returned the following season and came a foot short of leading the Nets to the Eastern Conference Finals.

This past season had been the most tumultuous, which began when Irving refused to take the COVID-19 vaccine. It threw a monkey wrench to the Nets’ championship aspirations as James Harden subsequently demanded a trade midseason, breaking up their Big 3.

Of the two teams on top of Durant’s wish list, the Suns could have the more attractive package with a combination of restricted free agent center Deandre Ayton, Mikal Bridges or Cam Johnson plus multiple first-round picks and pick swaps.

The Heat might have to settle with a package headlined by Tyler Herro and Duncan Robinson as the Nets are not allowed to acquire a player like Bam Adebayo from the Heat because of the Designated Rookie Extension rule, according to ESPN front office insider Bobby Marks.

Based on the rule, the Nets cannot have two players acquired via a trade signed to that type of extension. The Nets already have that in Ben Simmons.