Durant hands off from Irving-Nets drama: Whatever happens, friendship will still be there 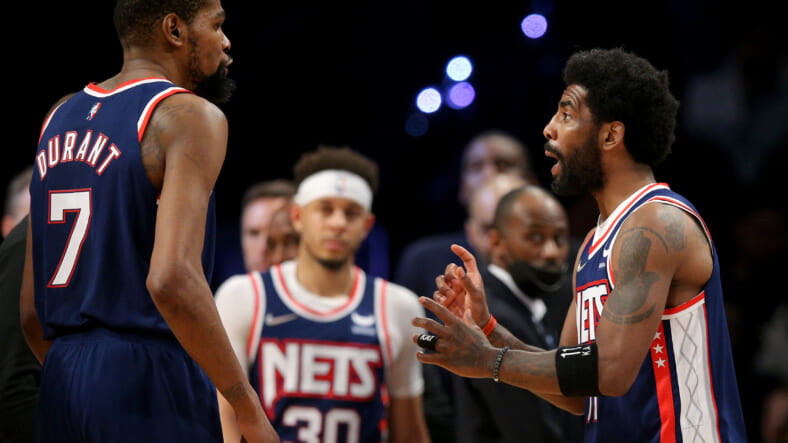 Apr 25, 2022; Brooklyn, New York, USA; Brooklyn Nets guard Kyrie Irving (11) talks to forward Kevin Durant (7) during the fourth quarter of game four of the first round of the 2022 NBA playoffs against the Boston Celtics at Barclays Center. The Celtics defeated the Nets 116-112 to win the best of seven series 4-0. Mandatory Credit: Brad Penner-USA TODAY Sports

Kevin Durant is keenly watching the Kyrie Irving–Brooklyn Nets drama from a distance.

Durant is in the middle of the crossfire between Irving and the Nets as the negotiation for a new contract gets reportedly acrimonious.

While Durant is supposedly wielding so much power over the Nets organization as their franchise player, he is distancing himself from the drama that may dramatically shift the team’s trajectory.

“There’s no involvement at all. I mean, I can’t be involved with this,” Durant said Friday on his ETC podcast. “This is this man’s livelihood. This is much bigger than me.”

“Being a free agent, it’s one of the most important times in your career. That can’t be swayed by anybody else. I just do me and wait for the time,” Durant added. “Whatever happens, [the] friendship will still be there.”

Irving has until Wednesday to pick up his $36 million player option and could reportedly proceed to exit the Nets via sign-and-trade.

On the Nets, Kevin Durant and Kyrie Irving: pic.twitter.com/xphBIP8LB3

None of them have the cap space to sign Irving outright. And not all of them are interested in acquiring the enigmatic point guard, who was only available for 103 regular-season games throughout his first three years in Brooklyn. It could be one of the reasons for the Nets’ holdout in this high-stakes leverage game where it might cost them Irving and potentially Durant.

If Irving leaves, there’s no guarantee that Durant will finish the four-year extension he recently signed with the Nets. After all, Irving’s pull gravitated Durant to the Nets instead of their across-the-borough rival New York Knicks.

Logan Murdock of The Ringer doubled down on Durant distancing himself from the situation. Murdock posited in the Mismatch podcast, also last Friday, that Durant is not recruiting free agents unlike before.

“I don’t think Kevin is confident in the front office right now,” Murdock said. “I don’t know if he’s at the stage of leaving, but there’s a big uneasiness from not only from the Kyrie side but the KD side as well.”

“His biggest beef is that he feels that the front office didn’t grow to understand Kyrie, whatever that means. I would push back on that when a guy leaves for two weeks at a time … Kyrie earns the lion’s share of the blame. But I think KD believes that ‘hey, you guys didn’t understand this guy. You didn’t try to figure out where he was coming from.'”

Another potential reason that Durant may leave the Nets is the firing of Adam Harrington, one of Steve Nash’s assistant coaches and the director of player development. Harrington was Oklahoma City Thunder’s former shooting coach who helped Durant develop his Dirk Nowitzki-one-legged fadeaway shot.

“[Harrington’s departure] had a big ripple effect on how Kevin feels about this right now,” Murdock said. “He’s still in this figure-it-out mode, but there is some fire to that smoke that he’s kind of re-evaluating where he stands with this.”

The Nets are at an inflection point. They are trying to wrest back control from their superstars — reviving the culture that once attracted Irving and Durant.