The New York Knicks fell to the Phoenix Suns on Friday evening by a score of 118–97. The starting team completely disappeared as Julius Randle contributed just nine points, four-assist, and six rebounds. Having played in 32 minutes, Tom Thibodeau needed his best player to step up and provide a sufficient performance, but he was unable to get going and was pulled early in the game.

The highest scorer of the game for the Knicks was point guard Kemba Walker, who contributed 17 points over 23 minutes. While Walker was their best offensive player, his defense was lackluster, as was the entire starting unit. Not a single starter earned a positive +/-, allowing Phoenix to post an absurd stat line.

One of the keys for the Knicks was to limit Devin Booker, the Suns’ top scorer. Over 35 minutes, Booker recorded 32 points, hitting 14-of-27 shots from the field and picking up three assists. Chris Paul added 14 points and 10 assists, in line with his season average. Every single starter from Phoenix scored double digit points, which allowed Thibodeau to give his youngsters some added minutes in the loss.

For the first time this season, rookies Quentin Grimes and Miles McBride earned some playing time. Grimes featured in 16 minutes, picking up three points and four rebounds. McBride posted two points over four minutes, while second-year guard Immanuel Quickley added 16 points over 20 minutes, hitting 50% of the shots from deep. Quickley has been on a tear recently, justifying starter-level minutes.

The Knicks are trending down as of late, especially with the starting team struggling to produce on a regular basis. Randle had posted 20 or more points over his last two games, but this was his first outing of the season, where he earned single-digit points.

The team needs more for their All-Star power forward if they want to be a top team, and this disappearing act cannot be a frequent occurrence. Thibodeau will undoubtedly have a few critical words for his squad after an embarrassing performance against Phoenix, and the schedule doesn’t get any easier as the Knicks prepare to take on the Atlanta Hawks, Brooklyn Nets, and Chicago Bulls consecutively in the coming days.

The New York Knicks are preparing to take on the red hot Phoenix Suns on Friday evening, who have won 14 games straight, with recent wins over the Cleveland Cavaliers and San Antonio Spurs. While Phoenix has enjoyed somewhat of a light schedule up to this point, the Knicks have an opportunity to end their impressive streak.

However, it is going to take every player at the top of their game to dismantle the Suns, who’ve been lethal offensively this season.

Three keys for the Knicks to take down Suns:

Limiting Chris Paul is easier said than done, as he’s averaging 14.1 points, 10.4 assists, and 2.1 steals per game. He is still an elite point guard and is incredibly intelligent with a ball in his hands. When he’s not scoring, he’s facilitating, so finding ways to keep him at bay is a priority for New York.

“It’s just incredible,” Knicks coach Tom Thibodeau said this week when asked about Paul. “I think he’s always been a great player. His career speaks for itself. He went through a stretch where he had injuries, but the way he’s taking care of his body and he’s sort of just navigated that and he’s been healthy, I think you see what his leadership has done for that team. He’s brought the best out of them.”

I would love to see Immanuel Quickley have a chance to guard Paul with his aggressive press style, they should put more full-court pressure on the star PG.

2.) Devin Booker can’t be given space to shoot

Phoenix’s top scorer this season is Devin Booker, who is averaging 23.1 points, 5.5 rebounds, and 4.8 assists per game. Booker has once again elevated his play, facilitating efficiently but also scoring at an incredibly high clip. He’s connecting on nearly 40% of his three-point attempts and 45.1% from the field.

The Knicks have had trouble guarding the perimeter this season at times, and if they give Booker too much space and open looks at the basket, he will make them pay. Having aggressive perimeter defense is essential to limiting Devin coming off a 35-point performance against Cleveland.

3.) Knicks’ starters need to step up

The Knicks’ starting unit can’t have another deficient game, not against Phoenix. The Suns currently have the third-best defensive rating in basketball, as the Knicks sit at 16th, a big increase from just a week ago.

If the starters are unable to contribute significantly, they will have to once again rely on their second team, who don’t have the capacity to match the offensive production of Phoenix. Luckily for New York, Julius Randle is coming off two consecutive games, posting 20+ points, and he’s finally finding his groove.

The team needs more from starting point guard Kemba Walker, who has scored single-digit points in his last four contests with a minimum of 18 minutes. For New York to be a competitor in this matchup, they need Walker to be an offensive threat, knocking down his 3-PT attempts consistently.

Chris Paul’s reported plan to opt-out of his current pact to seek a new multi-year deal in the $100 million range has been met with some pushback.

Chris Mannix of Sports Illustrated reported on Thursday that some NBA executives believe the more realistic figure is way below that range.

“The Chris Paul player option — $44.2 million — will be interesting to watch. Execs I’ve talked to peg CP in the three-year, $60 million-ish range on a new deal. Does Paul go for the most guaranteed money? Or does he pick up the option and bet he has another All-Star season?,” Mannix wrote.

If this is true, then there’s no reason why the New York Knicks will not join the Paul’s sweepstakes this summer.

But everything is fluid at this point especially after the 36-year old Paul‘s Game 2 performance added another layer to his legendary ‘Point God’ status.

Chris Paul in 2014, who was the first player to do it since…

Unless the Phoenix Suns flame out, there’s a great chance Paul would stay in the desert.

“Opt-in and extend for another two seasons. That would be the best direction for him. He holds a ton of leverage over that organization,” Marks replied to Mannix’s report.

Paul has been perpetually linked to the Knicks ever since his former agent Leon Rose became the team’s president. It was widely reported that New York was one of his preferred destinations when Oklahoma City was shopping him in the offseason. But in the end, the Thunder opted for the Suns’ more desirable package.

Paul’s friend and former teammate Matt Barnes also intimated that the Suns’ guard would have preferred the full experience in New York.

But even with the Knicks’ surprising rise this season and their fans getting back to the Madison Square Garden, Marks believe the Suns have the upper hand if Paul opts out.

“He’s made $400M in his career. It’s all about the quality of life and winning. Phoenix has a clear advantage on both,” Marks added.

As this season and playoffs revealed, the Suns have the better roster makeup than the Knicks at this point. So the Suns would be too good to pass up for Paul especially if they overpay him.

But the Knicks’ roughly $50 million cap space can be Rose’s wildcard to convince Paul to come to New York.

Winning in New York would be more special than with a small market team.

If Paul agrees to a $20 million per, that will leave the Knicks more than enough to spend on another superstar to form their version of Big 3 with Julius Randle and a solid supporting cast led by RJ Barrett.

It will be an interesting summer if Paul opts out. 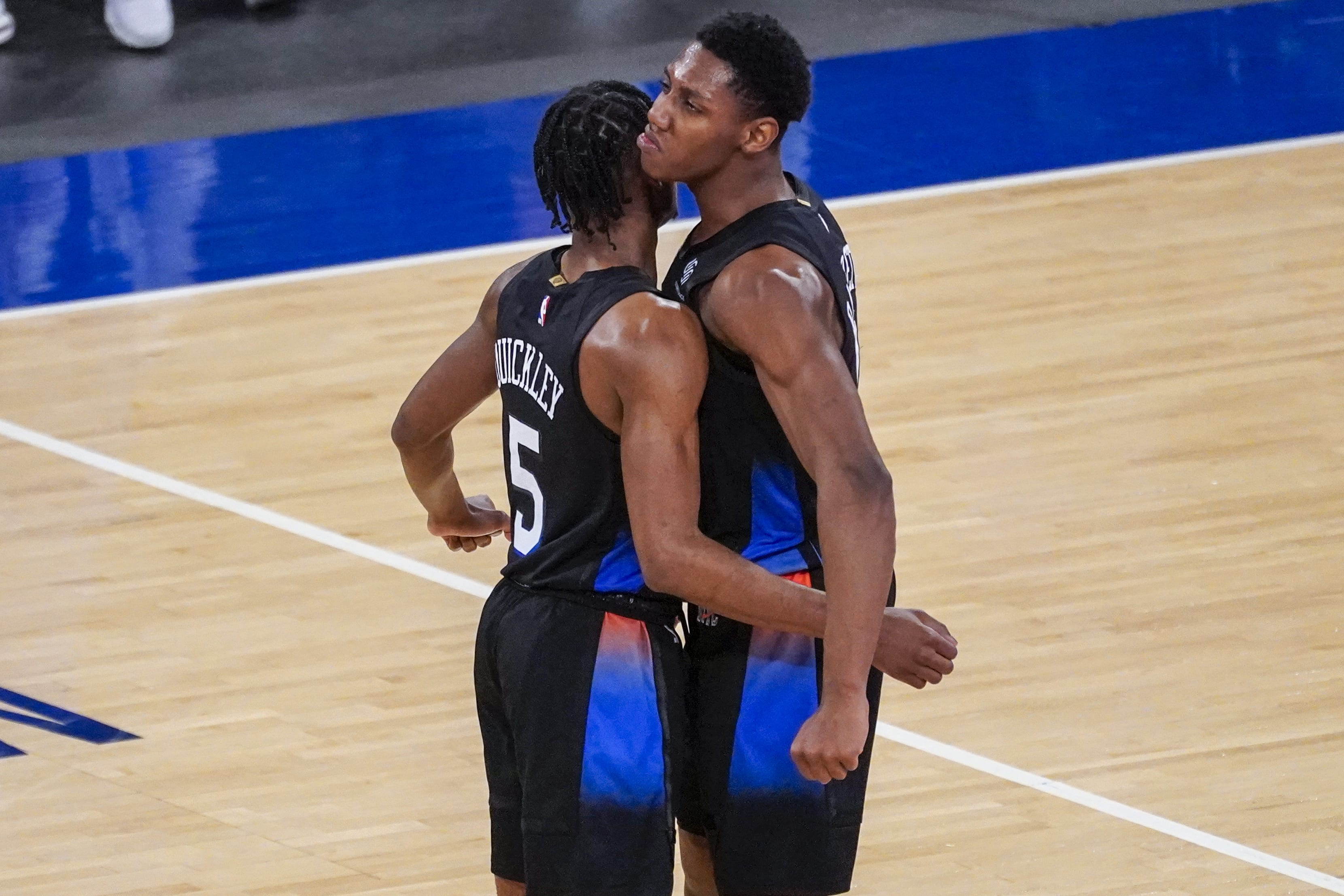 The New York Knicks are preparing to take on the Phoenix Suns on Monday evening in an attempt to stretch their winning streak 210 games. The Suns, however, ranked second in the Western Conference and will be a significant challenge for a New York team that has elevated their level of play recently.

Phoenix has a stellar team, led by Devin Booker, DeAndre Ayton, and Chris Paul. I would be remiss not to mention Mikal Bridges as well, as the Suns have a very talented starting five, with four of them averaging over 13 points per game.

Stopping them will be incredibly difficult for the Knicks, but luckily they host the number one defense in the NBA and have regularly kept teams below 105 points, giving themselves a great chance of extracting victory on any given evening.

However, Starting Center Nerlens Noel understands that there’s a lot more work to do and goals to accomplish.

“There’s still so much work to do,” Noel said Sunday. “But I think it’s a special moment, special year, special season. And you really want to cap it off in the best way possible.”

Three keys to beating the Phoenix Suns for the Knicks:

Even Phoenix forward Torrey Craig admitted that the team struggles when they don’t have the lead. He suggested that they have to play better with a lead and learn how to stay composed throughout the game, and with the Knicks’ tantalizing defense, it will be difficult for them to break away.

As long as Tom Thibodeau and his team remain committed to their biggest strength, they will be in this contest, and there’s no doubt they can emerge victorious when considering their most recent success.

Limiting Chris Paul is easier said than done, as he’s averaging 16 points per game, 8.7 assists, and 4.6 rebounds. He ranks fifth in total assists and 52nd in points, as he’s experienced somewhat of a resurgence with Phoenix this year.

As long as the Knicks protect the paint and keep defenders on Paul, they can limit his influence, but he will leave his mark one way or another. Alternatively, their biggest problem might be Devin Booker, who’s averaging 25.3 points, as the Suns’ leading scorer. While his three-point percentage is lacking this year, he’s incredibly talented from mid-range and driving to the rim. Protecting the elbow and perimeter will be important, and thankfully the Knicks will have their star shot blocker this year, Noel, available to help protect the interior.

3. Batman and Robin must score

The Knicks’ offense simply runs through Julius Randle and RJ Barrett, who are having themselves stellar seasons thus far. Randle earned his first All-Star appearance this year, averaging 24 points per game and 10.5 rebounds over 37.5 minutes. Barrett, on the other hand, is averaging 17.6 points and 5.7 rebounds, showing an incredible developmental leap this season.

The chemistry that Randle and Barrett have shown has not only fueled the team but help supplement a less than inspiring offense at times. As long as those two are playing efficient basketball and producing on the scoreboard, the Knicks always have a good chance of emerging victorious.