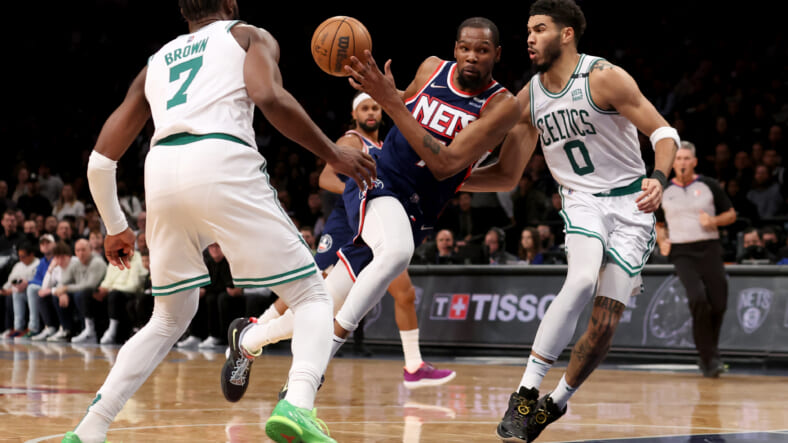 It’s the biggest reason why Durant still remains a Net more than a month after he requested a trade.

His preferred landing spots — Miami Heat and Phoenix Suns — could not meet the Nets’ asking price. And so are the Boston Celtics, who have emerged as an intriguing option since word came out that they offered Jaylen Brown as the centerpiece of their package. But the Nets reportedly countered to add Marcus Smart and multiple picks.

A new wrinkle to the Nets-Celtics’ previous discussion has emerged.

“According to the source, Brooklyn initially tried to pry both Jayson Tatum and Jaylen Brown from Boston. That proposal went nowhere, of course. The source confirmed recent reports that Brooklyn later shifted its focus to a deal centered on Brown, Marcus Smart, and a massive haul of future first-round draft picks. But the Celtics were not interested.”

per Adam Himmelsbach of the Boston Globe

Curiously, Boston was able to land both Tatum and Smart in the draft using Brooklyn’s picks acquired from the now infamous Kevin Garnett and Paul Pierce trade in 2013.

Suffice it to say the deal is dead unless the Nets, after Durant pressed his bid to get out of Brooklyn in a face-to-face meeting with Nets governor Joe Tsai, lower their asking price.

Durant has reportedly added the Celtics and the Philadelphia 76ers to his list of preferred destinations after delivering his ultimatum to Tsai in London over the weekend, citing lost faith in the Nets’ direction and leadership.

Tsai has since expressed his support to his GM Sean Marks and coach Steve Nash, whom Durant wanted to get fired if he returns to Brooklyn, a calculated move to put more pressure and hopefully accelerate his exit.

It remains unclear what picks the Sixers can attach to a package of Tyrese Maxey, Tobias Harris and Matisse Thybulle pending the result of an ongoing tampering investigation surrounding the free agent signings of PJ Tucker and Danuel House and James Harden’s discounted contract extension.

Despite turning 34 next month, Durant will enter his 15th NBA season as one of the top players. His messy status has stalled both the trade and free agent market.