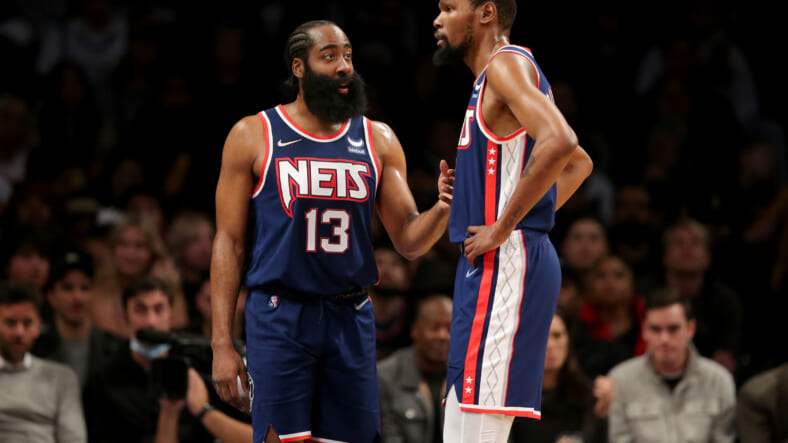 The Philadelphia 76ers have emerged as another option for Brooklyn Nets‘ disgruntled superstar Kevin Durant — a move that would reunite him with James Harden.

According to SNY’s Ian Begley, “there were high-ranking members of the Sixers who’ve felt strongly about engaging with Brooklyn on a Durant trade.”

And the feeling is mutual.

“Well, it’s worth noting that, in addition to Boston, Durant also sees Philadelphia as another welcome landing spot, per people familiar with the matter,” Begley added.

The news of a potential Durant-Harden reunion came after the former teammates spent time together in London, where Durant delivered his ultimatum — trade me or fire Sean Marks and Steve Nash — to Nets governor Joe Tsai over the weekend.

The Sixers, however, are pick encumbered owing to their previous transaction with Brooklyn to acquire Harden at the past trade deadline. They owe the Nets their 2023 first-round selection and a top-8 protected first-round pick in 2027. They also attached a top-6 protected pick in 2025 as part of the Al Horford salary dump to Oklahoma City two years ago.

Philadelphia’s best offer would have to be Tyrese Maxey, Tobias Harris and Matisse Thybulle and their 2029 first-round draft pick plus lifting the protection of the 2027 first-round pick they owed to the Nets.

Will this package be enough to land Durant?

Sixers’ president Daryl Morey is a persistent trade suitor, as attested by the Ben Simmons-Harden swap.

A big 3 of Durant, Harden and Embiid in the Eastern Conference would dramatically improve the Sixers’ title odds. They will still have some depth with PJ Tucker, DeAnthony Melton, Georges Niang, Furkan Korkmaz and Shake Milton.

But there’s one potential roadblock from a Morey-Marks rematch on the negotiation table: the ongoing tampering investigation on the Sixers that, if proven true, could dry up their remaining draft capital.

Unless that is settled, Morey cannot fully engage the Nets in trade discussion.