A Brown, Smart trade for Durant could reshape Nets into solid defensive team 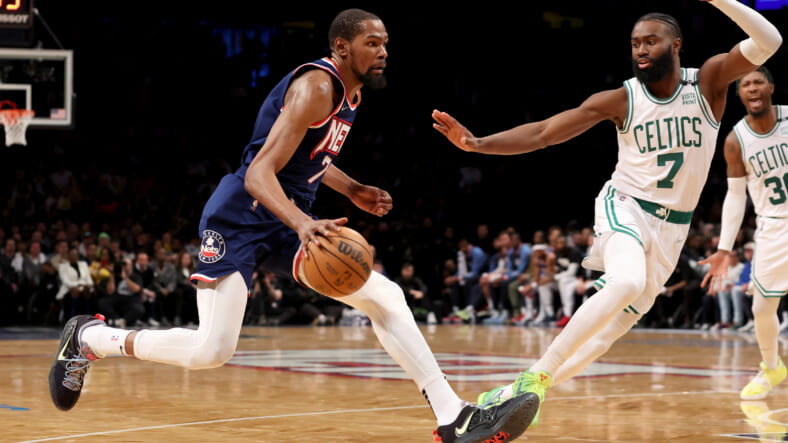 Brown, the third overall pick in 2016, was part of the Celtics’ haul in fleecing the Nets in exchange for the aging Paul Pierce and Kevin Garnett in 2013, which serves as a benchmark and, simultaneously, a cautionary tale for trading future first-round picks for stars.

The Nets are trying to flip the table on the Celtics as they squeeze the best possible package for Durant, who is two months away from turning 34.

“The Celtics offered Brown, guard Derrick White and a draft pick to the Nets for Durant, sources said. The proposal was rejected, and Brooklyn has asked Boston — in any proposal — to include Brown, Defensive Player of the Year Marcus Smart, draft picks and potentially one more rotation player, those sources added. Currently, the Celtics are less inclined to include Smart along with multiple other player assets or pick assets, but the franchise is mulling over the next steps on how to approach discussions,” The Athletic’s Shams Charania reported Monday.

While the Celtics are not on top of Durant’s preferred landing spots, they have the combination of young stars and picks that could meet the Nets’ steep asking price. Boston can trade its 2025, 2027 and 2029 first-round picks and pick swaps to sweeten a potential deal for Durant.

Brown wasn’t happy about the trade rumors judging by his tweet, a perceived reaction to the news. But if traded, Brown, an All-Star in 2021, could use a new environment without Jayson Tatum to hit his ceiling. Brown is eligible for a $111 million, three-year extension beginning Oct. 1, which he will likely turn down. Swapping places with Durant could give him a greater chance to become an All-NBA player down the road, making him eligible for a supermax contract if he hits free agency.

The 25-year-old Brown helped hold Durant to his second-lowest shooting percentage (38.6 percent) in a playoff series in the Celtics’ sweep of the Nets on their way to the NBA Finals. If the Nets successfully haggle for Smart, the reigning Defensive Player of the Year, it would dramatically reshape their roster, moving on from the offensively-loaded superstar trio of Durant, Kyrie Irving (presumably next to be traded after Durant) and James Harden with a much younger and more athletic of Brown, Smart and Ben Simmons, all a perfect fit to the ever-evolving NBA now putting more premium on defensive switchability.

If this trade goes down, the most intriguing subplot will be Steve Nash’s future with the team. Is Nash the right coach? It’s a question for another day.