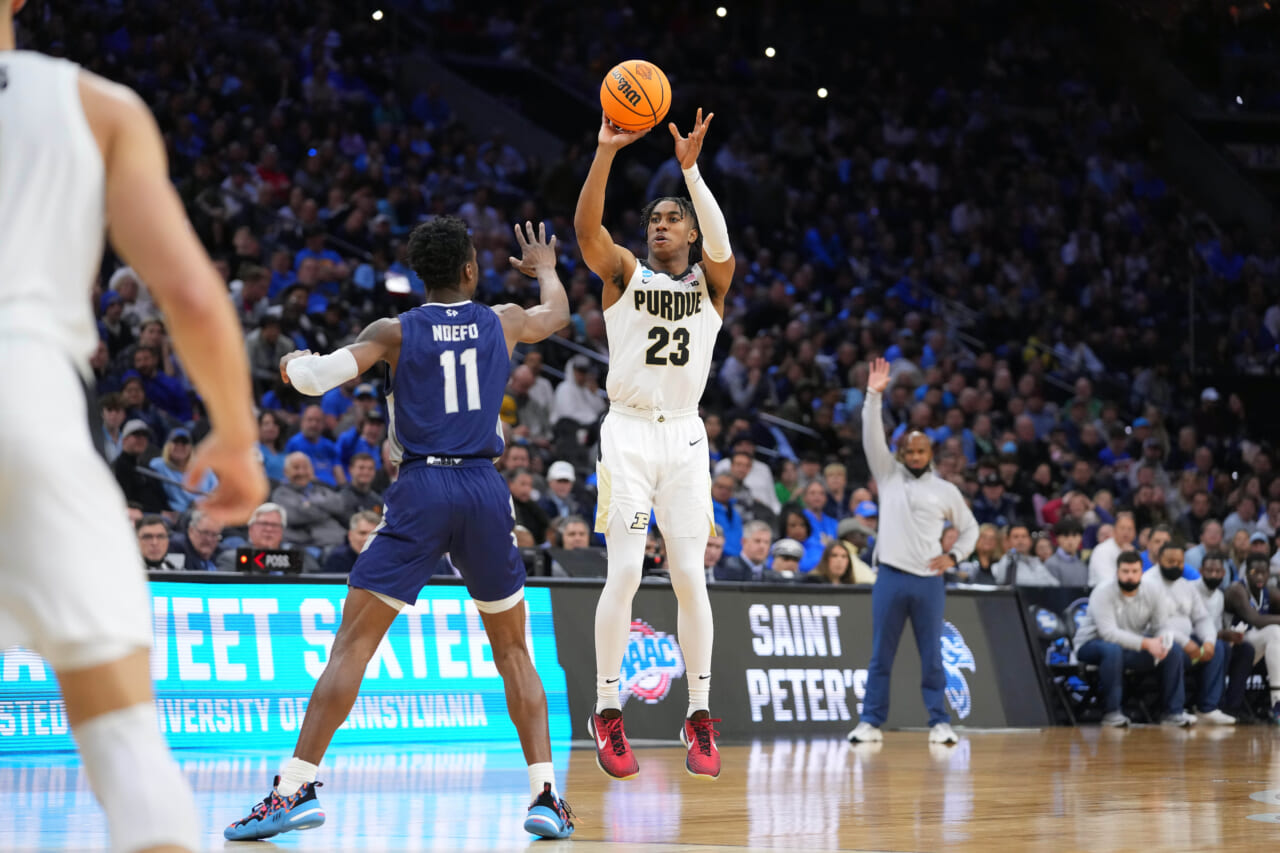 The New York Knicks are not the only team cooking up a trade-up scenario for Purdue’s Jaden Ivey with eight days left before the NBA Draft.

Oklahoma City Thunder, with a seemingly bottomless draft capital, are also reportedly eyeing Ivey along with Shaedon Sharpe in a trade involving their No. 12 pick. Unless the Thunder offer Shai Gilgeous-Alexander or Josh Giddey which is highly unlikely, the Knicks have the upper hand if they engage with Sacramento for its No. 4 pick. The King’s lottery pick is reportedly widely available for a pick swap and a proven veteran who could help the Kings end their 16-year playoff drought.

The Thunder have been doing their due diligence on Ivey, including inviting him to a workout.

Ivey is the projected No. 4 pick of this year’s draft behind three freshmen — Auburn’s Jabari Smith, Gonzaga’s Chet Holmgren and Duke’s Paolo Banchero.

However, Ivey is reportedly not keen on landing in Sacramento.

“The Kings aren’t Ivey’s preferred destination but have proved willing to take players without the benefit of workouts and medical information in the past, doing so as recently as a year ago when selecting Davion Mitchell,” ESPN’s Jonathan Givony wrote in his latest mock draft.

It’s an open secret that the Knicks covet Ivey after using one of their 20 interview slots at the NBA Draft Combine and being front and center in his Pro Day. Add the fact that Ivey is a Creative Artists Agency client. Ivey shares the same agent (CAA’s Austin Brown) with Knicks former lottery pick Obi Toppin.

The Knicks are reportedly monitoring Ivey’s projected range in the draft.

“Something worth noting: Members of the organization have sought information on which teams have a strong interest in Ivey. So, at the very least, they have an interest in where Ivey may go in the draft,” SNY’s Ian Begley wrote.

If the Knicks missed out on Ivey, their reported options are pursuing other CAA clients — Dallas Mavericks’ breakout star Jalen Brunson in a complicated sign-and-trade or a swap for Indiana Pacers’ Malcolm Brogdon.

A dark horse is Minnesota’s disgruntled point guard D’Angelo Russell, who shares the same agent (Aaron Mintz) with Knicks star Julius Randle and a player whom Knicks consultant Gersson Rosas aggressively pursued when he was still the Timberwolves president.

Fox, who has been sidelined since Jan. 19 with an ankle injury, is experiencing a down year in the Kings’ crowded backcourt. He’s averaging 21.0 points and 5.2 assists this season, down from last year’s 25.2 and 7.2. He’s also shooting a career-low 24.8 percent from behind the arc.

The continued rise of Tyrese Haliburton and the emergence of Davion Mitchell have made Fox expendable.

“This has been reported elsewhere, but I’ve heard as well that the Knicks have shown some interest in De’Aaron Fox,” said Brian Windhorst on The Hoop Collective podcast. “The player that makes the most sense in that swap would be Julius Randle.”

Like Fox, Randle’s numbers (18.5 points, 9.9 rebounds and 5.1 assists, and 30.3 percent 3-point shooting clip) are also down this season after leading the Knicks to the playoffs last year and making it to the All-NBA Second Team.

Both the Knicks and Kings are currently out of the playoff and the play-in picture. A swap between their two struggling stars could give them a jolt.

“I’ve run hot and cold on De’Aaron. I like his mentality, and I think if you could get him, I’m not sure if that trade changes that much for the Knicks, but it certainly alleviates the deteriorating issue in New York with Julius Randle — both his relationships with Thibs (Tom Thibodeau) and his relationships with the fans.” Windhorst added.

Randle has earned the ire of a section of the Knicks fan base due to his inconsistent effort and poor body language this season. There are no signs, however, of a Randle-Thibodeau rift. The Knicks coach has been Randle’s most vocal ally, lawyering for the struggling Knicks star in press conferences.

Fox is in the first year of a five-year super-max extension worth $163 million, while Randle signed a four-year, $117 million extension last summer.

Meanwhile, a section of the Kings fan base wouldn’t have an issue with the possible Fox-Randle swap.

"If they moved Fox for Randle, I wouldn't have an issue with that…"

Randle has familiarity with current Kings coach Alvin Gentry, who handled the Knicks star in New Orleans before moving to New York.

Fox could become the best Knicks points guard entering his prime in a long while if he lands in New York.