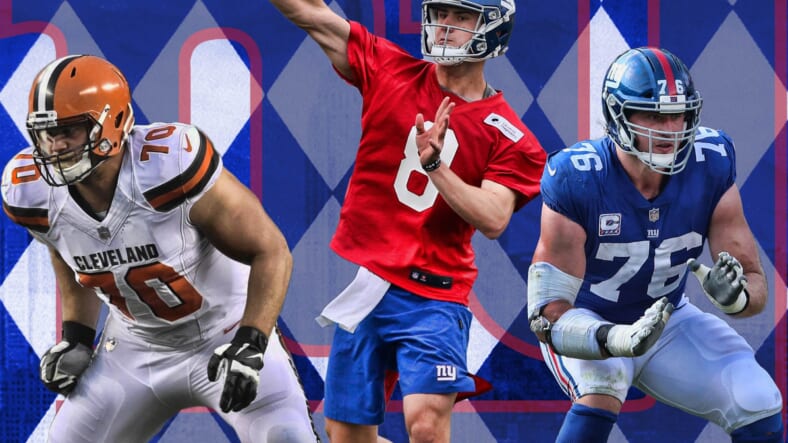 The New York Giants‘ offense has been rebuilt over the past two seasons. Dave Gettleman came in last year and vowed to rebuild the offensive line. That is exactly what he has done.

The Giants offensive line was one of the league’s worst for years. But now, in 2019, things are starting to take shape. New York signed left tackle Nate Solder to a record-breaking contract last offseason, then drafted guard Will Hernandez. In 2019, the Giants traded for Kevin Zeilter, one of the best pass-protectors in the NFL, and upgraded the right tackle position.

What is a great offensive line without some offensive playmakers? The Giants went ahead and made big splashes on offense in the 1st-round of the 2018 and the 2019 NFL Drafts. They drafted Saquon Barkley with the 2nd overall pick in 2018. Barkley went on to win Offensive Rookie of the Year. Saquon will benefit greatly from the Giants’ upgraded offensive line in 2019, but he is not the only one.

Daniel Jones dodged a bullet in the 2019 NFL Draft. He could have ended up in Washington with Ereck Flowers as his starting left tackle. He is also lucky to be joining Big Blue in 2019 and not 2018. Dodge the Flowers bullet twice.

In 2018, the Arizona Cardinals had the worst offensive line in the league. Unfortunately, they also had a new 1st-round quarterback starting with Josh Rosen.

The once-promising prospect never found a groove behind the league’s worst line. Josh Rosen threw only 11 touchdown passes with 14 interceptions in 14 games, and was then traded the following offseason.

Jared Goff is a perfect example of how an offensive line can affect a young quarterback’s confidence and performance. Goff played in 7 games in his 2016 rookie campaign and only threw 5 touchdowns with 7 interceptions.

In 2017, Jared Goff became one of the top quarterbacks in the NFL. His touchdown total soared up to 28 touchdown passes, and his interception number stayed stagnant at 7 despite playing in 15 games.

Jared Goff and Josh Rosen serve as perfect examples of how an offensive line affects a young quarterback’s play. Daniel Jones will step into an offense that features the NFL’s best pass-blocking guard in Kevin Zeitler, which will help him tremendously.

Daniel Jones will benefit from Nate Solder’s reliability on his blindside. The veteran leadership provided by Solder, Zeitler, and Remmers will also keep the line consistent for Jones. Up-and-coming left guard Will Hernandez will also play a big part in keeping Daniel’s confidence high.

The New York Giants have perfectly reconstructed their offensive line to better themselves for the future. The future franchise quarterback was drafted with perfect timing. Daniel Jones will step into an offense full of exciting playmakers (such as Saquon Barkley and Evan Engram) and a solid offensive line.