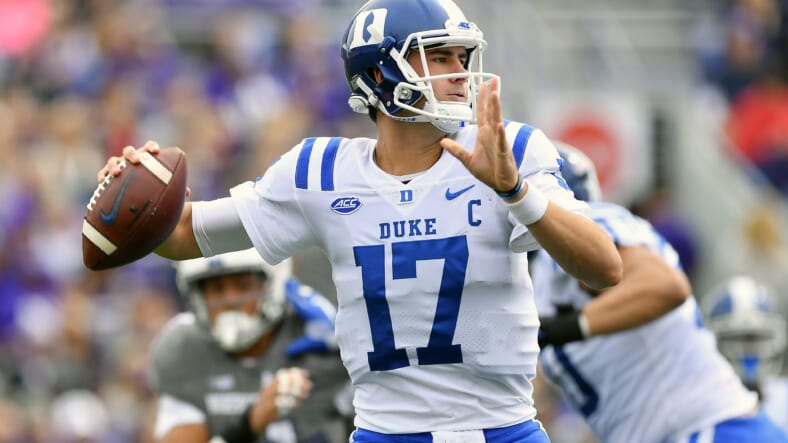 The New York Giants made another mind-blowing mistake and drafted quarterback, Daniel Jones. The Duke passer has shown some valuable attributes but has ultimately looked underwhelming against better collegiate teams.

Jones is a pocket passer with the ability to run for extra yardage. Imagine Eli Manning but more mobile – Jones is the most experienced quarterback of all the options, which was likely valued by the Giants brass.

This past week, rumors arose that the Giants would take Jones with the 6th overall pick. It’s safe to say, most did not believe this was a reality, especially with players like Josh Allen and Ed Oliver still on the board.

What does Daniel Jones bring to the New York Giants?

Jones has a prototypical body for an NFL quarterback, standing at 6â€™5â€³, 220-pounds. His abilities on the other hands have been put into question as of late. In 2018, he racked up 2,674 yards with 22 touchdowns and nine interceptions. His stats donâ€™t even compare to Haskinsâ€™ 50 scores and eight interceptions. Despite the difference, Jones has an attractive array of skills that offers plenty of value for the Giants.

Three years of experience with Duke helped push him to the top of the draft for Big Blue. Additionally, he was scheduled to attend Princeton, making him not just a great athlete, but an extremely intelligent one as well.