New York Giants: Why Saquon Barkley Will be Even Better in 2019 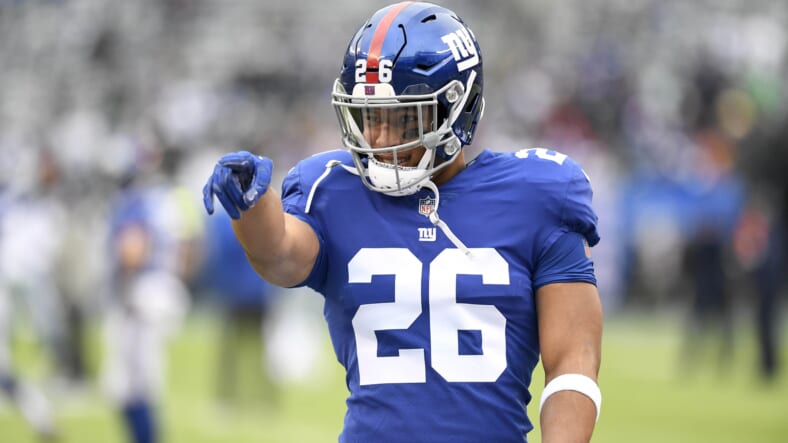 After bursting onto the NFL scene in 2018, New York Giants running back Saquon Barkley has already proven himself as one of the premier backs in the game. With impressive numbers like an NFL leading 2,028 yards from scrimmage during his rookie year, itâ€™s easy to assume heâ€™s already reached his ceiling. But, believe it or not, there are a number of reasons why Saquon Barkley will be even better in 2019 – and hereâ€™s why.

Why Saquon Barkley Will be Even Better in 2019:

He Will be Properly Utilized for a Full Season

If you watched the first half of the Giantsâ€™ 2018 campaign, you most likely saw an offense that looked disconnected and lost. Much of that struggle came from the strain of finding the best way to use Barkley in the offense.

If you look at Barkleyâ€™s numbers from the first half of the season, while still impressive, they are not nearly as good as they couldâ€™ve been. His 518 rushing yards on 111 carries and 497 receiving yards on 58 catches are worthy of note, but there are issues with this production.

A running back is meant to run, not be a receiver. Yes, part of being a great back is having great hands and being a weapon coming out of the backfield. But to truly succeed in the NFL, you need to be able to gain yards on the ground.

When he got the number of touches he deserved in the second half of the season, his numbers skyrocketed. His 788 rushing yards on 150 carries would have led the league if they were expanded over a full season.

His 224 receiving yards on 33 receptions, while less than the first half, were still quality numbers for a running back. And perhaps most importantly, the Giants went .500 in the second half of the season. When Barkley is being utilized as he should, he not only elevates his own game, but he makes his team better as well.

He Is Now the Primary Playmaker

With the departure of Odell Beckham Jr. taking place this offseason, it is expected that Barkleyâ€™s role will increase in the coming season. When you have a superstar on your team, you find ways to get him the ball. It is what the Giants did with Beckham, and it got him some great numbers over the years. Now the Giants will be doing that with Barkley.

Take a look at the Dallas Cowboys in 2016. Their main source of offense came from the legs of running back, Ezekiel Elliott. The Cowboys were one of the best teams in the league that year, going 13-3. Who is the main reason to thank for that? The excellent production from their superstar running back.

Imagine a Giants team where Barkley is getting 25 touches per game and leading the offense each drive. In games last season where Barkley eclipsed over 130 total yards of offense, the Giants went 3-1. If you can get him the ball more, which will likely be the case in 2019, he will have even better numbers.

Part of what makes Barkley so special are the numbers that he put them up behind such a weak line. As mentioned earlier, he led the league in yards from scrimmage with little help from his big men up front. Suppose Barkley had one of those elite offensive lines? Well, this year we will get closer to seeing what he can truly do.

The only two staples of the Giantsâ€™ bottom 12 offensive line last year were LG Will Hernandez and LT Nate Solder. The rest of the line featured a carousel of players throughout the season. That will change this upcoming season though, as the Giants found and brought back multiple key pieces this past offseason.

Center Jon Halapio, who started two games for Big Blue last season, will return after a season-ending injury. In those two games that Halapio played at starter, he graded as the fifth-best Center in all of the NFL. That is a great improvement from Spencer Pulley who was a liability at the position.

Along with the return of Halapio, the Giants acquired Guard Kevin Zeitler from Cleveland in the offseason. Zeitler, who played for the Brownsâ€™ second-ranked offensive line, will immediately help fortify the right side. He finished as the best-graded pass-protecting Guard in the game a season ago.

Besides some uncertainty at Right Tackle, the Giantsâ€™ offensive line will be much improved in 2019. Barkley will get an opportunity to showcase what he is capable of doing behind one of the better lines in the league. With a better line, Barkley could post some record-breaking numbers.

The Numbers He Could Potentially Put Up

With a full season of proper utilization, a Beckham-less offense, and a much improved offensive line, Barkley could put himself in the running for multiple records. Had Barkley been utilized properly for all of last season, he would have finished with 1,576 rushing yards, 488 receiving yards, and 16 total touchdowns. Those numbers on their own would pace the NFL in any given year. But adding the offensive line as well, things could be even more impressive.

And by impressive, I mean numbers that could put him in the talk for MVP depending on the performance of the team. It is very possible that Barkly could have a season with almost 2,000 rushing yards, 500 receiving yards, and 18-20 touchdowns. While those numbers may sound crazy, they are extremely possible, if not likely.