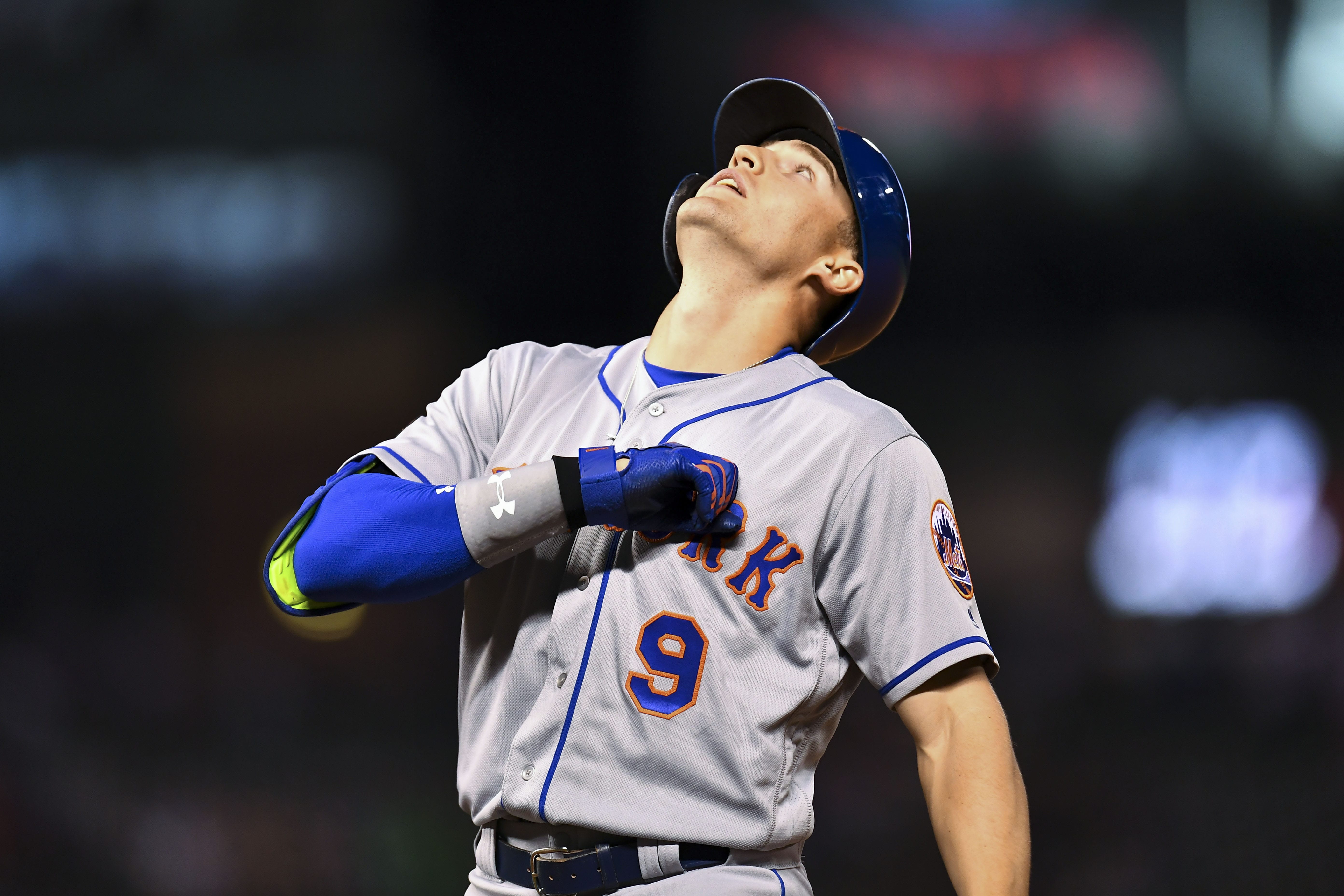 Brandon Nimmo has not played with the Mets since May 20th, but his heart and hustle is on his way back. Nimmo had his first game action for the St. Lucie Mets as he attempts to fully recover from his neck injury which has plagued a majority of his season.

He did exactly what you would expect during his first at-bat by drawing a walk. Nimmo finished the night 1-for-3 with a sharp single up the middle. He will likely need at least a week of action in the minors to get back to the big leagues. The Mets will be extremely careful with Nimmo, especially since he is recovering from a bulging disc in his neck.

Nimmo broke out in a big way for the Mets during the 2018 season. He slashed .263/.404/.483 with 17 home runs and 22 hit by pitches. The Mets were counting on another big season from Nimmo to join Michael Conforto and Jeff McNeil in the outfield heading into 2019. He struggled from the start, only hitting. 200 and striking out 48 times in 161 plate appearances before he was put on the Injured List.

As the season drifted on, the emergence of Dom Smith and J.D. Davis as outfield options softened the blow of losing Nimmo. Now with the Mets extremely weak bench and injuries to McNeil, Smith, Robinson Cano the urgency to have Nimmo back is higher.

With the Mets losing three out of four and Cano likely done for the season, Nimmo’s can become a spark plug as the left handed bat they desperately need. Their hot streak has also faded out, after losing three out of their last four. Nimmo’s return will be a shot of energy to the club and his return to his 2018 form is the type of player the Mets need to get themselves into a playoff spot. 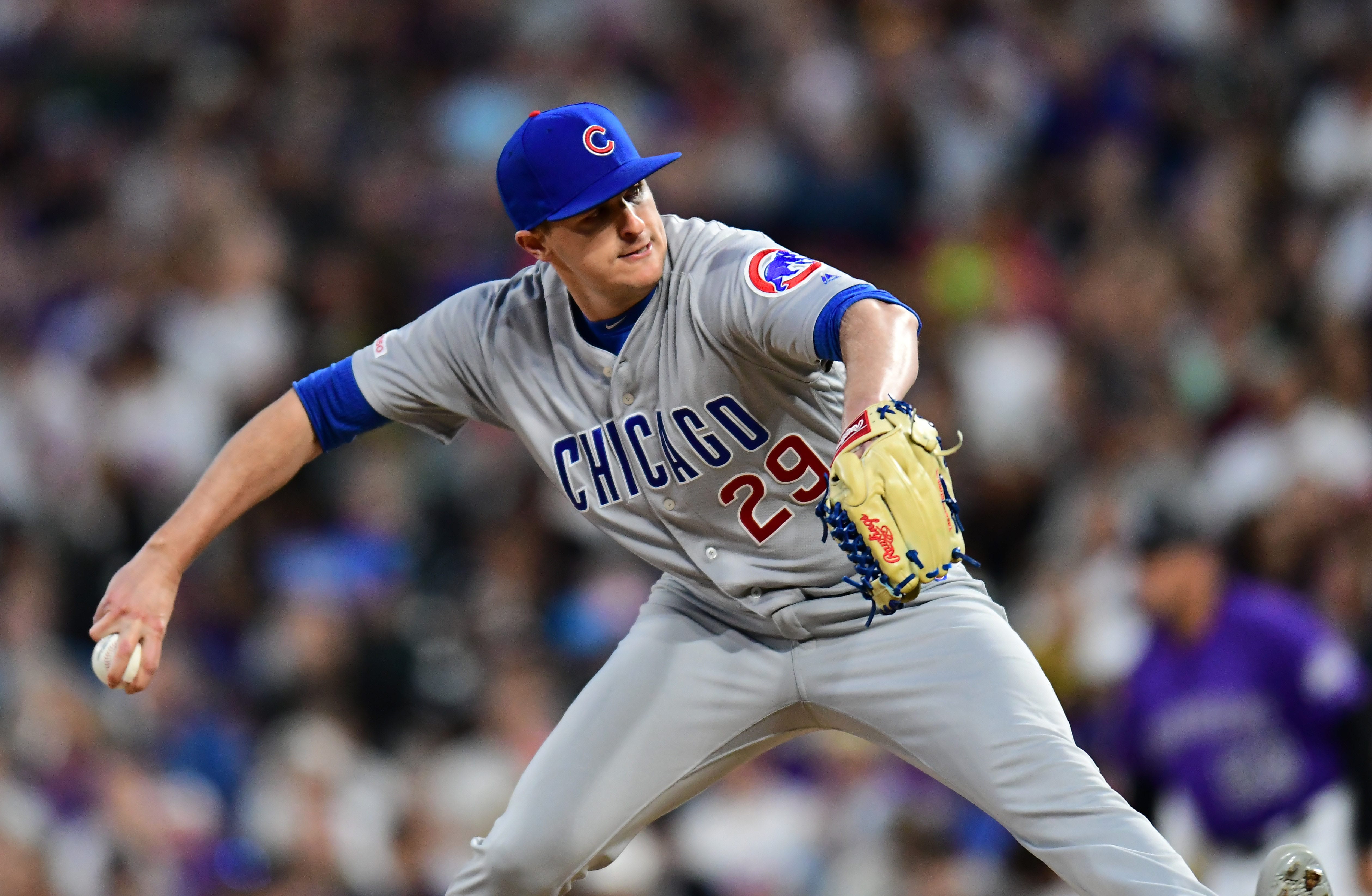 The New York Mets made a flurry of roster moves Thursday, headlined by signing veteran reliever Brad Brach. The Chicago Cubs released him on August 5th after a nightmare season. In 42 games he had a 6.13 ERA and walked 28 batters in 39.2 innings, after multiple good years.

We have signed free agent RHP Brad Brach. In order to make room on the 25-man roster, Donnie Hart has been optioned to Triple-A Syracuse. In addition, Brandon Nimmo has been transferred to the 60-Day IL. #Mets pic.twitter.com/mbrrLon9JM

This is a low risk move that couple pay off in a major way for the Mets. Judging by his ERA and walks this season, he would fit the mold of the June Mets bullpen. Diving deeper into the numbers shows a FIP of 4.13 which is lower than Steven Matz. His 10.2 K/9 is on par with the past years in his career.

How Can Brach Improve?

Pitching coach Phil Regan has played a major role of getting the Mets pitching staff back on track and they hope he does the same with Brach. He was one of the most consistent relievers in all of baseball during his time with the Baltimore Orioles and half a year with the Atlanta Braves in 2018. He pitched at least 60 innings, was an All-Star in 2016 and only had one year with an ERA above 3.50.

Phil Regan on his way to fix Brad Brach pic.twitter.com/ohP8s2vSDq

Just based on his pedigree, he might have needed a change of scenery to reclaim his past success. At worst, Brach deepens the Mets bullpen as a useful seventh man and if he reaches his potential he will pitch key innings down the stretch. Teams not too long ago were fighting to acquire Brach. If he turns his season around, along with Edwin Diaz, the Mets all of a sudden have one of the best bullpens in baseball.

Brandon Nimmo To The 60-Day IL

Donnie Hart was optioned to Triple-A after only one scoreless inning with the Mets. Brandon Nimmo was sent to the 60-day IL to open up a roster spot for Brach. Nimmo has been out since May 20th with a neck injury and has not performed in any baseball activities since June 18th. He had a breakout 2018 season and had high expectations this year, but has become an after thought now.

Brandon Nimmo's rehab from a bulging disk in his neck has taken longer than expected because of other physical issues that popped up at various points. But he is working out, and there is optimism he might begin a minor league rehab assignment within the next week.

The Mets hope Nimmo can resume baseball activities soon, but neck injuries are right below concussions in terms of how careful it has to be handled. The Mets miss from Nimmo’s defense as a true outfielder, compared to J.D. Davis and Dom Smith. They have replaced his hitting, but adding him back to the roster along with Smith deepens what is currently an anemic bench.

The New York Mets received two things that have been missing over the last few weeks. They got a solid start from Steven Matz and their offense finally broke through to put a team away. The Mets offensive attack was spearheaded by the bat of Brandon Nimmo.

Steven Matz averaged 4.5 innings per start and had an ERA of 4.42 going into last night. Matz gave the Mets six shutout innings and escaped out of jams the same way Jacob deGrom did in his start. He kept the Milwaukee Brewers from getting an extra base hit and pitched into the sixth inning for the second time this season.

The Mets needed the back of the rotation to pitch better and the starts from Matz and Jason Vargas, give the Mets hope that things are changing. The back end of the rotation does not need to be a trio of aces like the Houston Astros have. Matz, Vargas and Zack Wheeler just have to go out, compete and give the Mets a chance to win. A positive sign for the Mets is their starters have thrown 17 consecutive scoreless innings (Wheeler, deGrom, Matz).

Brandon Nimmo has been dynamite out of the leadoff spot and he showed it again last night. He got on base all five times he went to hit and came a home run shy of the cycle. Not only is Nimmo getting on base at a terrific rate, but he has a .991 on base plus slugging percentage. If Nimmo qualified for the league leaders, he would be seventh in the big leagues. This puts him in the same company as Jose Ramirez, Kris Bryant and Aaron Judge. He certainly does not match their power, but he is an example of a different way to be a dangerous hitter.

With Yoenis Cespedes and Juan Lagares missing an extended period of time, Nimmo has been irreplaceable in the Mets lineup. The is no doubt he has had the best season of any Mets outfielder so far. If he keeps up the pace, there is no doubt that Nimmo deserves to continue to see everyday action when Cespedes returns. He has certainly shown a lot of promise as a future leadoff hitter for the Mets.

The Mets look to make it back to back wins as the send Noah Syndergaard to the mound tonight to take on the Brewers. 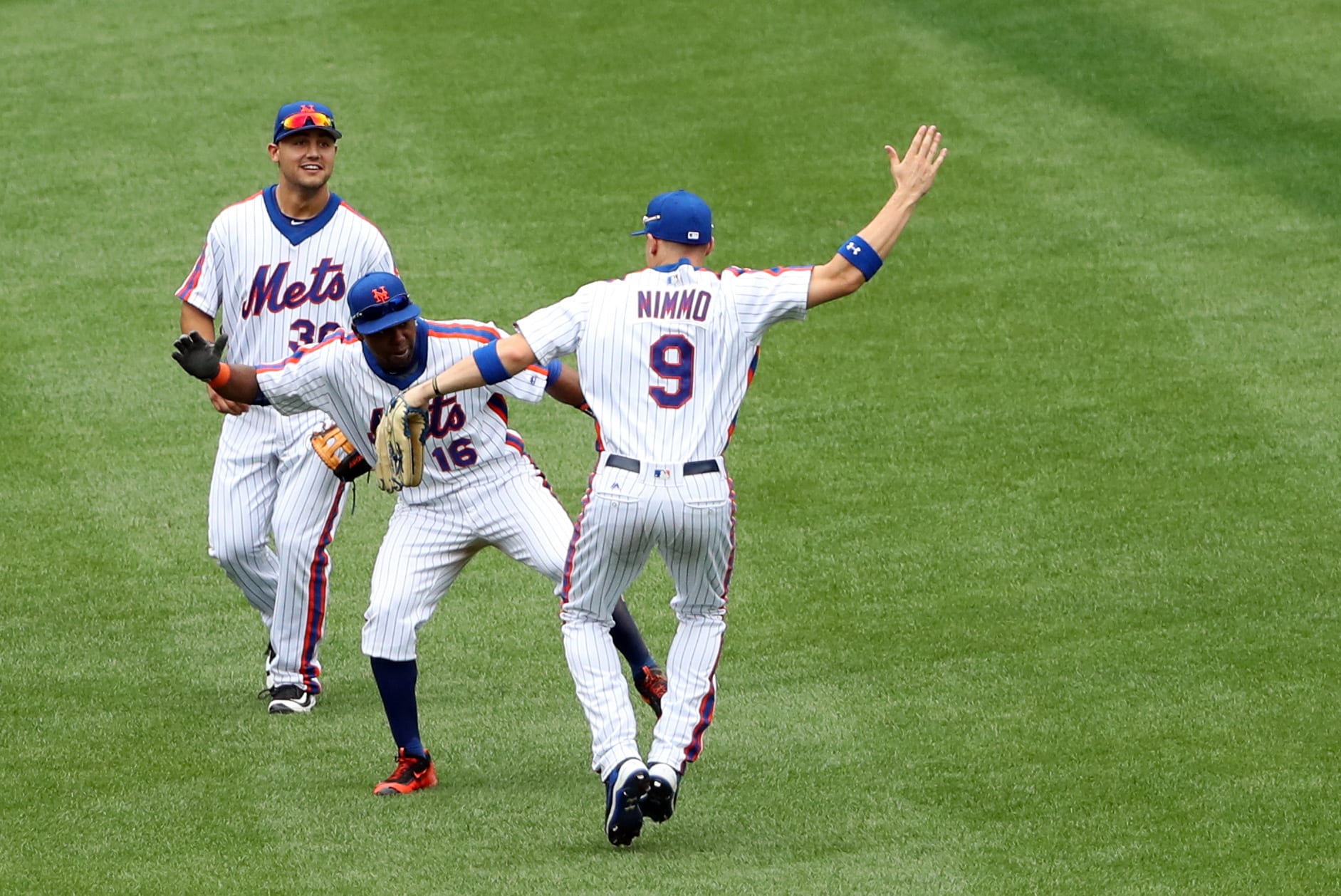 Michael Conforto is set to return to the New York Mets before his original May 1 date. The Mets have to figure out how to make room for Conforto in their crowded outfield.

There will be no changes when it comes to Yoenis Cespedes or Jay Bruce in the outfield. The decision to demote either Brandon Nimmo, Juan Lagares is a difficult one for the organization to make. The Mets could also demote Phillip Evans, if they choose to have five outfielders.

Nimmo has shown his prowess for working deep counts and ability to be the Mets leadoff hitter. He can also play all three outfield positions and is a solid bat to have off the bench. Nimmo has shown he is a quality outfielder and has solidified his spot on the Mets roster. The Mets have been high on Nimmo since they drafted him and they likely will not want to remove the hustle and patience he brings to the Mets.

Lagares is a gold glove center fielder but has always struggled with being a consistent hitter. It is unlikely the Mets move Lagares because he is undoubtedly the best defensive outfielder they have. His glove has been a game changer in the years past which keeps him on the Mets roster year after year. If the Mets were to choose between Nimmo and Lagares, they would likely go with Nimmo. Nimmo is younger, a better hitter and can play all three outfield positions.

How the Mets Will Handle Conforto When He Returns

Conforto’s will likely be worked into everyday action slowly and with caution. Manager Mickey Callaway has said he does not want to overwork guys in the regular season and make sure his bench players do not spend too many consecutive games on the bench. The days of 150-plus games being played is most likely over.

Conforto will likely reclaim his spot as the Mets leadoff hitter and center fielder when he returns. In order to give Adrian Gonzalez some rest, Bruce could play first base which would move Conforto to right and Nimmo/Lagares to center. The Mets can do a lot many different things with their lineup and they do not have a player Callaway is afraid to play.

Getting Conforto back healthy makes the Mets lineup even more dangerous. It gives the Mets and outfield that is one of the very best in baseball and can all be All-Stars. Conforto was one the few bright spots of a dark 2017 and will be one of the key pieces the Mets need to make another World Series run in 2018.