Can Yankees’ Josh Donaldson turn things around in 2023?

When the New York Yankees acquired Josh Donaldson to man the hot corner, it was a completely mixed bag of feelings from the fanbase.

The Yankees sent fan favorite Gio Urshela and Gary Sanchez to the Twins in exchange for JD and IKF, as well as Ben Rortvedt. At the time of the trade, I was on the side that was saying, “hey, this could actually be a sneaky good move.” Needless to say, it was anything but that, as Josh Donaldson quickly skyrocketed up the hitlist for Yanks fans worldwide.

Donaldson’s skill is certainly not in question, and when one takes a look back at his career stats, there’s no doubting just how talented he was.

Sadly, the keyword there is “was.” Donaldson was absolutely putrid offensively, and in the postseason, he was one of the many guys who seemingly fell off the face of the earth. Most notably, he was seen laughing as he went back to the dugout following a strike three, looking on a hanger right down the middle of the plate in the ALCS. That moment seemed to be the final nail in the coffin for how his first season as a Yankee went, and many believe that that is the version of JD that is here to stay. 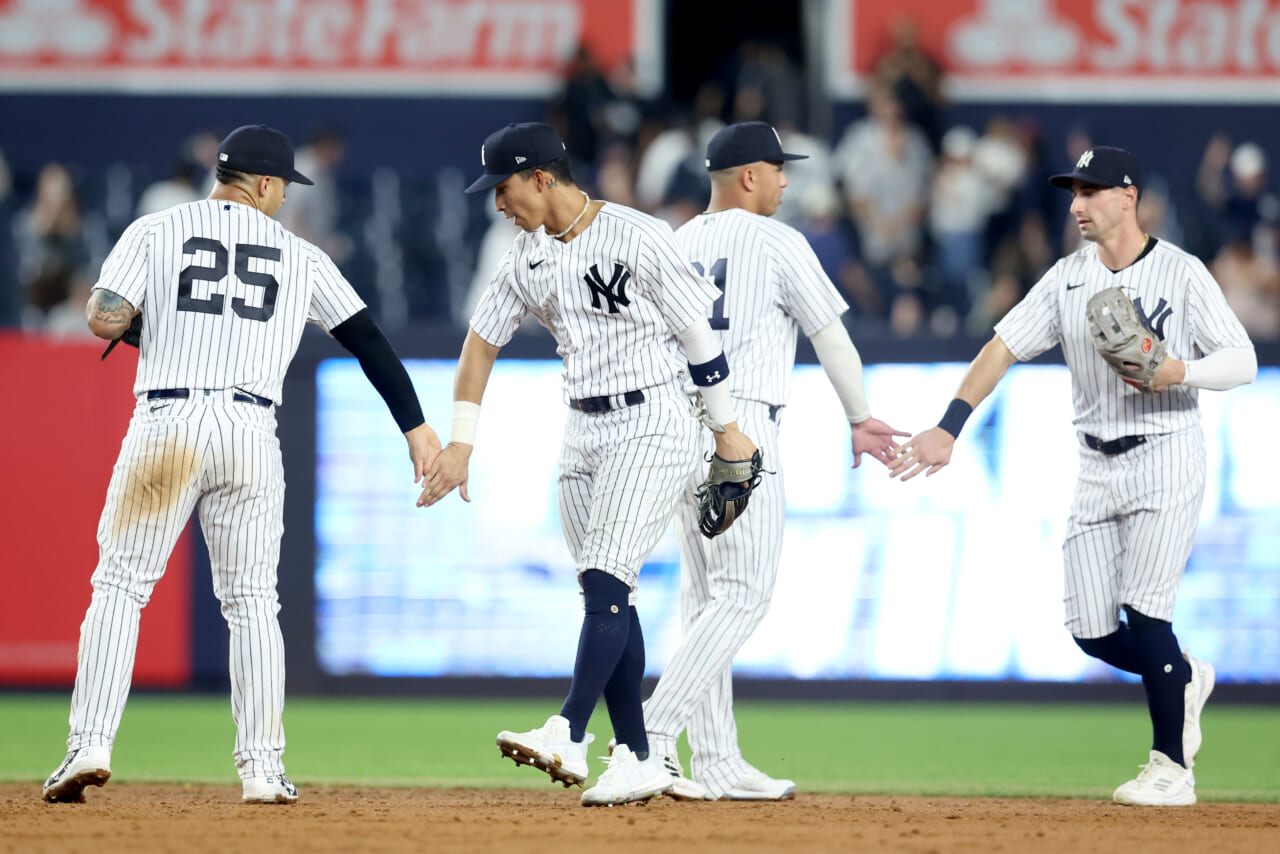 Projecting the Yankees’ starting infield for the 2023 season

Posted: January 29, 2023
The New York Yankees have a difficult sequence of events ready to unfold during spring training. Manager Aaron Boone will... [...] 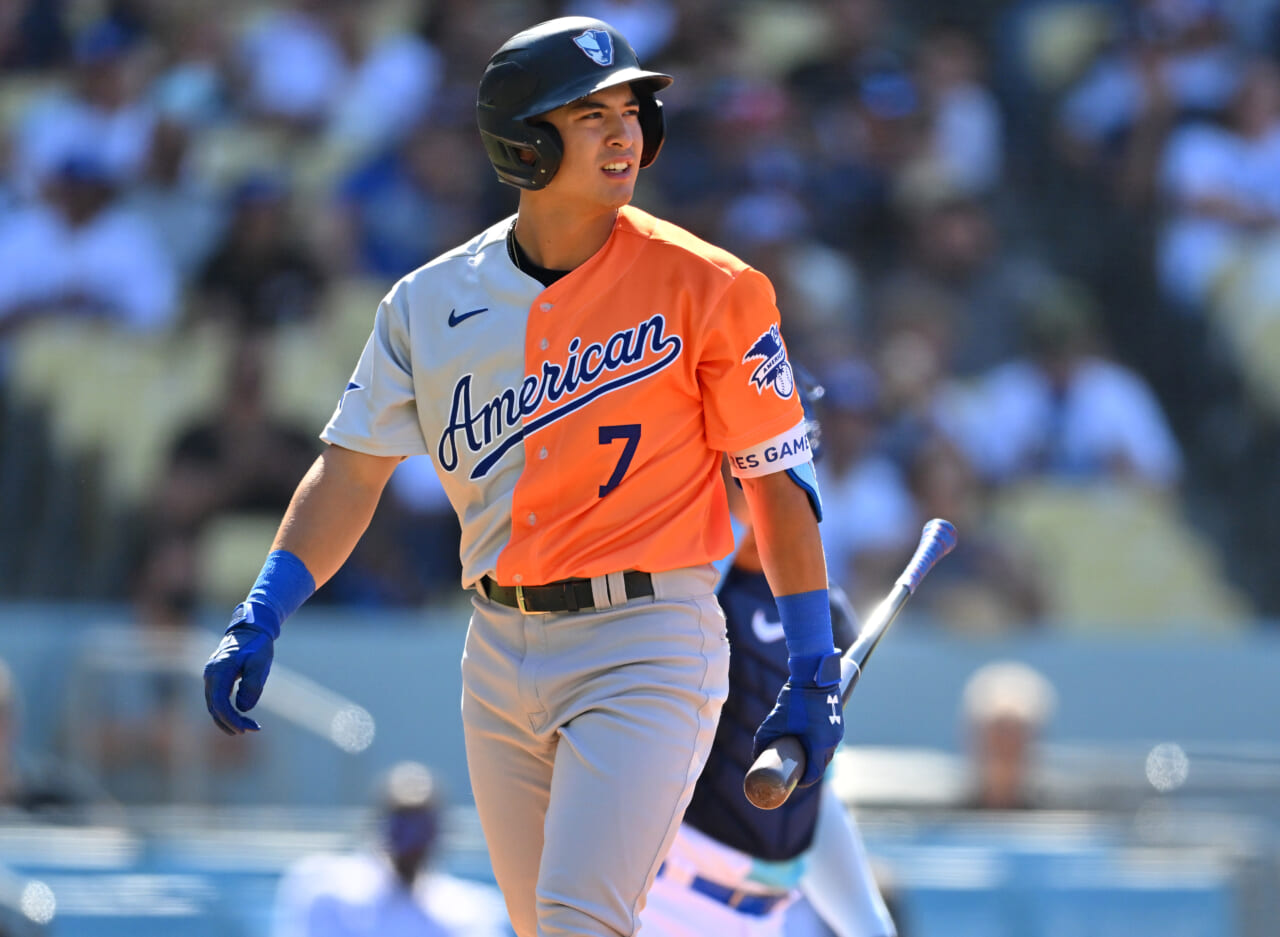 How the Yankees should deploy Anthony Volpe in 2023

Posted: January 29, 2023
The talk of the town for the New York Yankees is star prospect, Anthony Volpe. Management has given Volpe the... [...] 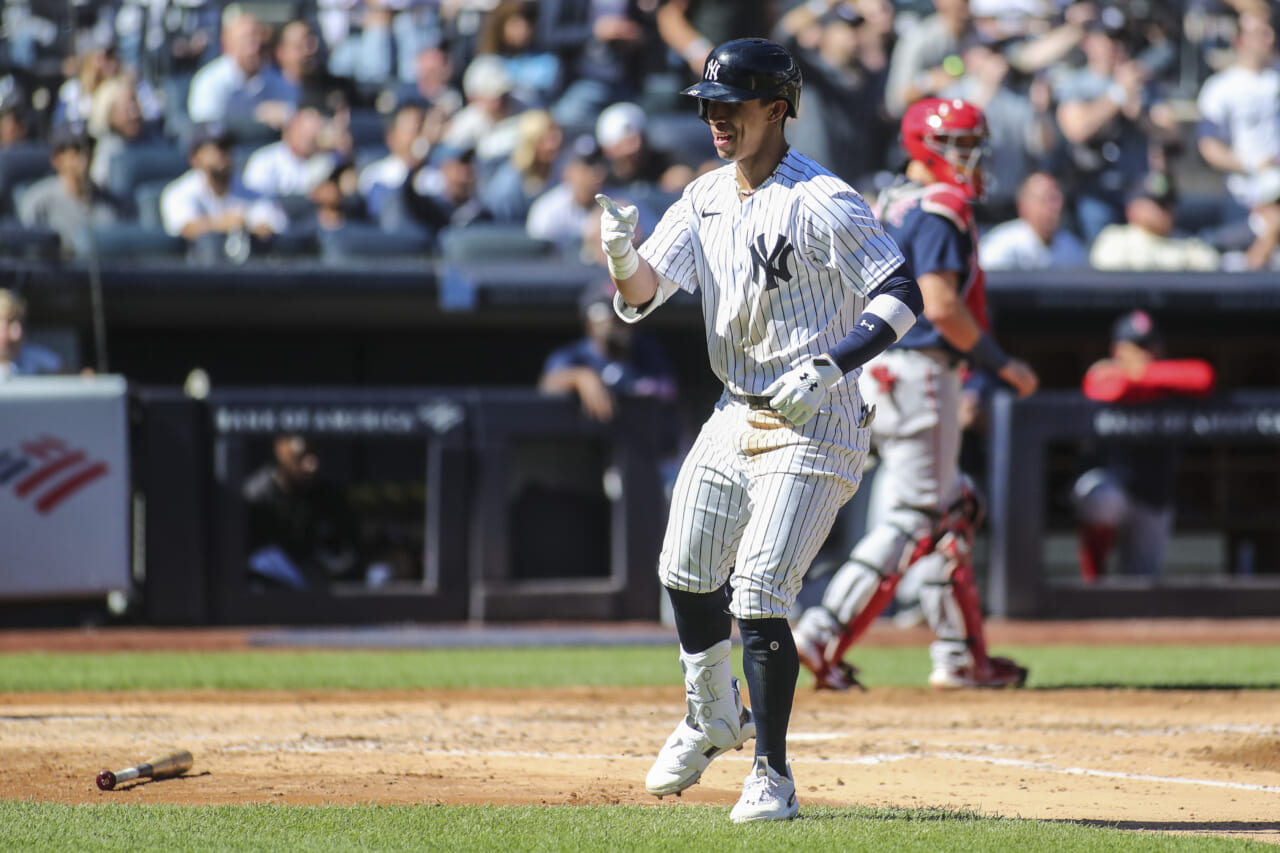 Posted: January 28, 2023
The Yankees continue to bring about confidence and competition with their positions of need, as Brian Cashman stated that left... [...] 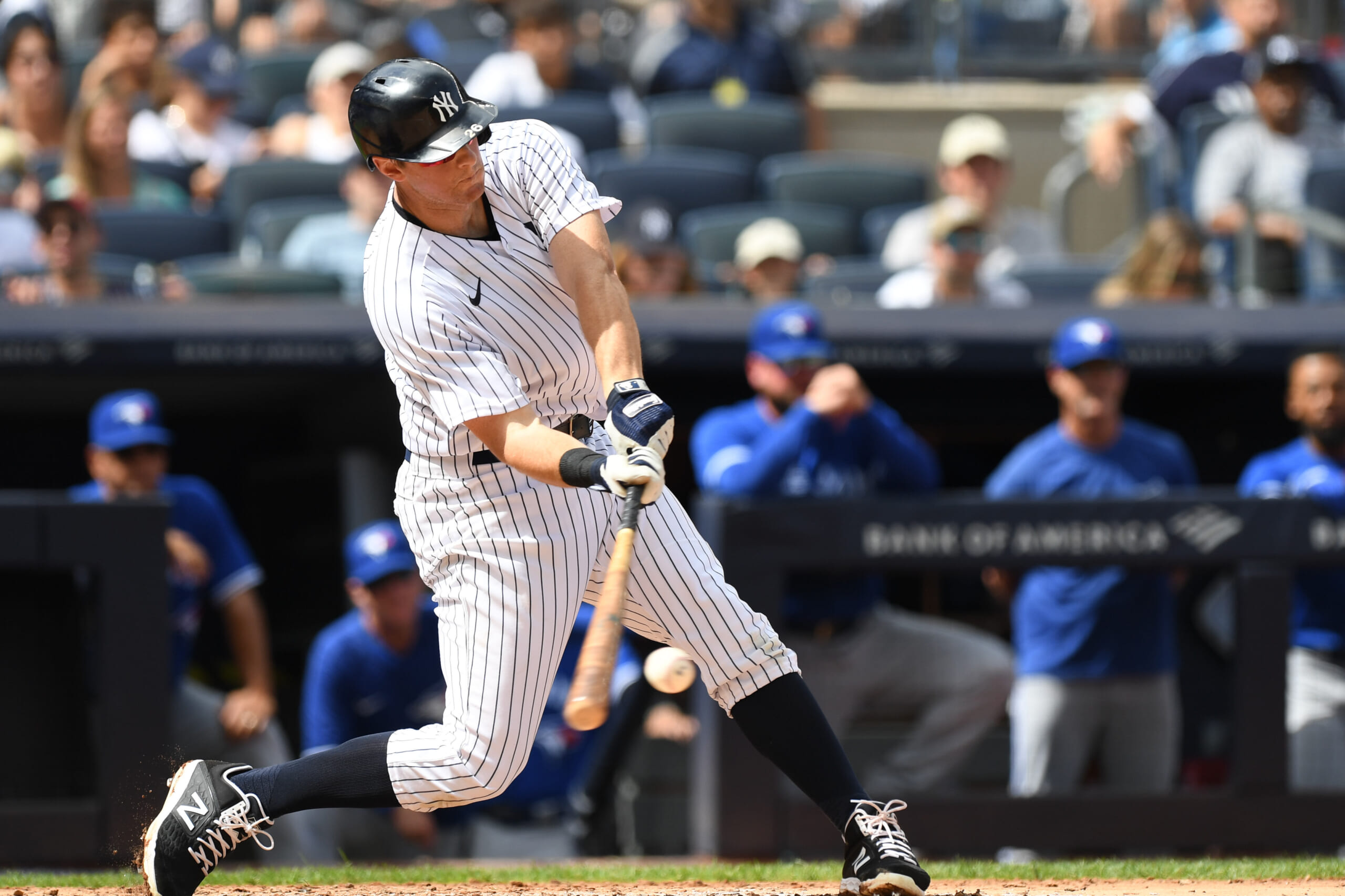 Posted: January 28, 2023
The Yankees without DJ LeMahieu aren’t just worse, they are noticeably inept in some respects. Specifically, LeMahieu offers the team... [...] 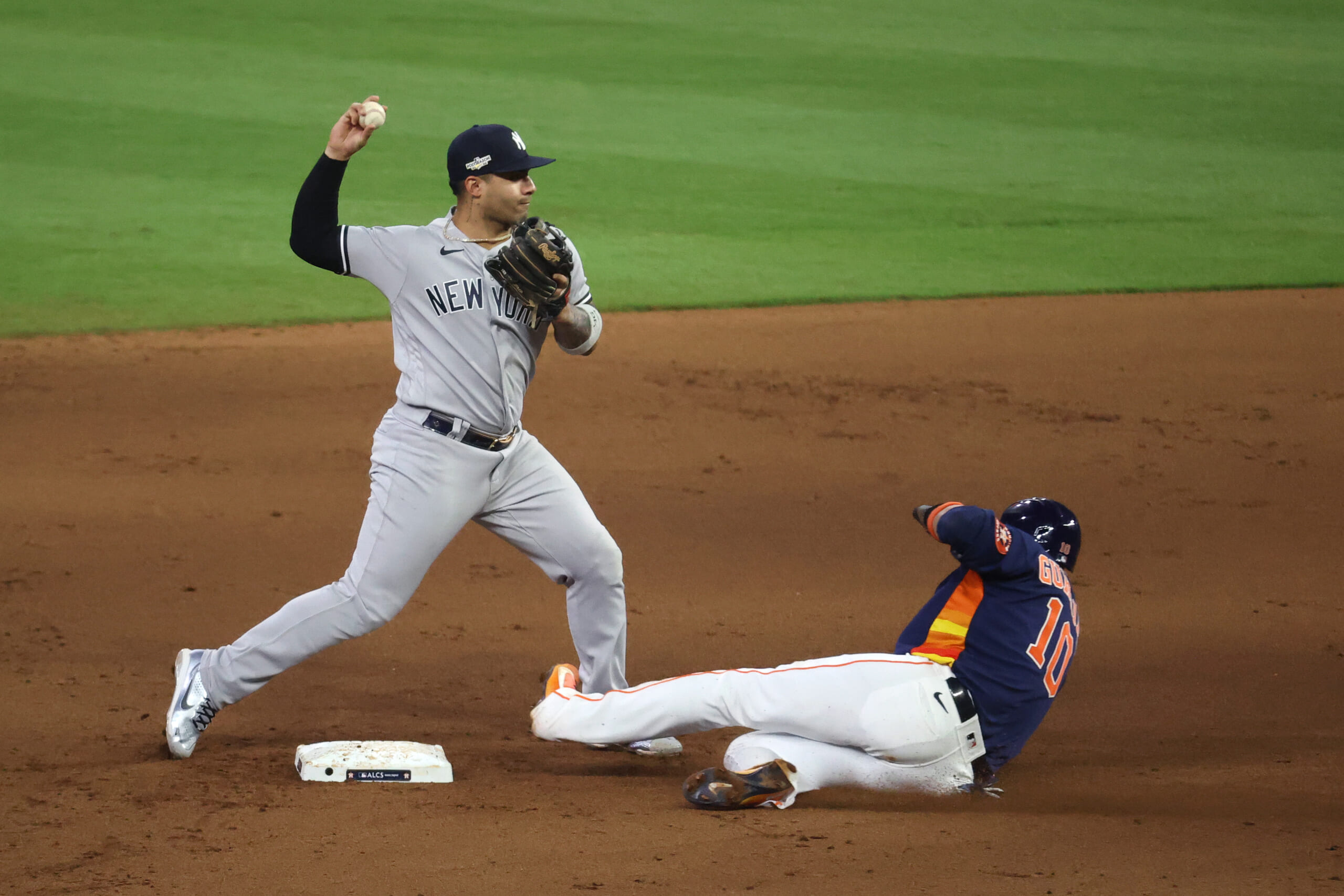 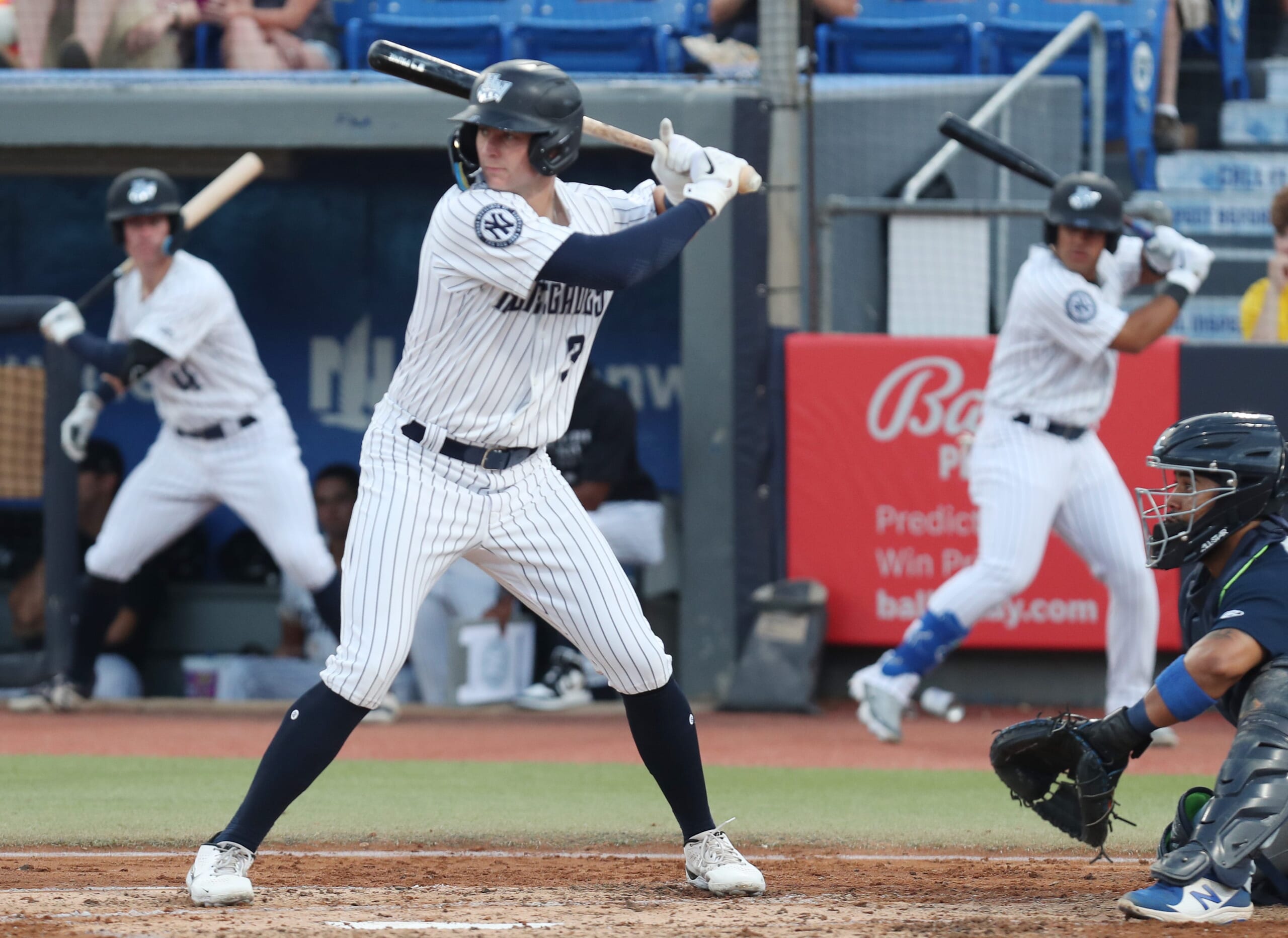 The Yankees have 3 prospects set to break out in 2023

Posted: January 27, 2023
When evaluating the Yankees‘ farm system, it’s apparent that they have an abundance of talent. They possess plenty of high-octane... [...] 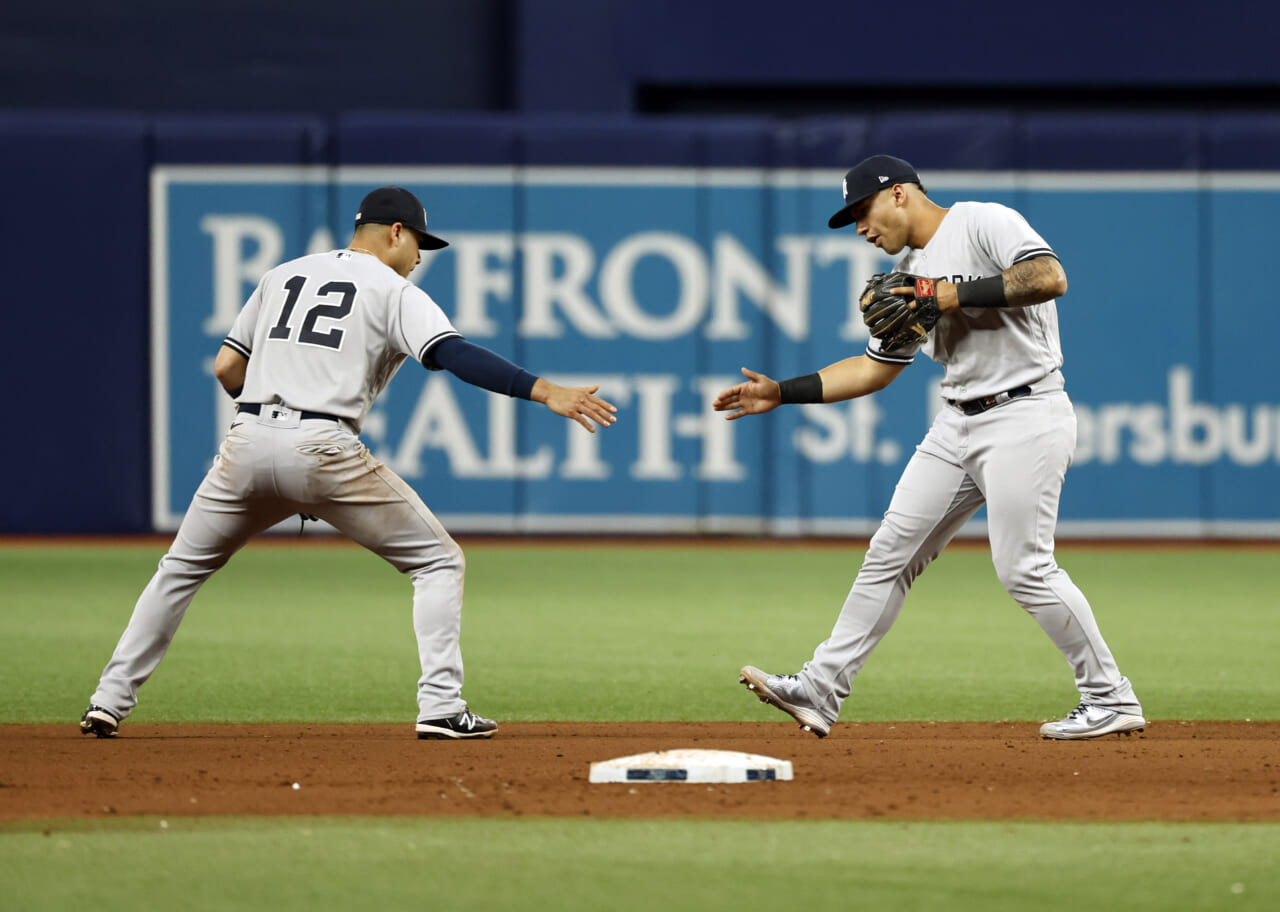 Posted: January 27, 2023
One way or another, the New York Yankees will feature one of their young prospects at shortstop within the next... [...] 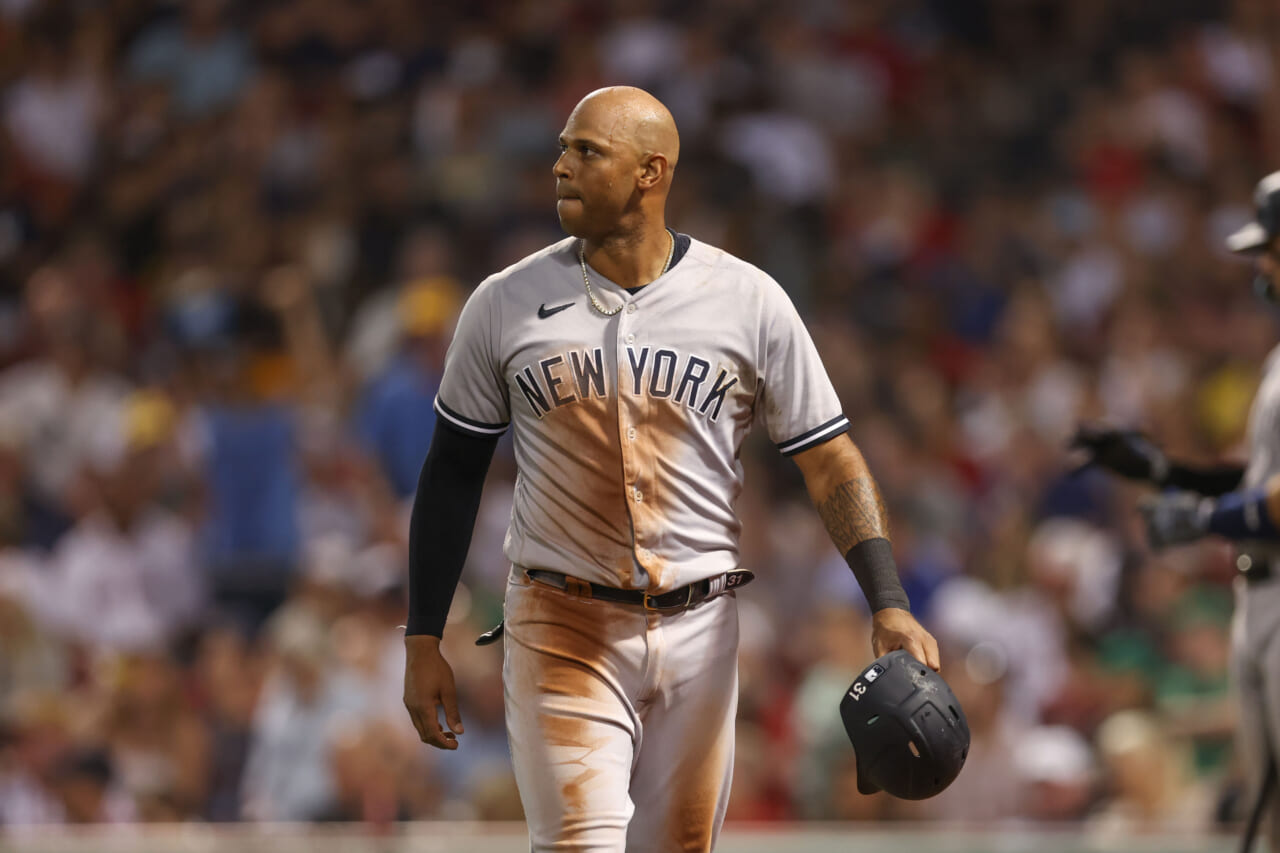 Are the Yankees pulling a Bubba Crosby with Aaron Hicks?

Posted: January 27, 2023
Since the beginning of the offseason, the Yankees have had three main priorities. The first priority was re-signing Aaron Judge.... [...] 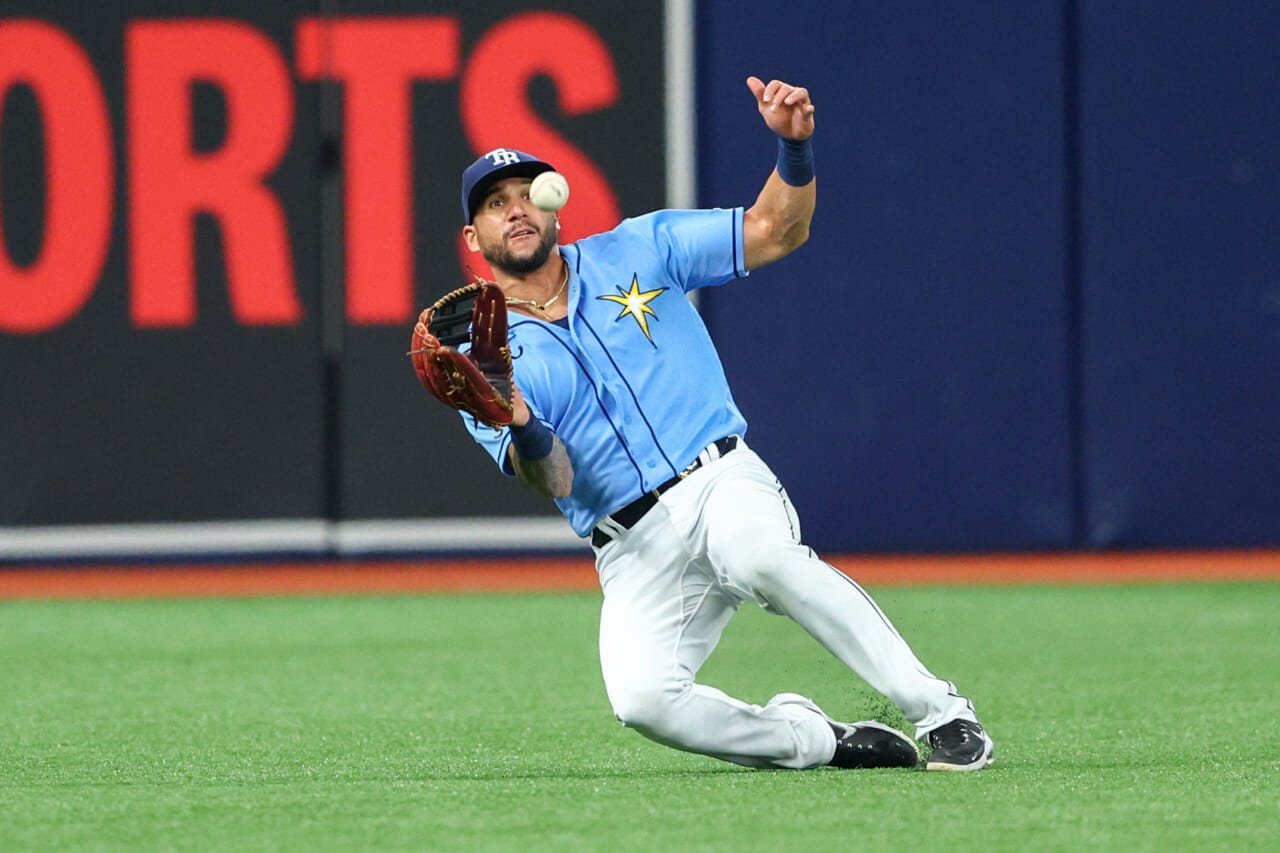 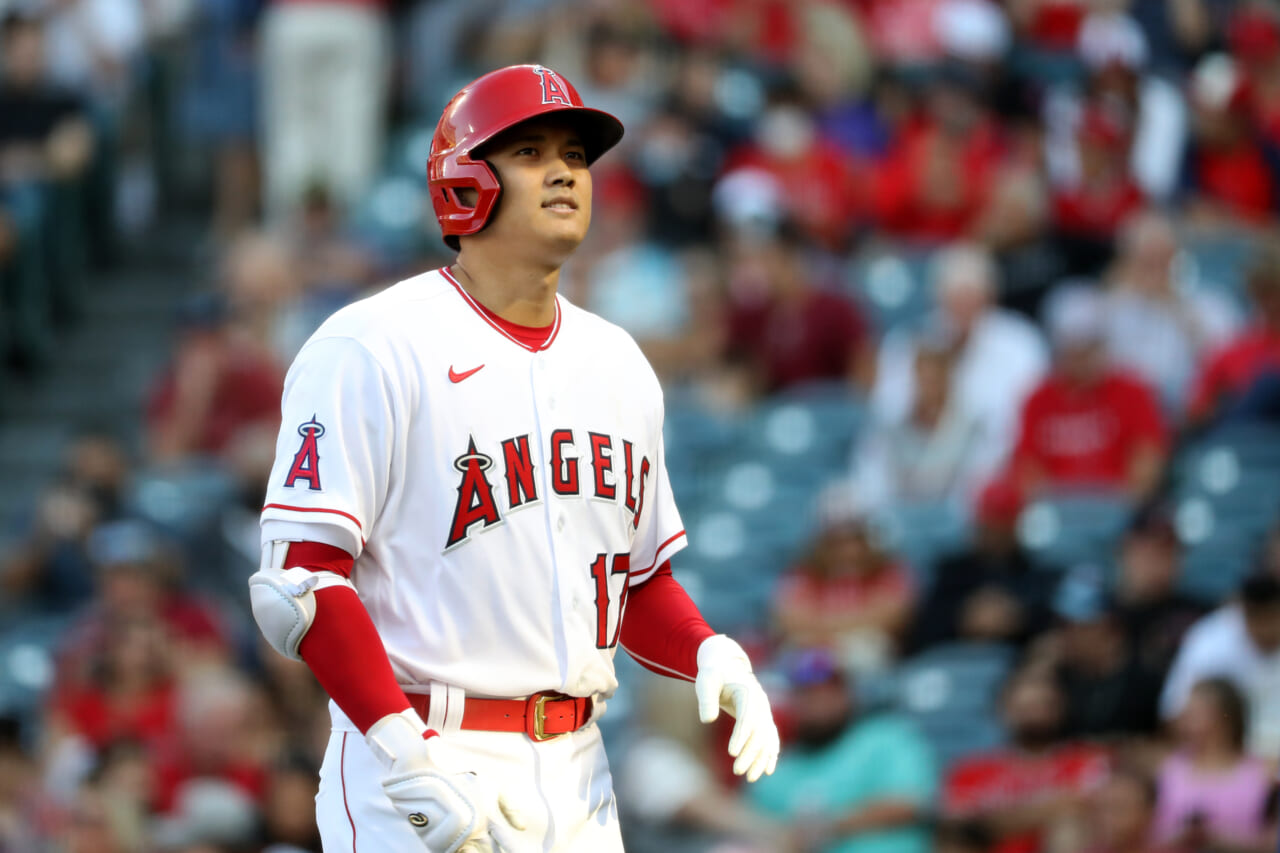 Josh Donaldson’s check needs to bounce, or maybe it’s him that should bounce:

The only reason this is a problem is because Cashman and the organization actively went out and acquired him, as well as IKF — who is no picnic to watch play, either — and agreed to take on Donaldson’s entire contract. That meant that JD was to be paid $23 million last season, and this year he’s set to take home another $21 million.

The Yanks basically said no to any of the big-name SS that have been on the market the past two off-seasons, partially due to the fact that they have so much money allocated to JD. The biggest gripe I take away from the transaction itself is that if the Yankees really wanted to part ways with Gary Sanchez that badly, why not just have DFA’d him and held onto Gio? Urshela, now an Angel, was objectively better than Donaldson last season.

Donaldson making as much money as he is makes it very difficult to offload him, and unlike Uncle Steve in Queens, Cashman and co don’t seem anxious to cut their losses and trim the fat. Though Donaldson was making far more money than he should’ve been, he was fortunately still very reliable on the defensive side. He posted 7 DRS and 7 OAA, both bests since his 2019 resurgence of a year with the Braves. He was slick, smooth, and able to cover exceptional amounts of ground at third base, despite being the least athletic guy out there.

However, despite the defensive stalwart that he is, it doesn’t make up for robbing the organization of nearly $50 million for two years’ worth. Even with him being one of the best defensive third baseman in the league, he still posted just a 1.6 fWAR over 132 games.

For reference, 1.0 WAR is worth roughly $8 million, according to Fangraphs, so JD should’ve been getting paid roughly $12 million or so last season for his efforts, yet he made double that. He was paid $23 million to swing and miss at a career-worst clip and watch pitches down the middle more than he ever had.

For the first time since 2010, when he made his debut, he posted negative runs according to BaseballSavant’s Swing/Take Runs. He posted -2 across the board this year and paired that with career-worst in Meatball Swing % (which means he didn’t swing at gimme pitches) at 78.1% and 1st Pitch Swing % at 36.3%. He simply didn’t wait for his pitches, was far more aggressive than he needed to be at the plate, and didn’t jump on the mistakes.

Donaldson ranked in the bottom 8% of the entire league for Whiff Rate this season, and he posted the second-lowest Hard Hit % since 2015, at just 43.2% — which was down from 53% the two years prior. Simply put, he was just putrid with the bat in his hands.

If he’s on the Yankees’ roster in ’23, maybe there’s still something left in the tank:

The one main saving grace to his atrocious 2022 campaign is that it can’t possibly get any worse than that, right? The biggest thing with Donaldson is that there are clearly tools there that make up a fantastic hitter, and that was evident for a few years there when he was toe-to-toe with Mike Trout for the most valuable player in baseball.

The other intriguing thing is that in Donaldson’s career, for the past four years, he’s gone off and on with his Barrel % and that usually correlates with his performance. What I mean by that is in ’18, he barreled up only 8.2% of balls, and in ’19, it was up to 15.2%. Then, in the shortened 2020 year, it went back down to 6.9% before skyrocketing up to 17.4% the following season. This year, he only barreled up 9.8% of balls hit in play, and if the recent trajectory shows anything, next year should see a large spike, in theory at least.

Though, the most likely situation for Donaldson does look to be a platoon at 3B and getting occasional DH days when, and if, Stanton is deployed in the outfield. He can still make a difference on this team if some things go his way and if he reverts back to what made him so successful in the past.

Donaldson has always been a guy that is very passionate about his craft and is constantly in the lab trying to work out the kinks in his swing and approach. This last season was a career-worst for him, and if he wants to have any chance at saving face with the fans of this franchise, he needs to rebound in a big way. Nobody knows exactly what Boone and co. are thinking when it comes to what the OD lineup will be a few months from now, but if JD is still in Pinstripes, he has to do more than he did last year.

There’s simply no way the team can continue to throw him out there and have him bat anywhere in the middle of the lineup; I don’t care what his pedigree indicates.

Sadly, Father Time always gets the best of us in the end, and the light may be dwindling on his career. If he wants any shot at continuing to play baseball at a high level, he has to make changes. He cannot watch hittable pitches down the middle of the plate and then proceed to swing at a slider down and away. Last year, JD saw an astonishing 502 pitches low and away, out of the strike zone, and he chased those pitches at an astronomically high rate. If he wants to turn back the clock for one last hoorah, he has to be more disciplined.

For a guy who walked at least 10% of the time every single year since 2013, the sub-10% clip he posted last season (even just barely at 9.9%) should spark a fire inside of him. Pair that with the worst K% of the 2010s and 2020s for his fantastic career at 27.1%, and there has to be some motivation to improve. I know not everyone is a fan of the Bringer of Rain, but that’s because he brought us nothing but pain 90% of the time last year. If he is able to flip the script and post-JD-esque numbers as he did in years past, then perhaps he’ll have a big role on this team after all.