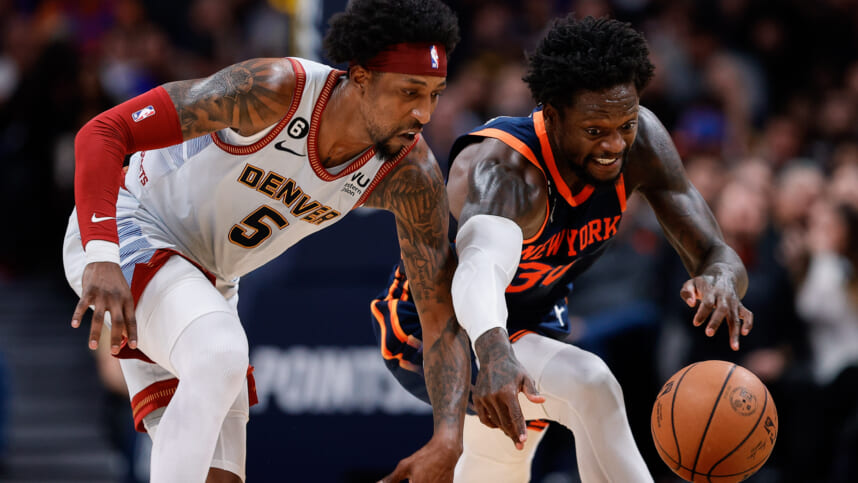 New York Knicks maligned forward Julius Randle was under the weather. But that did not stop him from being a leader.

On the back end of the most brutal back-to-back road schedule in the NBA, the Knicks have all the reasons to quit after they trailed by 10 in the fourth quarter.

Randle put forth a monster effort on both ends of the court. And his burst of energy, never before seen in a long time, inspired the Knicks to an unlikely sweep of the high-altitude games in Utah and Denver and their first win against the Nuggets — a thrilling 106-103 escape Wednesday night — in over 16 years.

Randle was too hot to handle with a season-high 34 points, 11 rebounds, four assists, and four steals, with three in the fourth quarter that fueled the stunning comeback.

For a while, the Knicks’ long drought in the Mile High City was seemingly on its way to getting extended when Bones Hyland drilled a wide-open 3 for a 96-86 spread with 8:44 remaining.

Randle picked Zeke Nnaji’s pocket, leading to an Obi Toppin 3, which he missed. Randle hustled again for the offensive rebound, and his putback triggered a 17-2 Knicks run to zoom ahead, 103-98, entering the final two minutes.

Randle’s imprint was all over — from scoring and assisting on the offensive end to hustling and diving for loose balls on the other end.

Hyland responded with a five-point blitz to tie the game for the last time. But Randle refused to let this one slip away.

The Knicks forward boxed out Jeff Green, drawing his fifth foul. Randle split the free throws to put the Knicks ahead while their resurgent defense took care of the rest.

Reserve center Jericho Sims, fresh off the bench, smothered Jamal Murray on the switch. Immanuel Quickley also did the same to Murray, forcing an airball at the buzzer, with Randle grabbing the rebound and letting out a passionate howl.

Those two defensive gems sandwiched the clutch free throws from Jalen Brunson, whose composure continued to stabilize the Knicks down the stretch.

Brunson added 21 points, five rebounds and seven assists. He and Randle had eight points apiece in the pivotal fourth quarter.

But Brunson gave Randle the spotlight he rightfully deserved for this important win in mid-November that could go down as a defining moment of their season.

It was a galvanizing last 48 hours for the Knicks, who left New York on the brink of a major shakeup after an embarrassing loss to the Oklahoma City Thunder on Sunday.

“Togetherness. Just sticking together. When I was asked [about this daunting road trip], I said it’s going to be a great trip for us to spend time as a team, bond, and get close. It’s showing up on the court. We have to keep it.”

They locked in after a Randle-organized Monday dinner in Salt Lake City that reminded them of holding each other accountable, coupled with Thibodeau’s tough decision to shorten the rotation, which made them a cohesive unit on the floor.

Now they have won two in a row against winning teams, dealing Utah and Denver their first home loss of the season.

“We knew it would be a challenge coming in with the back-to-back schedule. The way Julius started the game gave us confidence that we’re gonna play well and then the way he finished it — his hustle, his defense — it was unbelievable.”

Without Nikola Jokic (health and safety protocols) and Aaron Gordon (non-COVID illness) to contend with, Randle started the game on fire. He waxed hot with 24 first-half points on 7 of 12 shooting.

The Knicks survived another poor shooting (4 of 18, 0-9 from 3) from the under-the-weather RJ Barrett. Quickley, who’s grown into a solid defender, closed out the game with Barrett on the bench.

Cam Reddish had his third straight double-digit scoring with 10 points. His defense (two steals and one block) has steadily improved as he’s firmly entrenched in the starting unit, with Evan Fournier and Quentin Grimes logging DNPs anew.

Putting their long wingspan to good use, Reddish (plus-13) and Quickley (plus-11) have become the Knicks’ best perimeter defenders.

Veteran Derrick Rose, who said he was in “the unknown” just a week ago, had re-emerged with a season-high-tying 13 points in 17 minutes off the bench.

But at the heart of this Knicks’ resurgence is Randle, who refused to quit and finally walked the talk.