Knicks cool off after hot start in dispiriting loss to Thunder 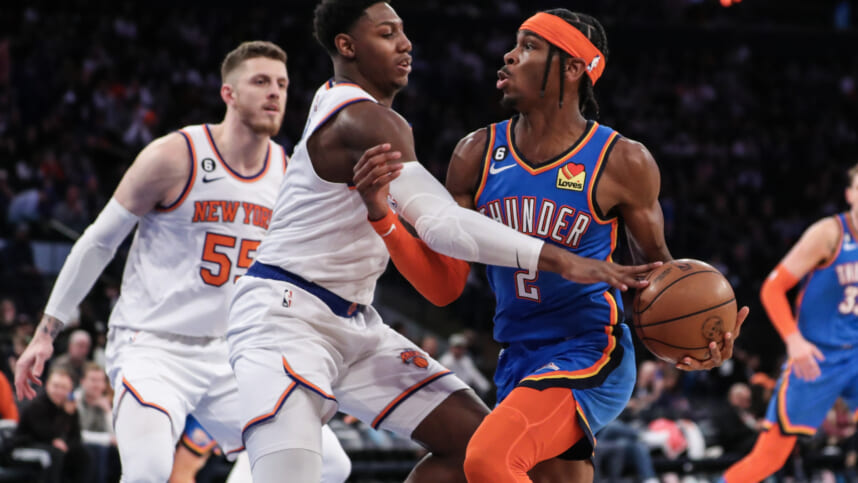 The New York Knicks sputtered with another listless defensive effort in a head-scratching 145-135 loss to the tanking Oklahoma City Thunder Sunday at Madison Square Garden.

After building a 12-point lead on the strength of a franchise-record 48 points in the opening quarter, the Knicks suffered a humiliating meltdown that earned them boos from a sold-out 19,812 Garden crowd.

The Thunder entered the game as the second-worst three-point shooting team. They exited looking like the league’s best, hitting 17 of 31 3s, in another example of the Knicks’ futility in guarding the perimeter.

The 145 points they gave up were the most a Knicks opponent has scored during Thibodeau’s reign. They have given up at least 120 points four times in their first 13 games, uncharacteristic for a Thibodeau-coached team.

Alexander was the better Canadian on the floor on Sunday, dominating RJ Barrett, who was benched for the rest of the game after picking up his fourth foul early in the third quarter.

The 24-year-old Alexander, one of the gems that got away from the Knicks in the draft, delivered a complete two-way performance with a game-high 37 points, five rebounds, eight assists, three steals and two blocks to lead the Thunder’s stunning comeback.

Barrett was a flop after his 30-point game last Friday. He was held to a season-low four points on 2 of 10 shooting in under 20 minutes of play.

“We just got behind by so much that we were just looking for life. The group that was in there gave us a little bit of a spark, so that’s where we went with it.”

Tom Thibodeau (on benching RJ Barrett in the final 21 minutes) via NBA.com

Josh Giddey added a triple-double (24 points, 12 assists and 10 rebounds) for the Thunder, who won for the fifth straight time at the Garden.

Giddey made history as the only other player aside from Wilt Chamberlain (1968) to have triple-doubles in their first two games at the most famous arena.

Cam Reddish paced the Knicks with a season-high 26 points as Thibodeau desperately searched for the right combination to counter the Alexander-Giddey Thunder combo. Save for Reddish, the rest of the Knicks’ starting lineup had a double-digit negative plus-minus.

It was a bitter pill to swallow for the Knicks, who went under .500 again with a 6-7 record as they head to a brutal five-game West Coast trip.