RJ Barrett’s 30 pts fuel Knicks win over Pistons: ‘He can lead a franchise’ 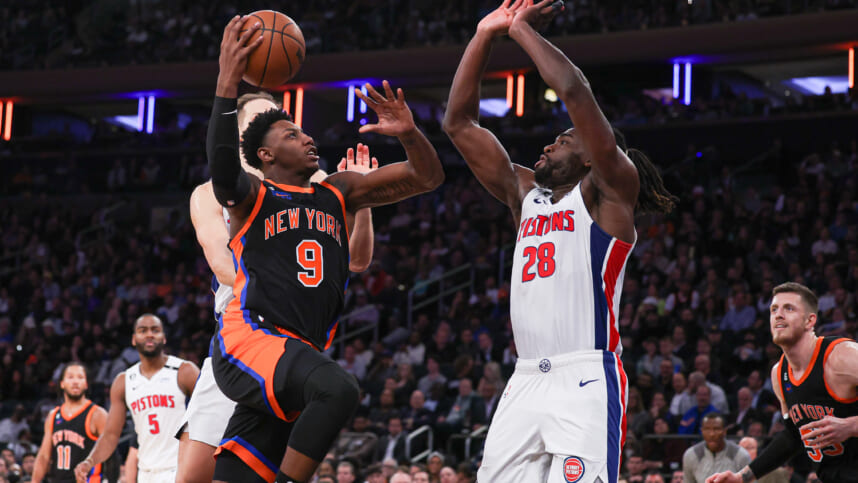 On Friday morning, Donovan Mitchell’s bombshell — “RJ Barrett and hella [draft] picks” was what the Utah Jazz asked from the New York Knicks for him — made the rounds.

Later in the night, Barrett responded with his best game of the season leading the Knicks to a 121-112 win over the Detroit Pistons at home.

The nixed Mitchell deal cast a dark cloud over the Knicks’ rough start to the season as their six defeats came at the hands of the superstar-laden teams.

Barrett showed signs he could become one in a 30-point gem. Although his season-high scoring came against the lowly Pistons, missing their top player Cade Cunningham, it did not keep his teammate Jalen Brunson from making a bold prediction.

“I think [Barrett] can be an All-Star. I think he’d be a very impactful player. I think he can lead a franchise and that’s what he was picked to do here, and he can do it. And I have the utmost faith in him.

The 22-year-old Barrett scored 20 in the first half. Then he punctuated his big game with two clutch free throws and set up Immanuel Quickley’s dagger to seal their bounce-back win from an embarrassing loss in Brooklyn two nights earlier.

Barrett was aggressive from the get-go, hunting for his shots. He had 12 points in the opening quarter, which set the tone for the win where the Knicks led by as many as 17.

After a slow start, Barrett is trending upwards.

“In my three years here, [Barrett] started pretty much the same way. It’s a steady climb for him. I think if you looked at his numbers over the last five games, you can see he’s shooting the ball well now. When he’s shooting the ball, that really sets up his first step and I think the more aggressive he is going to the rim, I think he’s gonna get to the line a lot more.”

Barrett was due for a big game, and the Mitchell bombshell may have fueled him even more.

Brunson pitched in 26 points and seven assists without a turnover while Julius Randle also showed up with 21 points, eight rebounds and five dimes.

Former Knick Alec Burks made his season debut with 17 points off the bench for the Pistons, who cut the Knicks’ lead down to four with 1:20 remaining.

Then Barrett took over.