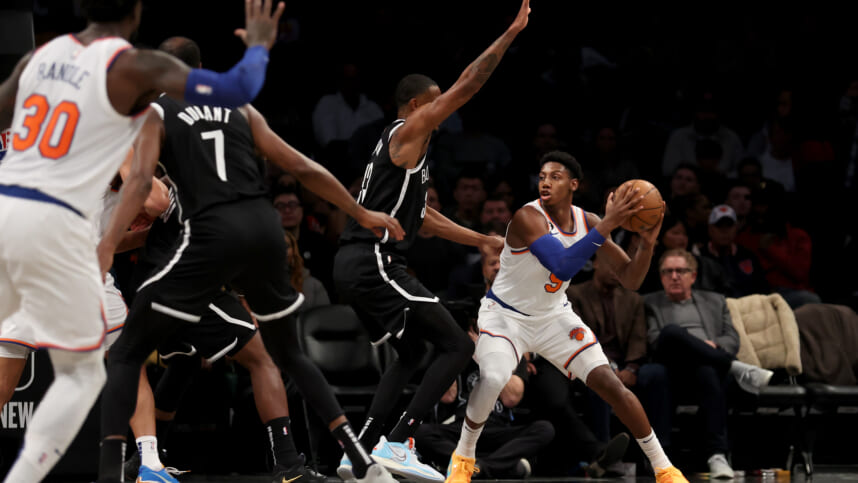 The New York Knicks may have the larger fan base, but the Brooklyn Nets remained to have their numbers.

Two nights after shooting the lights out in Minnesota, the Knicks were held to a season-low 32.2 percent shooting in the face of the Nets’ hyperactive zone defense.

Julius Randle had a back-and-forth against Durant but failed to negate the Nets’ superstar.

Randle was the only Knick who brought his A-game, finishing with 24 points, 11 rebounds and three assists. But Durant was just on another level, casually dropping 29 points, 12 rebounds, 12 assists and two shot blocks.

Unlike Randle, Durant mustered plenty of support with Seth Curry breaking out on his fourth game since his return from ankle surgery with a season-high 23 points anchored by six triples.

Edmond Sumner was as hot as summer early in the game, drilling in three 3s in the opening quarter as the Nets seized opened up a 38-22 lead. The Knicks were never in the game and trailed by as many as 35.

It was not just a case of a coaching bump for the Nets, who named Jacque Vaughn as Steve Nash’s permanent replacement before the game.

The Nets have become a defensive juggernaut since Vaughn took over from Nash five games ago. The Knicks became the fourth team the Nets have held to under 100 points — and the second team to score under 90 — over that span.

It didn’t help that the Knicks’ perimeter defense — their biggest weakness — got exploited by Durant, who was a willing passer off the double team.

The Knicks trailed by 25 at the half with RJ Barrett shooting only 1 of 6 and Jalen Brunson going 2 for 7 from the field. The Nets matched the largest halftime lead in their rivalry, returning the favor to the Knicks, who held that distinction before the game when a Carmelo Anthony-led Nets sat on the same cushion at the break on April 2, 2014.

The loss was the Knicks’ fifth in a rough seven-game stretch against star-laden teams.

Kyrie Irving remained suspended, but Durant and the Nets did not need the controversial star guard to find holes in the Knicks’ defense.

Quentin Grimes returned, but Cam Reddish remained the starter. It was a rough night for Reddish, who couldn’t stop Durant and laid a big fat egg on the offensive end.

Brunson’s four-game streak of having at least 20 points and five assists ended in Brooklyn. He only managed 14 points and two assists as he shot a season-low 28.6 percent from the field.

The Knicks will have an opportunity to bounce back on Friday against the lowly Detroit Pistons, who they routed by 24 last month.