Julius Randle, Knicks rain 3s in Minnesota to even record 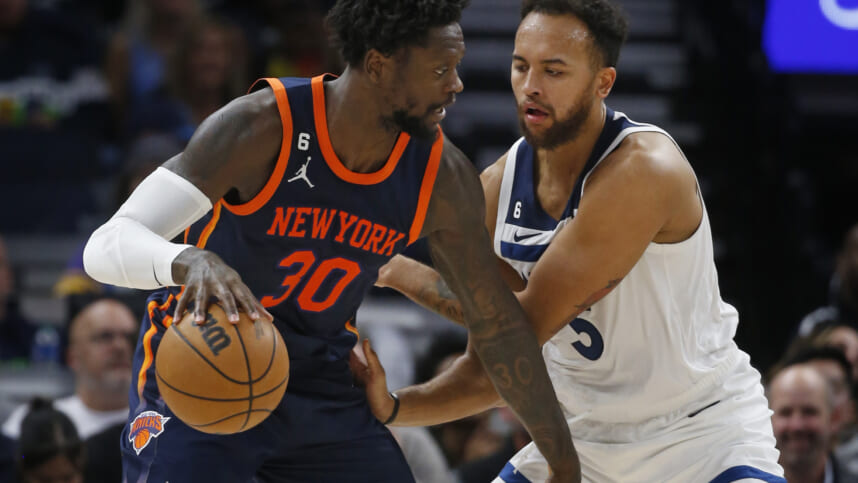 The New York Knicks and the Minnesota Timberwolves entered late Monday night’s matchup as the no.1 and no. 2 in most 3-pointers made and attempts allowed this season.

It was the second-worst perimeter defense that caved in.

Julius Randle hit half of the Knicks’ record 10 3s in the opening quarter as the Knicks blitzed to a 120-107 win over the Rudy Gobert-less Timberwolves on the road to even their record at 5-5.

The Knicks made 19 3s on 48 attempts, both season highs. The Timberwolves were never in the game though they cut a 27-point Knicks lead down to 13 in the fourth quarter.

But Randle and Jalen Brunson responded with consecutive hits from the outside to extend the lead to 19 that put the game beyond reach.

Brunson continued his strong start with 23 points on an ultra-efficient 9 of 14 shooting night and eight assists against three turnovers.

Toppin proved his much-improved 3-point stroke is not a fluke. It marked the fourth time in 10 games that he’s made at least three 3-pointers. He finished with 15 points, seven rebounds, three assists and a game-high four steals in a season-high 26 minutes.

RJ Barrett also hit three 3s as he waxed hot early, going 7 for 11 on the floor before he missed his last six shots. He settled with 22 points, five rebounds and five assists.

The Knicks’ hot outside shooting pummeled the Timberwolves’ listless defense.

“We just play soft, man. Like, every bump, we’re flying all over the place, including myself. Teams just coming in like, ‘We’re going to take their heart,’ and that’s what’s going on. We’re down 20 every game! We’ve got to figure it out.”

Up next for the Knicks is the Battle of New York on Wednesday in Brooklyn against across-the-borough rival Nets.

Thibodeau said postgame that he hasn’t paid much attention to the Nets’ drama. He already has more than on his plate right now following the Knicks’ roller-coaster start.

“I worry about the Knicks. That’s more than enough for me.”

Sims contributed four points, four rebounds, and a block in a foul-plagued 16 minutes against Towns.

Cam Reddish started for the second straight game, finishing with eight points and nothing else, but his length and defensive presence went beyond the box scores.