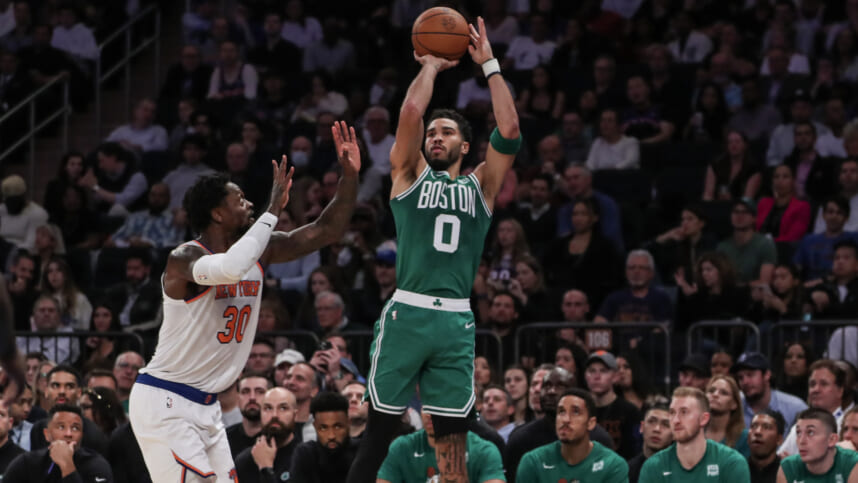 Despite Tom Thibodeau’s efforts to adapt to the NBA’s 3-point revolution, this version of the New York Knicks isn’t cut for it.

Saturday night’s 133-118 loss to the shorthanded Boston Celtics was the latest and perhaps biggest proof. The Celtics hit 27 3s on 51 attempts, a stunning 52.9 percent accuracy. It wasn’t just a blip. It’s becoming a concerning trend.

Entering the Celtics game, the Knicks were already giving up 13.4 3s on a league-most 41 attempts.

A bull’s eye target on the Knicks players’ chests instead of the New York logo is what the Celtics saw at the Garden. The Knicks’ woeful perimeter defense even made Sam Hauser look like an All-Star gunner. Hauser may have made a reputation in college as a 3-point specialist but allowing him to go 6 for 9 is unacceptable for an NBA team with playoffs aspirations.

“We gotta talk. We gotta communicate better. Most [of our] problems stem from that lack of communication. The intent was there. Everything is there. We just gotta talk it out and be on the same page.”

Through their first nine games, the Knicks have allowed a league-most 14.9 3s on 42.1 attempts per game. That’s equivalent to 45 points. In contrast, they could only cough up for only 11 3s per game, ranked 22nd among 30 NBA teams. That’s already a 12-point differential.

All the teams the Knicks have beaten so far, except for the Philadelphia 76ers, belong to the bottom 13 3-point shooting teams in the league, averaging 11.7 or fewer 3s. And they barely beat the shorthanded 76ers, who were missing their top two players — Joel Embiid and James Harden — who combine for at least three 3s per game.

On the other end of the floor, no Knicks player is averaging 1.9 3s per game — a no-no in the modern NBA. What’s worse is that their three-point leader, Evan Fournier, is their biggest liability on defense.

The Knicks have depth. But the quality of that depth is mediocre at best. They lack consistent shooters and strong perimeter defenders — two key ingredients of successful teams in today’s NBA.

Thibodeau can only do so much coaching this team, squeezing every ounce of effort from his players. But the reality is the gap between the Knicks from contention remains as wide as the distance between the rim and the three-point zone.