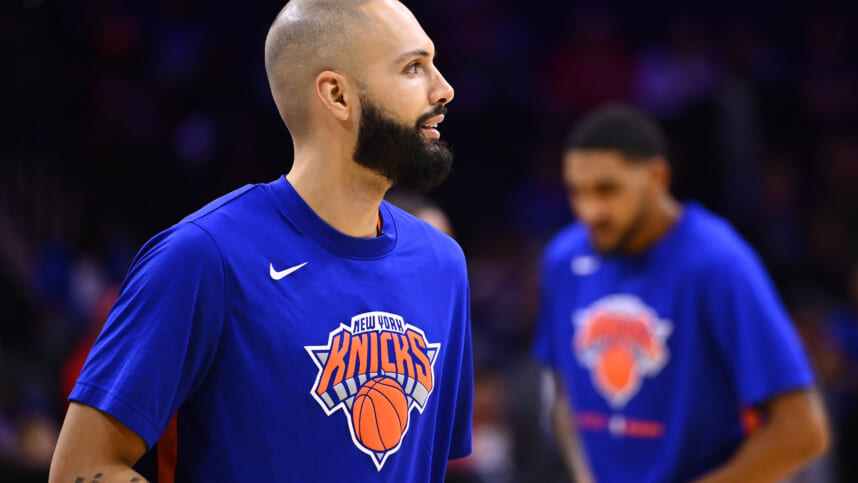 Following the New York Knicks‘ embarrassing loss to the Oklahoma City Thunder, veteran guard Evan Fournier talked about how hard to find his rhythm coming off the bench.

But after the Knicks’ bounce-back win in Salt Lake City, it appears Fournier might have to find his rhythm elsewhere.

Fournier and the still-reconditioning Quentin Grimes were cut from the rotation Tuesday night as the Knicks bounced back with a 118-111 win over the Utah Jazz to open their five-game West Coast trip.

A shorter rotation made the Knicks look more cohesive on both ends of the floor.

“The togetherness — trying to help each other out — great will, determination, and unselfishness. So [it’s] a good road win for us. I thought we were tied together.”

Thibodeau’s latest lineup shakeup is an admission of the epic failure of the Knicks front office’s 2021 summer moves.

Fournier is expected to follow Kemba Walker’s fate as his recent benching signals his days are numbered in New York. Both were brought in to address the Knicks’ lack of firepower in their playoff loss to Atlanta. But the defensive drop was too much for Thibodeau to cover up.

Grimes’ situation isn’t as dire as Fournier’s, as the 22-year-old 3-and-D wing was deemed untouchable in the failed Donovan Mitchell trade. He’s considered situational as he works on his conditioning following a lingering foot injury that kept him from competing for a starting spot in the training camp.

“We wanted to see what it would look like. And it gave us, I thought, better rhythm. That’s why we did it.”

Tom Thibodeau on 9-man rotation I Knicks-Jazz postgame via NBA.com

Fournier now becomes a distressed asset with $33.8 million guaranteed money still owed him until next season. The Knicks might have to attach a draft asset to unload him as they did with Walker.

But the ability to pivot quickly from miscalculations will help the Knicks get out of the mediocrity trap.

Thibodeau’s latest decision gave guys like Cam Reddish — who continues to flourish as a starter with 19 points — and the duo of Immanuel Quickley and Obi Toppin — who sparked the Knicks’ early fourth-quarter breakaway — with defined roles.

And the result speaks for itself.

“I thought that group played really well and so there was good activity with it. There are stretches where you’d have Derrick (Rose), Quick and Cam and then it’s Derrick, Quick and RJ. And then I thought Obi really played well, like really well. And so I loved the production that we got from Jericho (Sims), Obi and Quick, off the bench and Derrick as well. And I thought they brought the best out of everyone. And then having RJ with them, I think helped us as well.”

Rose had six points and three assists in 13 minutes off the bench, while Sims churned out his second career double-double with 11 points and 13 rebounds. They were part of the Knicks’ second unit that neutralized one of the Jazz’s strengths — bench production — with 39 points.

“Just the rhythm of it, you know, it’s sort of like you’re learning your team, what works best. Are our guys able to get in a rhythm? Those are the questions you ask and so that’s why we did it.”

Thibodeau is done accommodating the front office’s additions that didn’t pan out.

How can the Knicks integrate Grimes back into the rotation?

Will they ship both Fournier and Rose and genuinely move forward with the youth movement?