What If The New York Giants Do Not Acquire A Quarterback In The 2019 Offseason? 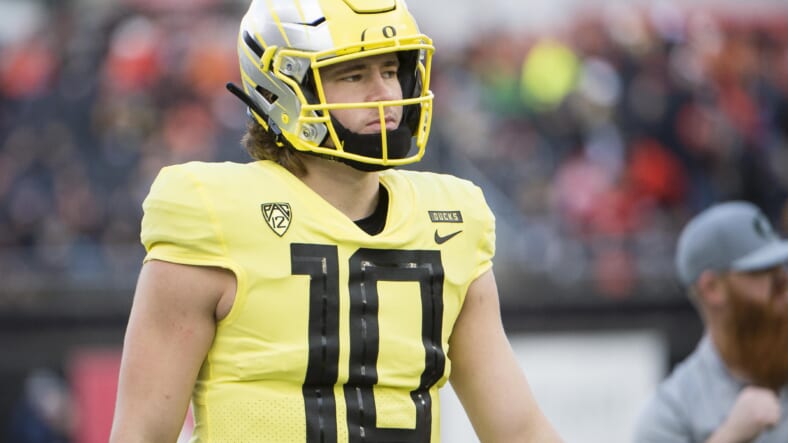 The 2019 offseason has been an interesting one for the New York Giants. So far they have traded away their star receiver in an attempt to rebuild the offense. However, they also decided to keep 38-year-old Eli Manning as their starting quarterback. This has left fans and analysts confused as to what direction the team is going.

General manager Dave Gettleman claims to have a plan. Not many people see a clear and concise plan being executed at this moment in time. One thing seemingly everyone (except Gettleman, for some reason) can agree on is that the Giants need to find a quarterback in the 2019 offseason.

How This Would Affect The 2019 NFL Draft

Fans and analysts are expecting the Giants to take a quarterback with the 6th overall pick in the 2019 NFL Draft, or at least some point in this draft. However, if they do not draft a quarterback, the Giants will be able to address a lot of other positions of need.

The 2019 NFL Draft class is loaded with defensive talent. With the 6th pick in the draft, the Giants could potentially take a defensive superstar. Teams might trade up ahead of the Giants to select a quarterback. This would cause the elite defenders to fall right into the Giants’ lap.

If the Giants have the opportunity to draft Quinnen Williams, Devin White, Josh Allen, or Nick Bosa, they need to do it (if they are choosing to wait on a quarterback). If any of those defenders are available, the Giants cannot waste their pick on an offensive lineman or any other position. Those players are elite prospects who have all-pro potential.

The Giants had one of the worst defenses in the NFL in 2018. Any of those players would be able to step in and make an immediate impact.

The Giants Could Make A Run At An NFL Veteran

The 2020 offseason is set to be filled with quarterback talent. In the NFL, a few veteran signal-callers are set to become free agents in 2020, barring any mid-season contract extensions. One name to pay extra attention to is Russell Wilson.

Russell Wilson has spent 7 seasons with the Seattle Seahawks. He has won a Super Bowl and thrown for at least 30 touchdowns in 3 of his 7 seasons. He has never had a season with less than 20 touchdown passes. Wilson is an elite quarterback. His next contract, whether it is with Seattle, New York, or another team, will likely make him the highest-paid player in NFL history.

Wilson has not ruled out the possibility of playing in New York. He was rumored in February to have interest in joining the Giants. However, when asked about it, Russell Wilson admitted he does not think Seattle will let him go. If he manages to become a free agent, expect the Giants to make a serious run at the future hall-of-fame quarterback.

Quarterback Options Through The Draft

Outside of free agency, the 2020 NFL Draft will have great options at football’s most important position. The Giants were heavily scouting Oregon quarterback Justin Herbert in 2018 before he decided to stay at school for another year. He will be in the 2020 NFL Draft and if the Giants do not have a young quarterback by then, they will be more than interested in Justin Herbert.

Justin Herbert threw 29 touchdown passes in 2018 to only 8 interceptions. He also threw for 3,151 passing yards. Herbert decided to stay in college for one more year, but he will be a highly-ranked prospect in 2020.

Two more quarterback prospects are worth keeping an eye on for the 2020 NFL Draft. Georgia’s Jake Fromm and Alabama’s Tua Tagovailoa could be in next year’s draft class.

Both of these quarterbacks will be juniors next season, so it is possible that neither of them declares for the draft next offseason. However, if they do, they will both draw top-10 interest, just like Justin Herbert.

In 2018, Jake Fromm threw for 2,761 passing yards with 30 touchdown passes and only 6 interceptions. Fromm helped lead the Georgia Bulldogs to an outstanding 11-3 record in 2018. Georgia made it to the SEC Championship and lost to Alabama.

Alabama’s quarterback Tua Tagovailoa lead his team to a 14-1 record. Tua was able to throw for 3,966 yards and 43 passing touchdowns as a sophomore in 2018. Alabama made it all the way to the College Football Championship before losing to Clemson.

Clemson’s football team features the crown-jewel of quarterback prospects: Trevor Lawrence. Trevor Lawrence stepped in as a true freshman and threw for 3,280 passing yards with 30 passing touchdowns and only 4 interceptions. Lawrence was so impressive in 2018 that he drew comparisons to Peyton Manning, Andrew Luck, and John Elway. Some analysts think Trevor Lawrence could succeed in the NFL if he were able to play in it today.

Trevor Lawrence would be an awesome player for the Giants to draft, however, waiting until 2021 to draft a quarterback seems dangerous. Waiting until 2021 could potentially waste two years of Saquon Barkley’s career and rookie contract.

The Giants have plenty of future options at quarterback. Fans everywhere should hope that they pick the right one and do so as soon as possible.