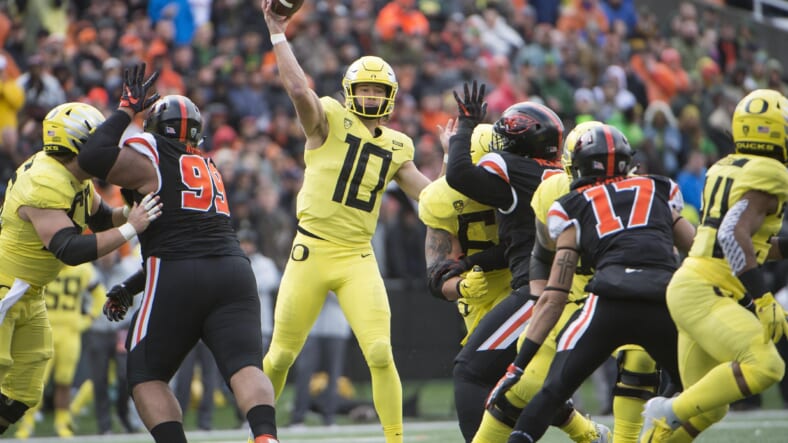 With the 2018-2019 NFL regular season coming to a close this week, playoff-eliminated teams will be turning their attention towards the offseason. With the offseason comes the NFL Draft. In 2018, five quarterbacks were selected in the first round of the draft. With the second overall pick in the 2018 draft, the Giants selected running back Saquon Barkley. Barkley has proven to be a generational talent, but many fans still wish the Giants selected a quarterback.

Oregon Quarterback Justin Herbert Will Not Declare In 2019

One quarterback that Giants fans were looking forward to their team potentially drafting this season was Oregon’s junior quarterback Justin Herbert. It has been a rumor all season that Herbert will stay at Oregon for his senior year. On Wednesday, December 26, Justin Herbert confirmed that the rumors were true. He has decided to stay at Oregon for his senior year. Many draft analysts had Herbert going in the top ten of this year’s draft. Herbert has the prototypical NFL quarterback frame, standing tall at 6’6″ and weighing in at 234 pounds. This makes scouts love Herbert.

On top of his physical traits, scouts love Herbert’s on-field talent. This season, Herbert tallied 2,985 passing yards on a 59.5% completion percentage. Herbert also threw 28 touchdowns to only eight interceptions. He also added two rushing touchdowns on the season. Such great statistics will leave fans wondering why Herbert decided to stay in college one more year.

There was one more present under the tree. #GoDucks pic.twitter.com/ALeRv0zc1G

Why Justin Herbert Is Staying In School

Justin Herbert could have chosen to make millions of dollars in the NFL this season. On top of that, Herbert was considered by many to be the top quarterback prospect in this draft class. There is no guarantee that Herbert will even be a top three prospect in next year’s draft class.

Despite all of this, Justin Herbert has decided to stay at Oregon for his senior year. Justin Herbert is a Eugene, Washington native who grew up with a deep love of the University of Oregon. Since joining the Ducks, it has been Herbert’s mission to bring Oregon back to its winning ways. On top of his love for the school and unaccomplished college mission, Herbert has a brother committed to playing for the Ducks next season. Justin’s brother Patrick Herbert will be playing tight end for Oregon next year, and the two brothers look forward to playing together.

Who Should The Giants Scout Now?

Giants quarterback Eli Manning turns 38 years old in January. The 15 year veteran has seen a regression in play over the past few seasons. His decreasing play and his massive contract are two big reasons why the Giants might look to move on from Manning during the 2019 offseason. The Giants no longer have Justin Herbert as an option in the 2019 draft, but they do have a few other options.

The Ohio State signal caller received a first round grade from the draft advisory board this week. There are no other quarterback prospects who are considered definite first round players at this point. Haskins Jr. is separated from the pack, however he too is a junior who has yet to make a decision. It is reported that after next week’s Rose Bowl, Haskins Jr. will meet with family, friends, and coaches and come to a decision.