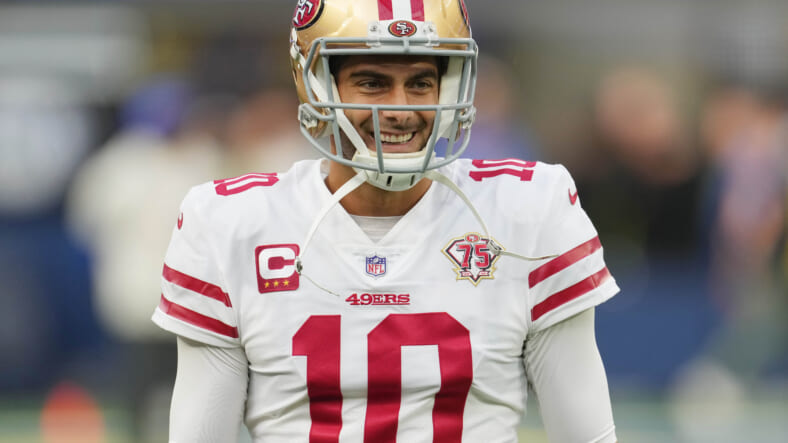 The New York Giants still don’t know what they have in quarterback Daniel Jones. They are prepared to put him to the test in 2022 to find out his real potential. With Brian Daboll and Mike Kafka taking over the offensive playcalling and development, Jones should have a much more proficient system to work around.

Management also spent serious assets improving the offensive line and adding playmakers to the equation. However, one NFL analyst believes that the Giants could be involved in the trade market for a potential veteran quarterback.

David Carr of NFL Total Access stated that the New York Giants could be monitoring the Jimmy Garoppolo’s trade market:

“I initially thought Brian [Daboll] would make a move for Mitchell Trubisky when he was available because you don’t necessarily know what you have in Daniel Jones,” Carr said. “Now with Jimmy, I think the issue is his shoulder. No one really knows. I think what teams are going to do is wait until the first or second preseason game — if Jimmy gets in for San Francisco — and just kind of see. Like, does he look healthy? And then I think that’s when you might see the Giants make a move.”

Acquiring Garoppolo would be silly for the Giants. He’s in the final year of a five-year, $137.5 million deal. He will count $27 million against the salary cap this season, and given the Giants only have $6 million available, the numbers simply don’t add up. Unless they extend him immediately and reduce his cap hit this season, the Giants don’t make much sense.

Do the New York Giants need an injury liability at quarterback?

In addition, Garoppolo has been injury prone over the past few seasons, playing all 16 games just once in his career. However, Carr believes that Garoppolo can win football games, which is all that matters for teams like the Giants.

“Jimmy G can win some games for somebody. He absolutely still can play at a high level — he won a lot of games in San Francisco. I think the only issue is just his health. If he’s healthy, then very possibly the Giants can make a move.”

Last season over 15 games, Jimmy recorded 3,810 yards, 20 passing touchdowns, and 12 interceptions. He posted a 68.3% completion rate. While his stats are far more proficient than Jones’s, he is not a good long-term plan for a team that needs to build around the rookie QB window.

Overall, this rumor should die right where it started. Not only do the Giants not have enough money to acquire Garoppolo in the first place, but giving up draft capital for an injury-prone player who has failed miserably to win games in the postseason would be malpractice.