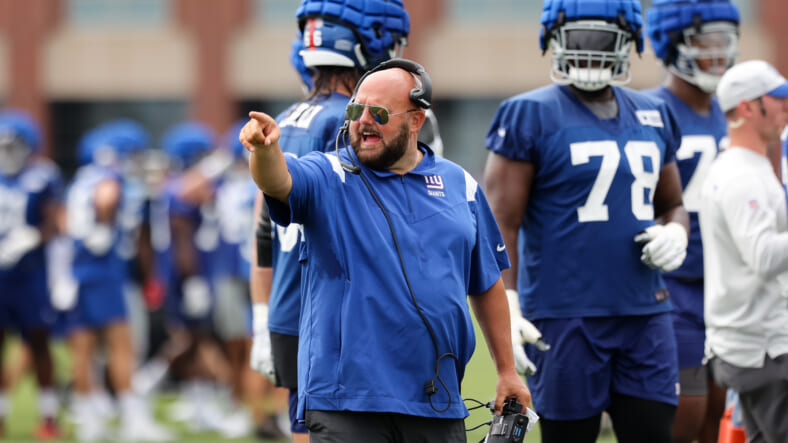 The New York Giants released their unofficial depth chart ahead of the first preseason game on Thursday. Big Blue has been working out a number of kinks in the roster and trying to curate competition at multiple spots of weakness, but there weren’t many surprises in the first look at the depth chart.

Starting off with the receivers, Kenny Golladay, Wan’Dale Robinson, and Kadarius Toney are the primary starting receivers. Darius Slayton is WR4 with CJ Board, Richie James, and David Sills competing on the back end for snaps.

Interestingly, Slayton has been working with the backups the past few days, indicating a potential drop in the standings, especially with James showcasing good hands and special teams compatibility.

The offensive line is as expected: Evan Neal at right tackle, Mark Glowinski at right guard, Jon Feliciano at center, and Andrew Thomas at left tackle. The only position up for grabs is left guard, with Shane Lemieux currently penciled in with the first team and fourth-round rookie out of UNC Josh Ezeudu as the second option.

At tight end, the Giants have Daniel Bellinger as the TE1 with Chris Myrick as the second option ahead of Jordan Akins. Ricky Seals-Jones has been nursing an injury and has missed all of camp, firmly cementing Ballinger as the starter.

Of course, the quarterback position is rather obvious, with Daniel Jones as QB1 and Tyrod Taylor as the backup.

Defensively, the Giants have a clear picture of what the starting team will look like. Dexter Lawrence will man the nose tackle spot, Leonard Williams is listed at defensive tackle, and Azeez Ojulari is under the defensive edge position category.

Kayvon Thibodeau is the first team pass rusher with Oshane Ximines behind and Quincy Roche as the third option.

At linebacker, the Giants have Blake Martinez as the primary and Tae Crowder as their starting weak side linebacker. At cornerback, Adoree’ Jackson is clearly to see CB1, and Aaron Robinson is penciled in at CB2 with Rodarius Williams as the backup for both spots.

At nickel, Darnay Holmes has had a tremendous Training Camp up to this point, locking down the starting slot position.

Cor’Dale Flott is listed as the CB2 at nickel, despite earning some reps on the outside behind Robinson the past few days. Julian Love expected to start a strong safety with Dane Belton penciled in as the second option. Of course, Xavier McKinney locks down free safety with newly signed Andrew Adams behind him as reinforcements.