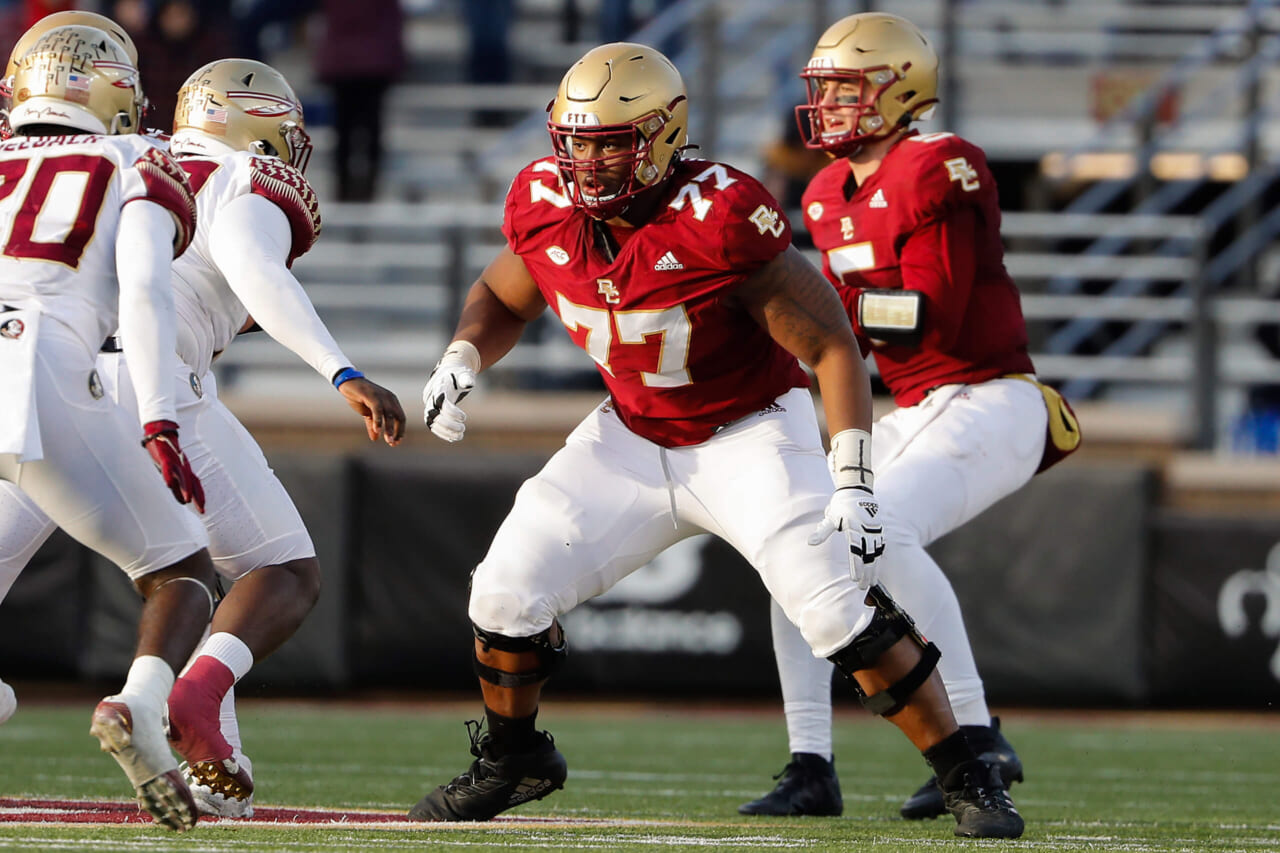 The New York Giants are interested in trading down in the first round of the upcoming 2022 NFL Draft. The Giants hold two top-ten picks in this year’s draft. The fifth and seventh overall picks are highly valuable and the Giants could greatly improve their team with this draft capital. New York has the ability to draft two top-ten prospects with these picks. But they could also trade down in the first round and gain even more capital. The Giants are almost inevitably drafting an offensive lineman in the first round of this year’s draft. Could they target two offensive linemen in a trade-down scenario?

The New York Giants offensive line has been an atrocity for years. It is an issue that new general manager Joe Schoen plans on fixing immediately. Schoen will address this need in the draft, reportedly with more than one pick. He could place a heavy emphasis on rebuilding the offensive line and invest two first-round picks into the position group.

The Giants are inevitably landing one of the top offensive tackles in this year’s draft class with the fifth overall pick in the 2022 NFL Draft. Either Evan Neal, Ikem Ekwonu, or Charles Cross are likely to wear a Big Blue cap on Thursday night. But these prospects will not fall outside the top ten. The Giants could target other offensive linemen to pair with these tackles later on in the first round, though.

After drafting a tackle with their first pick, the Giants could target an interior offensive lineman with their second pick. There are a few prospects that make sense in a trade-down scenario. Iowa center Tyler Linderbaum, Texas A&M guard Kenyon Green, and Boston College guard Zion Johnson could be late first-round picks.

Walking out of the first round with two potential long-term starters on the offensive line would be a dream scenario for the Giants. New York could then focus its attention on other positions of need during the later rounds of the draft and look toward the future with comfortability regarding their front line. If the New York Giants trade down in the first round of the 2022 NFL Draft, they should consider targeting a second offensive lineman to create a foundation up front for years to come. 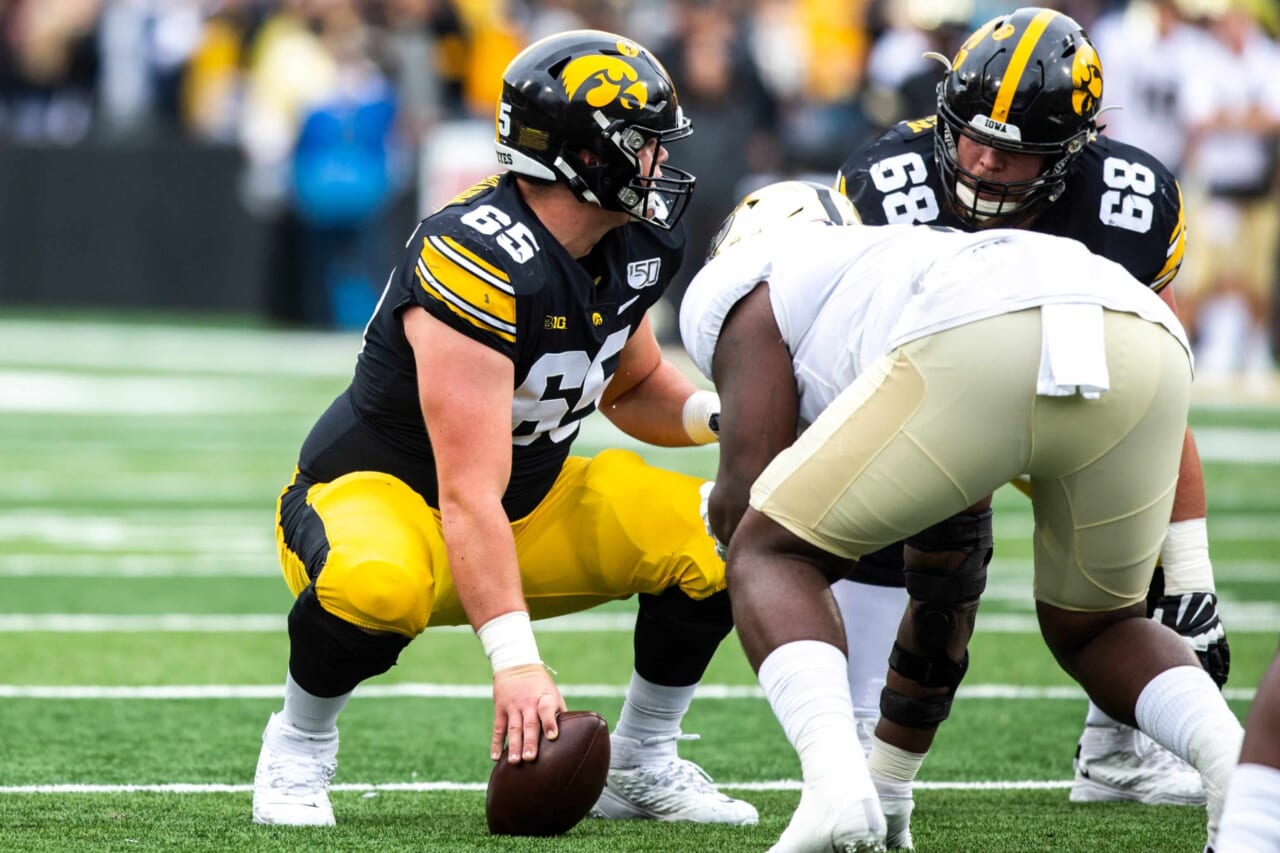 The New York Giants are rich in draft capital entering the 2022 NFL Draft. The Giants possess nine picks including two selections inside the top-ten overall in the first round. The Giants are in need of offensive line reinforcements this year, and they are also reportedly interested in trading down from one of their two top-ten picks. In a potential trade-down scenario, the Giants could target Iowa center prospect Tyler Linderbaum.

What could Tyler Linderbaum bring to the Giants?

Tyler Linderbaum was, at one point, looked at as a potential top-ten draft pick in this year’s class. However, the Iowa center has seen his draft stock plummet over the past couple of months. Now, some believe Linderbaum could wind up being a second-round draft pick.

The Giants should drool if they see Tyler Linderbaum sitting on the board when they are on the clock in the second round. However, it seems more likely that Linderbaum will end up being a mid-to-late first-round draft pick. This could make him a target for Big Blue as they are reportedly looking to trade down this year.

Tyler Linderbaum was Pro Football Focus’s highest-graded player in college football in 2021 with a 95.4 overall grade. Linderbaum is a supremely athletic interior offensive lineman who has the ability to dominate in the running game.

Highest graded seasons by a center since '17 (PFF)

Tyler Linderbaum had all of the talent in the world to dominate the college game. But his short arms and undersized frame has damaged his draft stock significantly. Linderbaum is 6-foot-2, 296 pounds with arms measured at 31 1/8 inches. He tested well athletically at his Pro Day, but still received criticism for being undersized.

Jon Feliciano was signed to play center by the New York Giants this offseaso. However, Feliciano also has experience playing guard, which he could transition back to playing if Linderbaum were drafted. The Giants could draft Tyler Linderbaum and enjoy his services as a day-one starter on their offensive line. He has his weaknesses, but there is no denying the production that Linderbaum achieved in his collegiate career at Iowa, a university that has turned in tremendous offensive line prospects to the NFL in recent years. 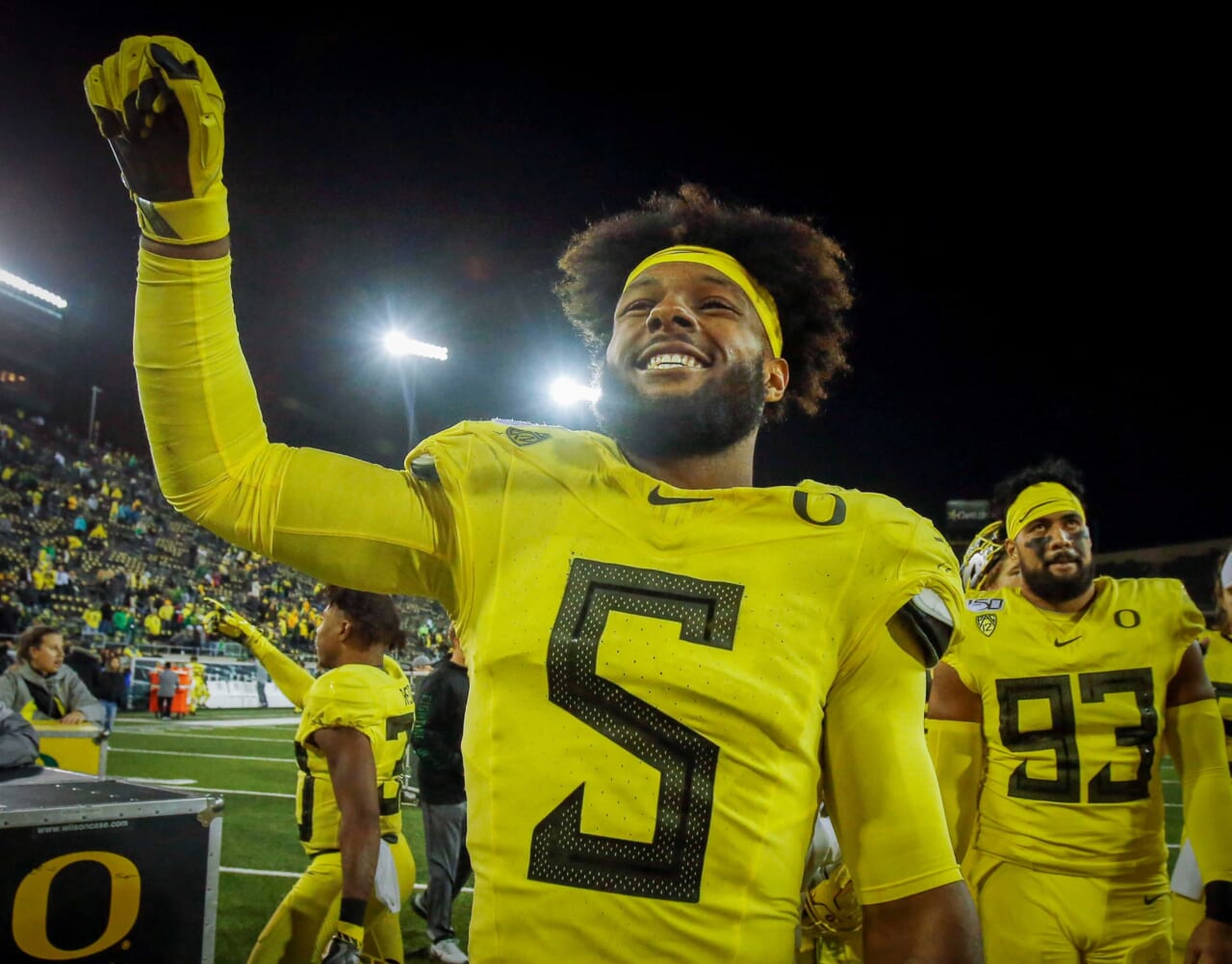 Kayvon Thibodeaux to the New York Giants seems like an unlikely scenario, but Pro Football Focus doesn’t see things the same way. Thibodeaux, of course, has been considered a likely number one overall pick for much of last year. More recently, predictions on who will be the top selection have become more varied. With Aidan Hutchinson and Evan Neal gaining more relevance in the discussion, Thibodeaux being first off the board isn’t guaranteed.

But could the pass rusher fall all the way to the Giants at number five? According to PFF, yes.

Thibodeaux coming off the board at No. 5 might feel like a “fall,” given that he was the consensus No. 1 overall pick just a few months ago. But after learning more about the class, it makes more sense that his range falls between Pick 1 and Pick 5.

He still could very well be the first player taken in the draft, but if he’s not, there’s no guarantee he’s the next name after that. His natural gifts as a pass-rusher make him a top-five lock, but I’ll give some hope to Giants fans because I do think it could play out like this, given the talent at the top of the class and the potential team needs in the top five.

With the Giants being reliant on Azeez Ojulari and Leonard Williams right now for their pass rushing needs, it makes sense to add more depth to the position with a top talent.

It depends, of course, on availability. But with other prospects gaining ground, it isn’t as far fetched as it was before that Thibodeaux could fall this far.

Interestingly, this mock draft also has the Giants taking a center higher than the expected range for the position. It’s an unusual pick, but when that center looks like the best interior offensive lineman in this class, you have to consider it. There’s also reason to believe that, based on his history in Buffalo, Joe Schoen would use this pick on upgrading the offensive line.

The Bills have honed in on the trenches in each of their last three drafts — all five of their first and second-round picks since 2019 were spent on either offensive line or defensive line.

Here, they went with a dynamic, high-ceiling pass protector at No. 5, and I bet Schoen is one of those GMs who simply says, “we’re going to draft great football players in the trenches.” Linderbaum is one of them.

With seriously bad O-line play over the past years, it’s hard to argue that the Giants should be picky when it comes to getting new talent for that position group. Even if Linderbaum is a center, taking him at number seven would be a worthwhile selection if it means drafting an offensive line talent that will remain a starter long-term – something the Giants flopped at under Dave Gettleman.

Combine the addition of Linderbaum with free agency and a more experienced Andrew Thomas returning at left tackle, and the line might end up looking a lot better compared to before this offseason.