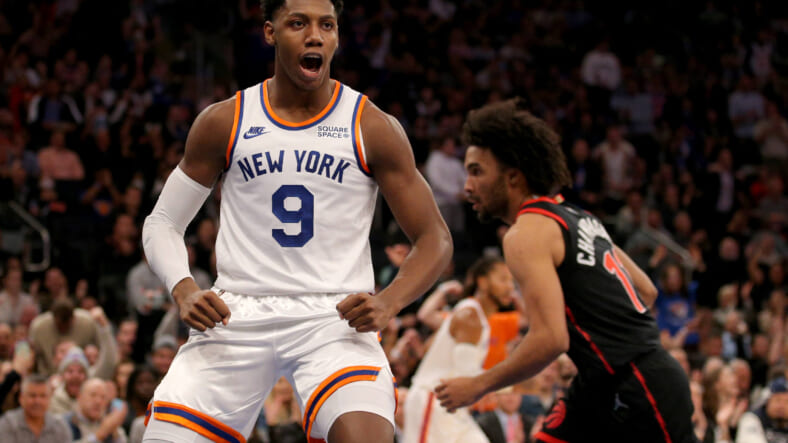 Despite letting Donovan Mitchell slip through their hands, the New York Knicks still had a solid offseason.

They have plugged their most glaring hole, prying Jalen Brunson away from the Dallas Mavericks. Brunson, a breakout star in the playoffs, is the best point guard the Knicks had in decades.

Their other free agent pickup, Isaiah Hartenstein, is set to provide another dimension to the Knicks’ center rotation with his shooting.

Other than these two significant additions, the Knicks’ core is intact. They will also get an additional boost with fit-again Derrick Rose arriving in training camp on his rookie weight.

ESPN’s front office insider Bobby Marks is bullish on this Knicks roster, banking on the internal growth of their young core led by RJ Barrett, who signed a $107 million rookie extension contract over four years.

“I like this Knicks roster. I don’t like them as a top six, but I like them in that play-in tournament. They can win 45 games here. So I’m bullish on New York.

Marks, like most of the Knicks fan base, is interested to see what version of Julius Randle will show up this season and if Obi Toppin will play alongside him.

Randle had a 10-percent dip from behind the arc last season, which exacerbated the Knicks’ starting lineup spacing issues. It also messed up his psyche as his shooting woes brought out the worst in him, getting several fines for his run-ins with game officials and the fans.

But Randle, who is in the first year of his $106 million four-year extension, said he learned a lot from last season. He looks fit like he did in his All-NBA season and in a jovial mood in the training camp.

How will Randle mesh with Brunson, who will likely have the ball more in his hands?

But with his championship pedigree and even-keeled demeanor, Brunson looks like a perfect fit in the bright lights of the Garden. Familiarity with coach Tom Thibodeau, his father, Rick, who is now part of the coaching staff, and the Knicks’ top brass, will also help Brunson adjust quickly.

“I think I said this a while ago, I’m not a savior in any way, shape or form. I just want to be able to contribute to a team, try to help this team win games.”

Depth remains to be the Knicks’ biggest asset entering the season. If Grimes can’t get past Fournier in the rotation, a second unit with him, Rose, Immanuel Quickley, Obi Toppin and Hartenstein should be one of the most exciting benches in the NBA. Cam Reddish, Miles McBride and Jericho Sims could be the odd men out, but all are capable of stepping up in case of injuries like they showed last season.

If Marks’ prediction holds, an eight-win jump from last season should be viewed as a big win for this Knicks front office, whose patient approach has been refreshing to see in New York.