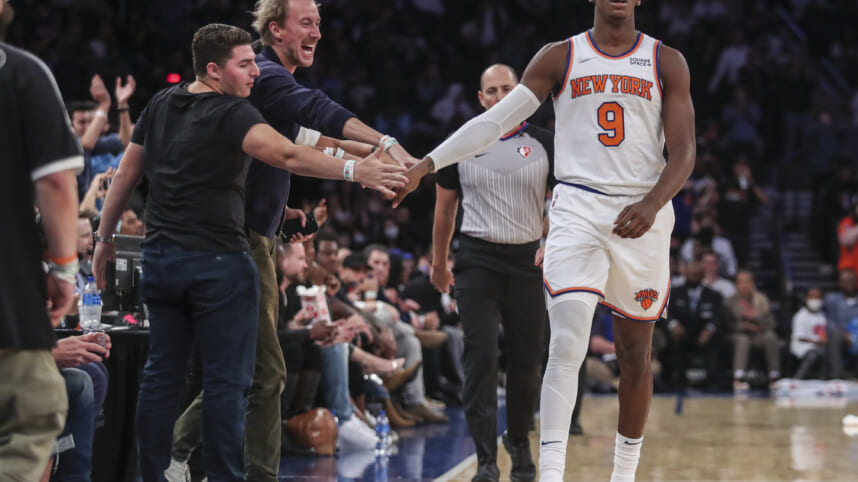 New York Knicks‘ former lottery pick RJ Barrett is a polarizing player in the eyes of scouts and talent evaluators around the NBA. But among his peers, he has plenty of admirers.

After signing the most lucrative contract — $107 million guaranteed money over four years that could reach up to $120 million if he hits the bonuses — in the Knicks franchise history, Barrett is oozing with confidence.

“I’m ready to get into the [NBA All-Star] conversation. I’m ready to showcase what I can be. Every year, I’m getting better. So there’s no better time than now.”

It’s a tall order for Barrett, who hasn’t gotten a fair shake from All-Rookie Team selections to national media’s player rankings since his rookie year.

But this year promises to be different.

Barrett has worked all summer to fill the holes in his game.

He has drawn comparisons to Butler, a two-way force who worked his way up from the end of the first round to become a top-25 player in the league. There are some parallels in how they score — their ability to get into the paint and free throw line to overcome their shaky outside shot and the most talked about common denominator — Tom Thibodeau.

Last season, a 21-year-old Barrett averaged 20 points, 5.8 rebounds and 3.0 assists in 34.5 minutes with a 41/34/71 shooting split. Barrett’s third-year numbers were better than Butler’s except for the free throw accuracy.

“Jimmy talks to me the most. He really knows how to get fouled. Jimmy can get you on these little cheap things all the time. And then he’ll laugh and he’ll be like I’ll tell you later how to do that.”

While Barrett’s personal goal is to become an All-Star next season, he knows that would be easier to reach if he becomes a catalyst to winning in New York. To achieve that, he hopes to continue growing like Butler doing the Thibodeau way — play tough defense.

With only point guard Jalen Brunson and backup center Isaiah Hartenstein as the Knicks’ significant additions in the offseason, the toughest matchups will again fall on Barrett’s broad shoulders. Last season, he faced the league’s toughest matchups than 95 percent of the league, per Bball Index.

“It’s competing, man! I love the challenge. If I’m able to score points to help the team that way but then also help shadow and lock down other teams’ best players, that puts us in a better position to win.”

Barrett had set the bar high. But if Butler and James prove right, Barrett’s critics are up for awakening this coming season.