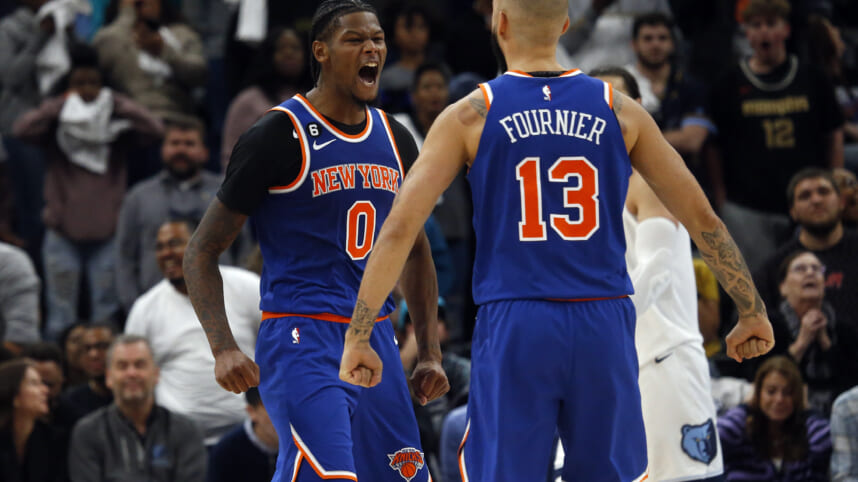 After botching several opportunities in the preseason, Cam Reddish made sure he seized it in the game that counts.

The former lottery pick sent the game into overtime with a corner trey that he hardly hit in the preseason.

The 6-foot-8 Reddish scored 14 of his 22 points in the fourth quarter and extra time. He provided a big lift on a night his former Duke running mate RJ Barrett couldn’t buy a bucket.

Reddish made the most out of his latest opportunity, connecting on 9 of 15 shots, mostly on transition attacks.

He got a surprise spot in the second unit after second-year wing Quentin Grimes sat out with left foot soreness again.

But more than his offensive explosion, Reddish proved he could be as lethal on the defensive end.

During Reddish’s 28 minutes on the floor, the Grizzlies’ effective field goal percentage dropped to its lowest (42.2 percent from as high as 49.3 percent). His length and athleticism bothered the Memphis’ guards and wings which led to four stocks (three steals and one block). He also contested three shots, recovered two loose balls and had one deflection in a solid defensive effort that impressed Thibodeau.

“[I liked] every aspect of [Reddish’s game]. I think his defense got him going. Then he got out into the open floor. His shot selection was good. He attacked the rim well and got some easy buckets. When you get some of these buckets, then the game becomes easier. So that was a big plus, and his length is important for us.”

Reddish’s grit and hustle got rewarded with 28 minutes of playing time, his most since his trade to New York in January. Only Isaiah Hartenstein (16 points, eight rebounds, four assists and one block) played more minutes (40) than him among the reserves to fill up for starting center Mitchell Robinson, who got into foul trouble.

Reddish and Hartenstein carried the Knicks’ second unit as Immanuel Quickley, Obi Toppin and Derrick Rose were a measly 3 for 19 from the field. The duo finished the game with the starters.

Reddish’s breakout performance came on the heels of a dreadful 21.4 percent shooting in the preseason games. With Grimes looking to make his season debut on Friday against the Detroit Pistons, Reddish gave Thibodeau something to ponder as they head home to New York.

He certainly deserves another shot at a rotation spot. Based on Thibodeau’s postgame comments, it looks like a lock that Reddish has earned it.