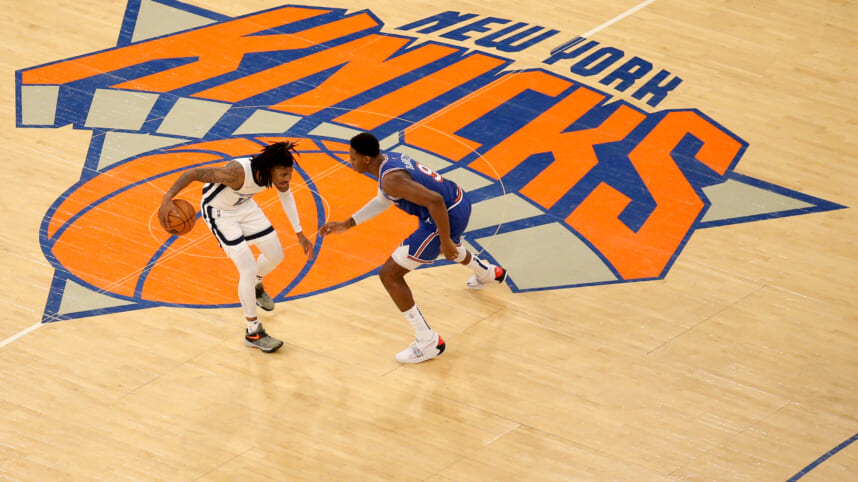 RJ Barrett is set to become the highest-paid player in the New York Knicks franchise history.

But his $120 million ($107 million in guaranteed money) four-year extension pales in comparison to what his other prominent draft peers got.

Zion Williamson, his former Duke running mate and top pick of their draft class, Ja Morant, the no. 3 pick, and fifth overall pick Darius Garland all secured the rookie max extensions worth up to $231 million over five years.

While Barrett was raised “not to watch other people’s pockets,” facing his draft classmates always gives him extra motivation.

On Wednesday night in Memphis, Barrett begins his fourth year — another tour to prove his doubters wrong — against Morant.

“[Morant] is a really good player. And just like a lot of other players in league, but when you go in [and play against him], definitely there’s motivation [because we belong to the same] draft class. I have always said I’m always trying to prove myself. So [it’s] just a motivation and everybody [from that draft class] is trying to be the best. So everything’s really just a motivational kind of thing. I always get excited to play against them.”

Barrett quietly put together a solid preseason in the run-up to Wednesday’s face-off with Morant. The 22-year-old Knicks starting wing averaged 19.8 points on an efficient 48.2 percent shooting. Half of it was because of Jalen Brunson, whose presence bent the defense, giving Barrett more room to operate on offense. But the other half was a fruit of his laborious summer.

The lefty Knicks forward polished his finishing at the rim and added new off-the-dribble moves. He also watched films to understand better how to attack and read the defense.

Barrett registered a team-high plus-76 net total over the Knicks’ four preseason games. He only had 1.5 turnovers per game despite averaging a team-high 27.5 minutes.

His three-point stroke is becoming more consistent, hitting 50 percent of his six attempts per game. His free throw shot — another point of emphasis in his summer workouts — improved to a respectable 81.3 percent.

While he did it in exhibition games, not even enough to say a sample size, there were good habits that Barrett formed that could set the tone for his fourth year with the Knicks.

“[The game] has definitely slowed down a little more this year [in the preseason], but the regular season is about to start. It’s about to be a whole different type of intensity.

“Preseason and regular season are completely different. You don’t really know what to expect. You just know that it’s gonna be intense. It’s gonna be a battle, and really the most prepared team is going to come out on top. So we just got to try to keep up with our preparation every day.”

Barrett knows he’s not the most talented nor the most physically gifted from his draft class. But if there is one thing he’s most proud of about himself is his work ethic. New York coach Tom Thibodeau has constantly praised him for doing extra shooting at night.

Barrett knows by heart that hard work beats talent when talent doesn’t work hard. It’s the only way to gain the league-wide respect which has eluded him since his All-Rookie Team snub.

Chalking up a win against Morant will set the tone.