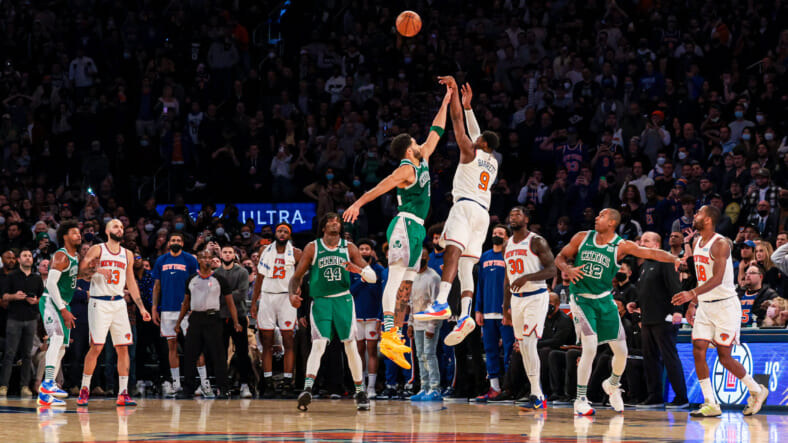 New York Knicks rising wing RJ Barrett got the bag this summer. Now he’s ready to show he’s worth every penny. Or even more than that.

In a workout video released by the NBA, Barrett was seen busting new moves he’s been mastering with his renowned personal trainer Drew Hanlen.

In the two-minute video, Barrett showed an array of off-the-dribble moves and step-back jumpers that were lacking in his game in his first three seasons in the league.

“It’s been great. Summer is really where you can, if you decide to do it right, you can really add things to your game. I’ve been working on this stuff off the dribble, moves that will help me make shots off the dribble and my finishing. I think those two areas — if I’ll be able to clean those up — will help me and the team out along the way, just like make a free throw. I’m making free throws this year!”

The 22-year-old Barrett, who recently inked a four-year rookie extension worth $107 million that could reach up to $120 million, steadily increased his scoring production every year. After posting a career-high 20-point per game, Barrett knows he could have done more if he only shot the ball more efficiently from the floor and on the free throw line.

If Barrett can make a big jump from his paltry 26.8 percent accuracy on pull-up 3s and 34.3 percent overall accuracy on pull-up jump shots, it will, in theory, open the lane for him to score more efficiently than his 19th percentile ranking, per Cleaning The Glass, on shots (169 of 315) within four feet of the basket.

Barrett has set a high bar for himself next season. But joining the All-Star conversation got tougher now with Donovan Mitchell, whom the Knicks heavily pursued even at his expense, moving to Eastern Conference rival Cleveland Cavaliers.

It’s a tall order. But Barrett is undaunted. It’s a good start.