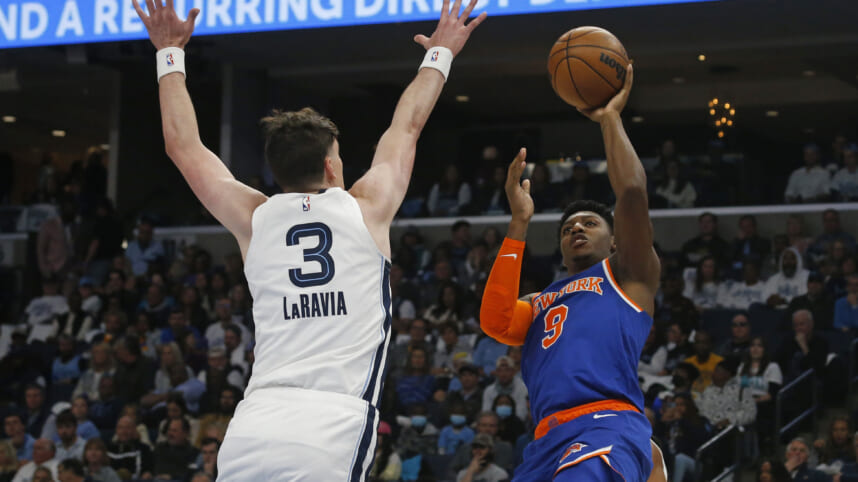 RJ Barrett could not buy a bucket. Still, the New York Knicks came within one loose ball away from wielding the upset ax on the Memphis Grizzlies, the second-best team in the Western Conference last season.

Tyus Jones hit a clutch triple off a loose ball scramble with 47.8 seconds left as the Grizzlies survived a hard-fighting Knicks, 115-112, in overtime Friday night at the FedEx Forum.

The Knicks had a chance to send the game into another overtime after Jones muffed two free throws but Evan Fournier could not convert a good look from the corner.

In the face-off between the No. 2 and the No.3 picks of the 2019 NBA Draft, Morant delivered a performance worthy of his supermax rookie extension.

The Memphis superstar dropped 34 points and nine assists on one jaw-dropping play after another as he carried the Grizzlies on his lean shoulders.

Barrett could not keep in step, missing 15 of 18 shots, including a layup that could have given the Knicks a 100-98 lead. Instead, his missed shot led to a Morant two free throws off a Julius Randle loose ball foul.

It was Cam Reddish who stepped up.

With Quentin Grimes out with a foot injury, Reddish seized the opportunity. The 22-year-old forward played his best game in a Knicks uniform, hitting the three-pointer that sent the game into overtime and a fastbreak dunk in transition that tied the game for the last time at 112-all.

Reddish finished with 22 points on 9 of 15 shots. Making a strong case to make the regular rotation, the 6-foot-8 forward also collected five boards, three steals and one block.

Isaiah Hartenstein also played out of his mind, filling in for the foul-infested Mitchell Robinson. The backup center chipped in 16 points, eight rebounds, four assists and one block in a career-high 40 minutes.

Julius Randle also stood out before fouling out.

Playing with the same intensity and the European style he teased in the preseason, Randle led the team with 24 points on an efficient 9 of 16 shooting night. He added nine rebounds and six assists, but his absence in the final 4:36 was telling for the Knicks.

It was a tough opening-night loss for the Knicks, who showed great resolve climbing out of a 19-point third-quarter deficit to give the Grizzlies a big scare.

But in the end, their big fighting heart was not enough. Last season’s best offensive-rebounding team, the Grizzlies collared 20 off their misses. The last one led to Jones’ game-winning triple.

Jalen Brunson overcame a slow start owing to two quick fouls. He still wound up with a solid 15 points and nine assists without a single turnover in his Knicks debut. He could have given the Knicks the momentum early in the overtime but his fastbreak layup was blocked from behind by Morant, which looked like a foul on replay. The Grizzlies converted the turnover into a Morant eye-in-the-sky play with Brandon Clarke that broke a 108-deadlock.

The Knicks head home, hoping to lick the wounds of this defeat when they host the Detroit Pistons on Friday at the Madison Square Garden. The Pistons pulled off a 113-109 win over their fellow young team Orlando Magic earlier.