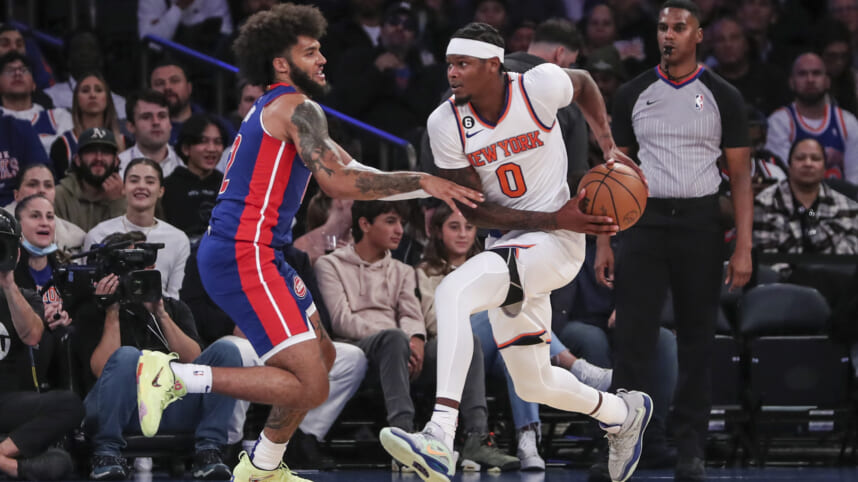 Cam Reddish will likely start the season out of the New York Knicks’ rotation once again.

Reddish failed to take advantage of Quentin Grimes and Evan Fournier’s absences as he struggled with his shot. Perhaps feeling the pressure to deliver and make an impression, Reddish seemed to cave in.

The former lottery pick was a miserable 2-for-13 from the field in the Knicks’ first two preseason games. But if there’s a silver lining, the Knicks have outscored their opponents by an average of 11 points when Reddish was on the floor.

But with Grimes and Fournier poised to return, Reddish could find himself the odd man out. His uninspiring shooting performances certainly did not help his case.

“I shot the ball terribly. But I showed flashes here and there. I did what I could. Obviously, it’s a lot different than what I’m accustomed to. But I’m trying to figure it out.”

Reddish has all the tools to become a solid wing defender and versatile scorer with his 6-foot-8 frame and a 7-foot-1 wingspan. But his preseason play have raised more questions than provide answers.

Can he put it all together and realize his potential? Will Tom Thibodeau give him a shot if the entire roster is healthy?

When asked about Reddish’s shooting struggles, Thibodeau’s response was encouraging.

“I want all our players to understand — you can play well without shooting well. [Reddish’s] length, his athleticism, running the floor, getting into the paint. I thought he had several good drives. And then I want him to read — if there’s a collapse, you’ve done your job. Now spray. And so I want to look at the film. But overall, I thought some real good things.”

Reddish is in a bind. And so are the Knicks.

Given his injury history and recent performance, Reddish is unlikely to receive a contract extension before the Oct. 17 deadline. If that’s the case, he will be a restricted free agent next summer.

The Knicks also need to see what they have in Reddish as they gave up a first-round pick to acquire him. Or at the very least they need to showcase him for potential buyers at the trade deadline.

Now more than ever, Reddish needs playing time to prove his worth. But he has to earn it the Thibodeau way.