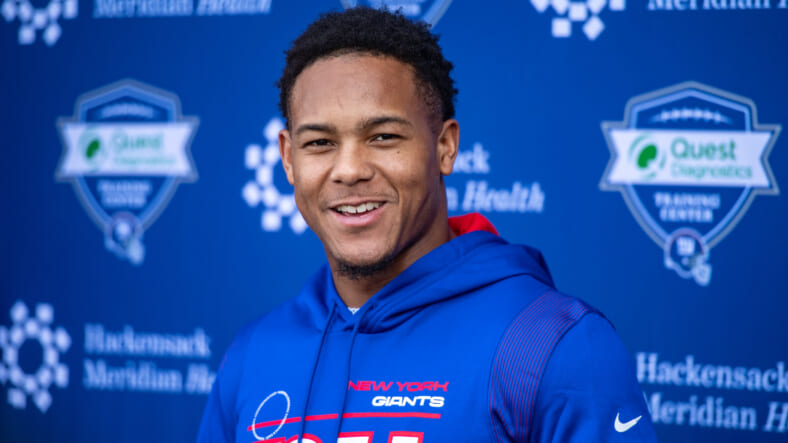 The New York Giants hosted a team scrimmage on Friday night in front of fans for the first time this year at MetLife Stadium. There were a few major takeaways, some of them being negative, notably poor blocking from the offensive line and an inconsistent version of Daniel Jones.

However, rookie receiver Wan’Dale Robinson stood out as an electrifying playmaker that can find space in coverage and produce yards after the catch.

In fact, he hauled in a pass from Daniel Jones, who maneuvered out of the pocket and fired over the middle of the field to an open Robinson, just beating a diving defensive back.

DJ escaping the pocket and making an accurate throw on the run legit made me smile ?

The New York Giants have something special in Wan’Dale:

Robinson has already spoken about the creativity in this offense and how it extrapolates on the strengths of receivers. With Kentucky in 2021, Robinson finished with 1,342 yards, the most in the SEC. He also produced seven touchdowns. At 5’8″ and 179 pounds, Robinson isn’t a tantalizing figure with monstrous size, but he’s incredibly strong, producing 19 benchpress reps, ranking in the 89th percentile.

Robinson is known for his body control and elusiveness, and pairing that with great route running can normally curate production. I expect to see Robinson heavily involved in the screen game, considering he enjoyed 35 screen catches and 268 screen yards during his final season at the college level, ranking 3rd and 4th among receivers in those categories.

However, he’s no pushover on deep passes either, ranking 6th with 16 deep catches last year for 553 yards. Of course, his most lethal attribute is his quickness and agility, producing the 6th most missed tackles forced with 22.

Utilizing him with Kadarius Toney and Saquon Barkley in the wildcat formation is just the tip of the iceberg when it comes to creativity and versatility. Robinson can line up all over the field and wear many different hats for the Giants’ offense moving forward. Considering he was the team’s second-round pick under new management, we should expect him to be heavily incorporated.

Just getting a taste tester of what he can do in a live-action simulation is a huge indication of his capabilities. Dodging defenders and finding small windows of opportunity are just two ways he utilizes his small stature and frame to his advantage.