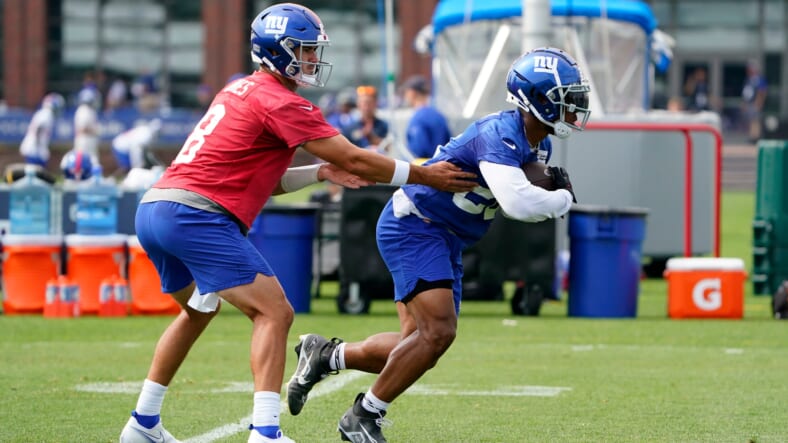 New York Giants running back Saquon Barkley might have missed the memo that unloading massive hits at practice is usually not accepted.

On Monday, Barkley burst through a gap in a running drill, blowing up cornerback Aaron Robinson in the process, starting a fight on the next play between the offense and defense.

Robinson tried to get in the way of Barkley, meeting him at shoulder level, which was obviously a mistake. Normally, you’d want to wrap up a running back around the legs, but the coaching staff likely has a no-tackle rule on Barkley.

Robinson didn’t stand a chance with Barkley running full speed up the gap, completely overwhelming him and sending him flying to the ground.

Saquon took Aaron Robinson’s soul, no wonder the defense was ready to fight after ??

The New York Giants have a rejuvenated Barkley:

Barkley is four years removed from a Pro Bowl season during his rookie campaign. He totaled over 2,000 all-purpose yards and 15 touchdowns. In 2019, he just barely reached over 1,000 rushing yards, scoring eight touchdowns before his career took a turn for the worse.

In 2020, Barkley suffered a torn ACL in Week 2 against the Chicago Bears. He missed the rest of the season and struggled to find his confidence in 2021, rushing for just 593 yards on 162 attempts.

However, with the installment of a new and improved offensive system, Barkley is expected to be a catalyst for the Giants. Head coach Brian Daboll and coordinator Mike Kafka have already implemented more receiving options for Barkley, who recorded 721 yards to the air as a rookie. He’s barely reached that number over his last three seasons combined.

Looking at Barkley’s physique, it seems as if he’s lost a bit of weight and increased his agility. Offering more as a receiver and hopefully having a competent run-blocking offensive line, he could rejuvenate his career. However, he is in the final year of his rookie contract with the Giants, meaning he needs to have a big 2022 season if he wants to land a long-term contract with Big Blue or another squad.