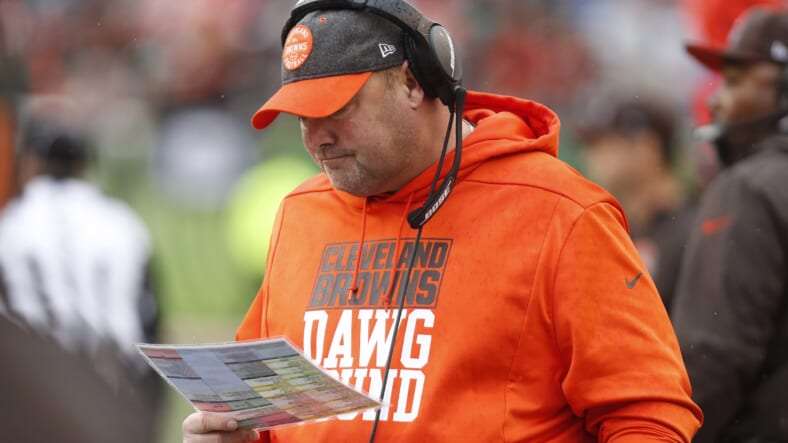 TheÂ New York GiantsÂ introduced Joe Judge today as the franchise’s nineteenth head coach. Judge was a darkhorse candidate that ended upÂ blowing the Giants awayÂ during his interview and securing the coveted job. Since then, Joe Judge has been working onÂ assembling his coaching staffÂ behind the scenes.

News broke Thursday morning that Joe Judge is expected to reach out to former Cleveland Browns head coach Freddie Kitchens to discuss a job within the Giants’ coaching staff (via Jordan Raanan of ESPN). The two worked together at Mississippi State in 2005 when Kitchens served as the program’s running backs coach.

A briefÂ anecdotal storyÂ from Joe Judge regarding a swing set the new Giants head coach built for Freddie’s children led some to connect the dots on a potential reunion in New Jersey. Since then, the speculators have been proven right as reports have indicated that Kitchens is being considered for a job on Joe Judge’s staff.

Freddie Kitchens received much credit for the quick development of quarterback Baker Mayfield in his rookie season. In 2018, Mayfield was the runner up for the Offensive Rookie of the Year award after breaking the rookie touchdown pass record with 27 total.

Another former head coach,Â Jay GrudenÂ was fired this past season by the Washington Redskins. Gruden is one of the NFL’s brightest offensive minds, and Joe Judge could benefit from Gruden’s experience. Gruden was head coach of the Redskins from 2014 to 2019.

Jay Gruden has an interesting connection to the New York Giants. It was reported in October that Gruden never wanted the Redskins to draft quarterback Dwayne Haskins (via Bleacher Report). Instead, Gruden wanted Daniel Jones, the Giants’ first-round quarterback. Judge could use Daniel Jones to lure Gruden onto his coaching staff.

Jay Gruden is a former quarterback who got into coaching. He has worked as an offensive coordinator and as a head coach. Gruden is an experienced coach that has overseen the development of numerous young quarterbacks. He helped turn Robert Griffin III into an electric dual-threat during his rookie season in 2012. He also developed Andy Dalton into the Bengals’ starter as they went to the playoffs three straight years together.

The Dallas Cowboys, like the Redskins and Giants, fired their head coach this season.Â Jason GarrettÂ had served as Dallas’s head coach from 2011 to 2019. The Giants expressedÂ interest in Garrett as head coachÂ before striking a deal with Joe Judge. But if they like what they see from Garret schematically, he could receive consideration as the team’s offensive coordinator.Â

Jason Garrett has had aÂ top ten offenseÂ seven times in the past thirteen years, and only three seasons with an offense ranked worse than the fifteenth. The Giants could see Garrett as a potential upgrade on offense. He has an excellent track record with quarterbacks, turning to unknowns into competent starters.

Dak Prescott was a fourth-round pick in 2016. Garrett developed Dak into a Pro Bowl talent. Before Prescott, the Cowboys’ quarterback wasÂ Tony Romo.Â Tony RomoÂ was an undrafted free agent that was expected to be- at best- a career backup. Romo’s career began in 2003, long before Jason Garrett was with the Cowboys. But it was not until Garrett became the Cowboys’ offensive coordinator that Romo made himself a household name.

In 2007, the Cowboys hired Jason Garrett as their offensive coordinator. Dallas went 13-3 that season as Romo threw a career-best 36 touchdown passes. This was a significant improvement over the 19 touchdowns Romo recorded in 2006. From then on, Garrett continued to have consistent success on offense as the head coach of the Dallas Cowboys.

Jason Garrett’s offensive success and head coaching experience make him the top candidate for the Giants’ offensive coordinator job. He also has an excellent track record developing young quarterbacks, which would be hugely beneficial for Daniel Jones and the Giants.