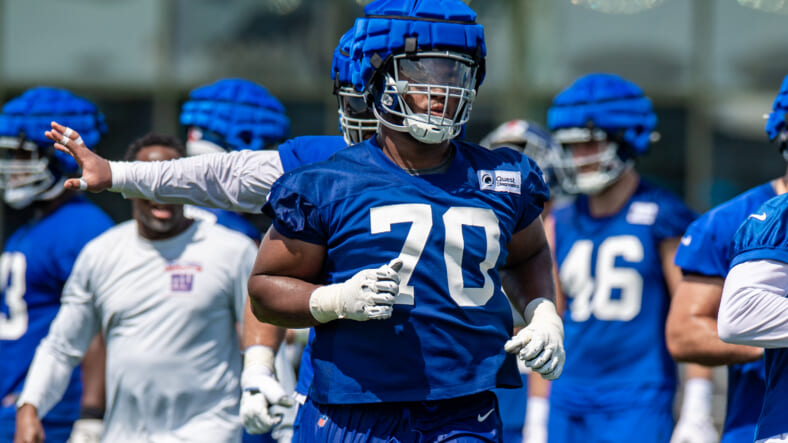 The New York Giants have a long way to go before they are considered a competent NFL team, but they’re headed in the right direction after drafting Oregon pass rusher Kayvon Thibodeaux and Alabama stand-out tackle, Evan Neal.

Neal is projected to be a massive upgrade over Nate Solder at right tackle, and he’s ready to make a positive impact on the Giants’ offense this upcoming season, protecting Daniel Jones efficiently.

After Thursday’s practice, Mike Garofolo and Brian Baldinger of the NFL Network spoke to Neal about his expectations for the offense and how he can put Daniel Jones in the best position to succeed.

“From my perspective of Daniel, from me being around him, he commands the huddle. I mean, he’s the general of the offense and I’m confident in him and everybody else, so I’m just excited to get better with him and just protect for him and block my ass off for him.”

Jones has seen significant regression in his statistics ever since his rookie season in 2019. As a rookie, he tossed 24 touchdowns with over 3,000 yards. However, both of those numbers have decreased gradually leading up to last season, where he threw just 10 touchdowns for 2,428 yards.

The New York Giants are improving, but slowly:

A porous offensive line and disappointing scheme set Jones back years with his development. The hope is that new head coach Brian Daboll and offensive coordinator Mike Kafka can give him a significant boost.

Part of the team’s improvement was overhauling the offensive line, replacing nearly every spot aside from left tackle. Neal is an instant starter that will make a huge impact in the running game immediately as a first-year player in the league.

If there’s anyone that should be ecstatic about the addition of Neal, it is Jones. The constant rotation of turnstile right tackles has put the team back years along with a myriad of other negative factors. However, the arrow seems to be pointing in the right direction finally, but that still doesn’t equate to wins.