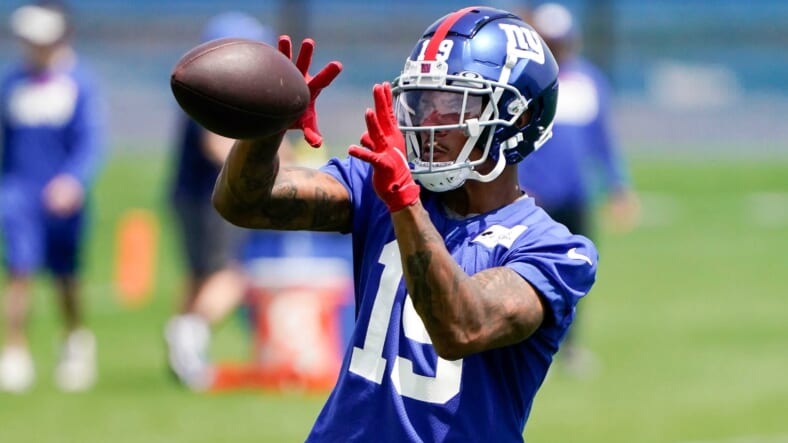 The New York Giants had one of the worst offenses in the NFL last season. They averaged a putrid 17.5 points per game, ranking second-to-last in the NFL. Part of the Giantsâ€™ major struggles offensively was their failure to get the deep-passing game together.

Daniel Jones attempted only 43 passes 20+ yards downfield in 2020. Jones is a conservative quarterback, but this low attempt total is unacceptable in the modern NFL. The Giants also did not have a ton of vertical receiving talent, nor an offensive coordinator that emphasized deep passing. But in 2021, all of that should change.

The New York Giants made plenty of big moves this offseason to improve their offense. Some of the Giantsâ€™ acquisitions seem to indicate that New York will emphasize the deep-passing game this upcoming season. In particular, new additions Kenny Golladay and Kadarius Toney will be a huge boost to the teamâ€™s vertical offense, creating an elite deep-threat duo.

Kenny Golladay is one of the best deep-threats in the NFL. Pro Football Focus ranked the Giants’ new alpha dog as the third-best deep-threat in the league. Golladay was a huge addition to the Giants’ offense as a receiver that will open up their vertical attack on offense.

Per PFF, Golladay ranks fourth among NFL wide receivers in deep receiving yards over the past three years, and he was just nine yards behind third-place despite playing in only 5 games in 2020. KennyÂ Golladayâ€™s 628 yards on deep passes ranked second in the league in 2019 (PFF). KennyG’s production on deep receiving is incredible, but the Giants’ first-round pick Kadarius Toney isn’t too shabby going deep either.

According to Pro Football Focus, 10.7 percent of the Kadarius Toney’s targets in college were on passes 20+ yards downfield. Toney earned an insane 99.6 grade with a perfect 158.3 passer rating when targeted on those deep passes.

Kadarius Toney is one of the most dynamic rookies entering the NFL this year. Not only is he a great deep receiving threat, but he is also a YAC monster that will open up the intermediate passing game, along with the return of superstar running back Saquon Barkley. Kadarius Toney forced a missed tackle on 35% of touches since 2018, which was first among the 2021 wide receiver draft class (PFF). ToneyÂ forced 32 missed tackles on 80 catches the past two seasons (PFF).

Daniel Jones was PFFâ€™s third-highest graded passer on deep balls in 2020 with a 95.6 passing grade. Jones did not throw deep that often, but when he did he made it count. Now, with this influx of talent in Kadarius Toney and Kenny Golladay, Daniel Jones should start slinging it deep more often and the Giants’ offense should enjoy an elite deep-threat duo in 2021.