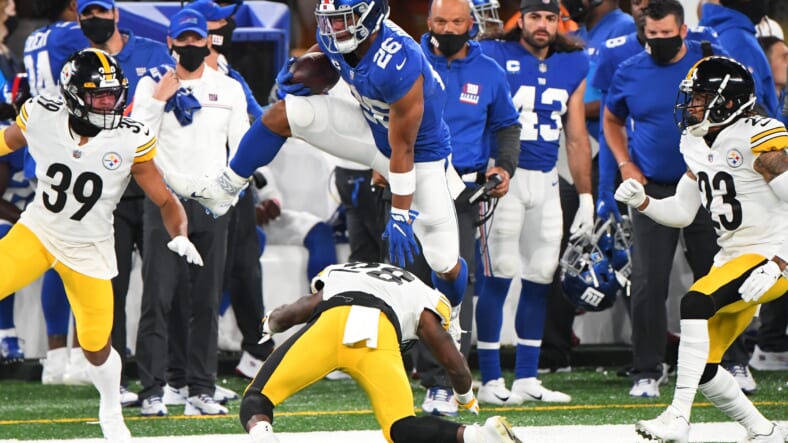 The New York Giants offense was one of the worst in the NFL in 2020. The unit averaged a measly 17.5 points per game, ranking 31st in the league. In Jason Garrett’s first season as offensive coordinator of the Giants, he put a disappointing product on the field. New York had a phenomenal defense in 2020, but their putrid offense held the team back from making a serious playoff push.

The Giants recognized this fault and worked hard to correct it in the 2021 offseason. Dave Gettleman and co. invested plenty of resources into the offense by signing playmakers like Kenny Golladay and Kyle Rudolph in free agency. They then doubled down in the first round of the 2021 NFL Draft, selecting wide receiver Kadarius Toney.

The Giants’ offense was hindered with the loss of its greatest playmaker in 2020, Saquon Barkley. The superstar running back went down with a season-ending ACL injury in Week Two, leaving the Giants without any deadly weapons on offense. The Giants still managed to have a decent rushing attack with Wayne Gallman in the backfield. However, the Giants’ offense severely lacked any receiving threat from the backfield. Now, with Saquon returning to the lineup and the addition of Kadarius Toney to the offense, the Giants have two elite yards-after-catch receiving threats to utilize.

In his dominant 2018 rookie season, Saquon Barkley led the NFL in scrimmage yards (2,028) en route to winning AP Offensive Rookie of the Year. Saquon was incredible running the football that season, but he was just as impressive in the receiving game. In 2018, Saquon Barkley set a New York Giants franchise record with 91 receptions, the most in a single season by a rookie in the team’s history.

Barkley totaled 91 receptions for 721 yards and 4 touchdowns. He was a major focal point in the Giants’ passing attack. Saquon’s receiving workload decreased in 2019 as he was hampered with injuries. In 2021, he likely will not be asked to catch as many passes with the Giants’ influx in receiving talent, but Saquon will be an X-Factor in the passing game. He provides phenomenal receiving skills out of the backfield and elite tackle-breaking ability after the catch as the Giants’ third or fourth receiving option on the field.

According to Ben Linsey of Pro Football Focus, the New York Giants ranked dead last in the league with the fewest yards after the catch per reception in 2020 at 3.0 yards per. Now, with two tackle-breaking machines in the lineup, the Giants’ yards after the catch should improve drastically. In addition to Saquon Barkley’s return to the lineup, Daniel Jones will enjoy the arrival of the human joystick that is Kadarius Toney.

Daniel Jones was one of the best deep-ball throwers in the NFL last season. However, he struggled to gain efficiency in the intermediate portion of the field. Saquon Barkley and Kadarius Toney are the perfect weapons for Jones to utilize underneath. They are quick, shifty players that can catch the ball and take it to the house on any given play. Expect to see a lot more yards after the catch generated by the Giants’ offense in 2021.